There are three other graded stakes races on Woodbine Mile day, conducted under sunny skies and an afternoon high of 22.3 C (72.1 F), with the E.P. Taylor turf course rated good-to-firm (GoingStick reading 9.2). The longest race on the card was the $300,000 Northern Dancer Turf Stakes (G1) for older horses going 1 1/2 miles, one complete lap of the course as the major local prep for the Pattison Canadian International (G1) on October 12. A compact field of 6 faced the starter with Dubai Sheema Classic (G1) winner Old Persian sent off as the 3-5 favorite off a 7th place finish in the Coronation Cup (G1) and a third in the Grosser Preis von Berlin (G1). In to challenge him included 3-1 second choice Tiz a Slam, winner of 3 straight including a course record effort in the Nijinsky (G2) last out, and 4-1 third choice Focus Group, 8th in the Bowling Green (G2).

Jockey Patrick Husbands sent 34-1 longest shot Cooler Mike loose on the lead for the first mile through fractions of 24.82, 47.63, 1:11.88, and 1:37.77 while as many as 12 lengths in front of Tiz a Slam in second, in turn 3 lengths ahead of favorite Old Persian sitting third. Turning for home Cooler Mike tired badly and dropped back to last allowing Tiz a Slam to inherit the lead through 1 1/4 mile in 2:03.09. Jockey James Doyle moved Old Persian out for room at the 3/16 and he powered to the front. Kept to task by Doyle, Old Persian drew off late to win by 2 1/2 lengths over late-running 23-1 Nessy in 2:27.78. It was a nose back to Focus Group third, and a head back to Tiz a Slam fourth. 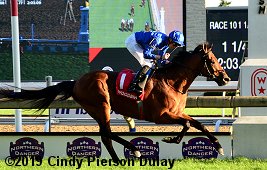 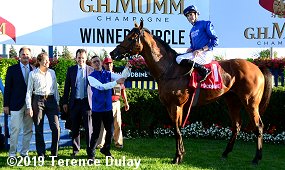 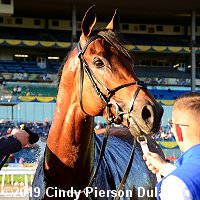 Left: Old Persian in the winner's circle. Winning jockey James Doyle said, "He was more enjoying the crowd rather than what was going on in front of him, which is amazing because he's run some cracking races at Meydan and there is no bigger stand than that. But obviously we were a bit concerned early. He missed the break, but they went pretty quick and we were able to muster some speed down the fence to secure a bit of space. We had a very clean trip all the way through. He's a powerful stayer at this trip with a good turn of foot and when the pace came up in the stretch, he exceled and sprinted away nicely."

Right: Old Persian gets hosed off after the race. 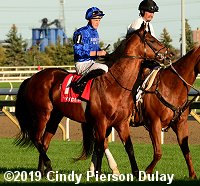 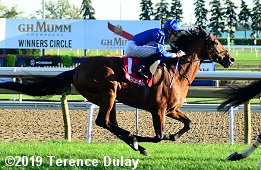 Left: Old Persian behind the starting gate. Alex Merriam, assistant to trainer Charlie Appleby said, "He didn't run great in the Coronation back at Epsom there after a good run in Dubai. We were pleased enough with his run in Germany and I think the ground was a bit on the soft side for him there. But James gave him a nice ride today and it worked out well. I spoke to Charlie and he said we'll go back to Europe, see how he is, see how he comes out of the race and make a plan from there. No immediate plans at the minute."

Right: Old Persian trails the field shortly after the start of the race. 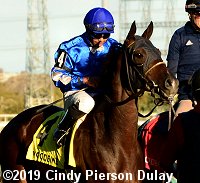 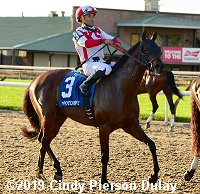 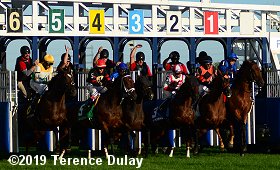 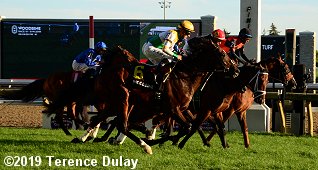 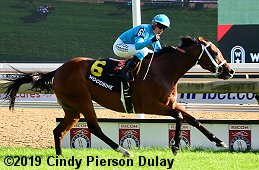 An hour before the Woodbine Mile, the $250,000 Canadian Stakes (G2) Presented by the Japan Racing Association featured a field of 7 older fillies and mares going "about" 1 1/8 miles around 1 turn of the turf. Competitionofideas was sent off as the 6-5 favorite off her 3rd place finish in the Beverly D (G1). In to challenge her included last year's winner and 2-1 second choice Starship Jubilee off her 3rd place finish in the Ballston Spa (G2), and 9-2 third choice Magnetic Charm, 3rd in the Valiant Stakes after finishing a close second in the Sandringham Handicap, both at Ascot.

Jockey Luis Contreras sent Starship Jubilee to the front exiting the chute and she set fractions of 24.64, 49.09, and 1:11.79 while pressed by 33-1 Dixie Moon and stalked by 13-1 Touriga. Turning for home, Contreras asked Starship Jubilee to draw off and she obliged, opening up a 5 length lead midstretch through 1 mile in 1:34.01. Magnetic Charm put in a strong late rally from 6th to no avail as Starship Jubilee cruised to a 4 1/4 length win in 1:45.84. It was a nose back to favorite Competitionofideas third. 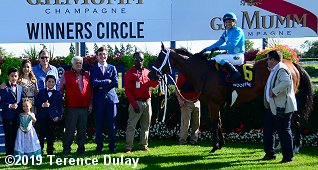 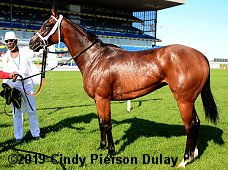 Left: Starship Jubilee in the winner's circle. Winning trainer Kevin Attard said, "She's been consistent all year. 1 1/4 is a tad far for her, probably not her best. I think 1 1/8 hits here square between the eyes there so when we do run her 1 1/4, we do have to ride her and think a little differently. Obviously today, there wasn't any pace and I figured if they were going to let us have the lead, we would take it. She came off a great race at Saratoga, I thought she ran really well. And she came back to work well in the interim. She put it all together."

Right: Starship Jubilee gets hosed off after the race. Winning jockey Luis Contreras said, "Kevin told me just to let her break and if they let me go to the lead easy enough, just go. This one, when she's behind horses, it's kind of tough to make her relax but once she relaxes and comes from behind, she's very aggressive at the end. But today with the conditions of the race and the filly, Kevin brought her in here really, really sharp. It doesn't matter where you put them when a horse is this great." 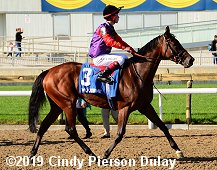 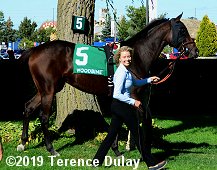 Right: Third place finisher and beaten favorite Competitionofideas in the paddock before the race. The Chad Brown trainee improved her record to 3 wins, 4 seconds, and 4 thirds in 12 starts, earning $585,662 for owner Klaravich Stables. 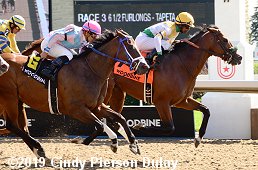 Kicking off the stakes quartet, the $125,000 Bold Venture Stakes (G3) featured a field of 7 older horses sprinting 6 1/2 furlongs on the Tapeta main track. As expected 2017 Horse of the Year Pink Lloyd was originally sent off as the 1-2 favorite off wins in the Vigil (G3) and Kenora. However he was declared a non-starter (see next), resulting in last year's winner Yorkton officially recorded as the 7-5 favorite off a 6th place finish in the Highlander (G1). In to challenge him included 3-2 second choice Curlin's Honor, 3rd in the Play the King (G2) and 11-2 third choice Sable Island, 2nd in the Play the King.

Pink Lloyd broke through the hate and got away slowest of all, trailing for the first 1/2 mile. Jockey Patrick Husbands sent Yorkton to the lead through fractions of 21.68 and 44.29 while pressed by Sable Island and stalked by 27-1 Tringale. Turning for home, Yorkton continued to lead through 3/4 in 1:08.63. 10-1 Ikerrin Road, 6th early, rallied 4 wide but Yorkton held him off to win by a neck in 1:14.96. It was another 3/4 length back to Curlin's Honor third, and a head more to "favorite" Pink Lloyd fourth. After a steward's inquiry into the start, Pink Lloyd was declared a non-starter necessitating a refund of all single-race wagers placed on him. Multi-race bets were assigned the favorite and winner Yorkton. 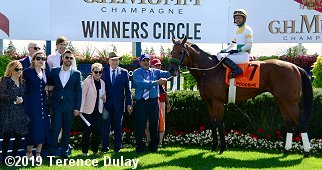 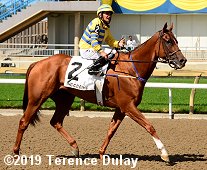 Left: Yorkton in the winner's circle. Winning trainer Stuart Simon said, "He grabbed a quarter really bad in his last race and, talking it over with the guys, we wanted to totally regroup and start over kind of with him and the horse has just been training out of this world. He's just in good order. He's a nice horse when he's right." Jockey Patrick Husbands added, "You still have to show respect for the other horses in there, especially Pink Lloyd, but the last time I breezed him I said, this is what I call a steal job. He's naturally fast and he's a horse that every jockey wants to ride, a fast horse. When I got to the wire (I realized I had enough to get there). I'm happy and proud to be a part of this whole organization. I'm just blessed. I'm happy to be back here and enjoying my year."

Right: Fourth place finisher and beaten favorite Pink Lloyd returns after the race. It was determined he did not get a fair start so was declared a non-starter, making Yorkton the actual betting favorite even though Pink Lloyd was 1-2 before the race started.