The distaff counterpart to the Arlington Million is the $600,000 Beverly D Stakes (G1). A field of 7 older fillies and mares contested this 1 3/16 mile trip over the firm Arlington turf course on Saturday looking for automatic entry in the Breeders' Cup Filly and Mare Turf (G1) under the Breeders' Cup Challenge Series "Win and You're In" promotion. Defending champion Sistercharlie was sent off as the 2-5 favorite off wins in the Breeder' Cup Filly and Mare Turf (G1) and the Diana (G1). In to challenge her included 3-1 second choice Fleeting , second in both the Ribblesdale (G2) at Ascot and the Irish Oaks (G1) at Curragh, and 6-1 third choice Competitionofideas, second in the New York (G2) and the Matchmaker (G3).

Jockey Irad Ortiz Jr. sent 19-1 Thais loose on the lead through fractions of 22.76, 46.23, and 1:09.66 whiile stalked by 15-1 Awesometank and 58-1 Oh So Terrible. Thais continued to lead to mistretch through 1 mile in 1:34.55 before tiring. Sistercharlie, 6th early under John Velazquez, came out 3 wide into the stretch and rallied to win going away by 3 lengths over Awesometank in a new course record 1:52.43. It was another 2 lenghs back to Competitionofideas third. 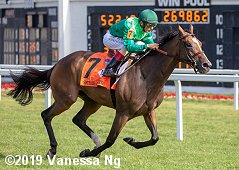 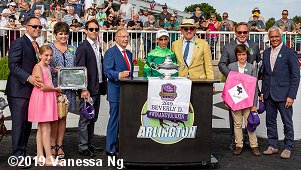 Left: Sistercharlie in the winner's circle. Winning trainer Chad Brown said, "She can run well anywhere, but she sure does love Arlington. She's the horse of a lifetime, really, one of the best I've ever trained. I think she's headed to the Hall of Fame sometime." 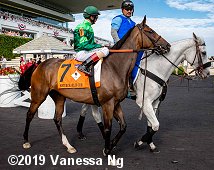 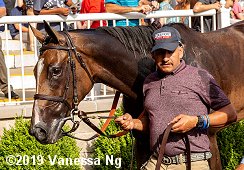 Left: Sistercharlie heads out for the post parade. Winning jockey John Velazquez said, "I wasn't worried at all [about Thais]. I was a little worried about the fillies from Europe. The horse to beat [Fleeting] I thought was behind me, and I was a little more patient. At the 3/8 pole, normally I start passing there. I made sure she went on, and she did it right away, but I had all the confidence in the world in [Sistercharlie]. She always takes care of business."

Right: Sistercharlie in the paddock. She is the only 2 time winner of the Beverly D. 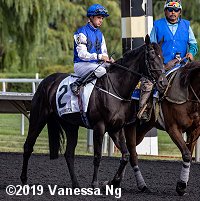 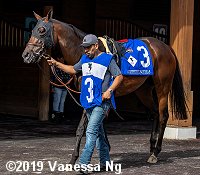 Left: Second place finisher Awesometank in the post parade. Jockey FLorent Geroux said, "We had a great trip, I loved where we were. I looked back and I wondered if Sistercharlie might be too far back. I was riding my race, and we just got outrun – that's the best filly in North America."

Right: Third place finisher Competitionofideas in the paddock before the race. The Chad Brown trainee improved her record to 3 wins, 4 seconds, and 3 thirds in 11 starts, earning $564,968 for owner Klaravich Stables. 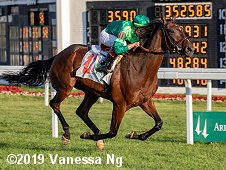 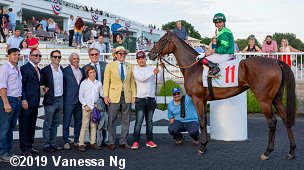 The win completed a Chad Brown sweep of all 4 graded stakes on the card. Brown said, "I'm so proud of my whole team. They all work so hard with these horses and its days like today that all that work pays off. There's a lot of hard work that goes into this, and I'm surrounded by a lot of really talented people. Of course, it's all up to the horses though and I'm so proud of them. They give me their all every single day and that's why I do this job." 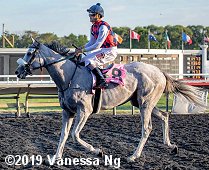 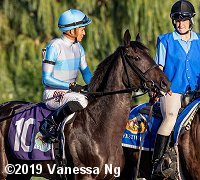