The first Grade 1 event of the 2019 meeting is the $500,000 Diana Stakes (G1), featuring 7 older fillies and mares going 1 1/8 miles over the inner turf course. Conditions were excellent with sunny skies and temperatures in the mid 80's for the 27,120 fans on hand. The main track was rated fast but the turf courses were good. Rushing Fall was sent off as the 8-5 favorite in the field of 6, winner of 4 straight including the Jenny Wiley (G1) and the Just a Game (G1). In to challenge her included 2-1 second choice and last year's winner Sistercharlie, unraced since winning the Breeders' Cup Filly and Mare Turf (G1), and 3-1 third choice Homerique, winner of the New York (G2).

Jockey Manny Franco sent 38-1 longest shot Thais to the front first time by and she set fractions of 22.10, 45.90 and 1:11.51 while pressed by 13-2 Mitchell Road and stalked by Rushing Fall. Entering the stretch, Thais tired to eventually finish last, allowing Rushing Fall to inherit the lead through 1 mile in 1:36.01. Sistercharlie, 4th early under John Velazquez, came out 6 wide for room and rallied to win going away by 1 3/4 lengths in 1:47.93. It was another neck back to late-running Homerique third. 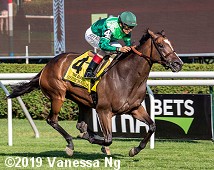 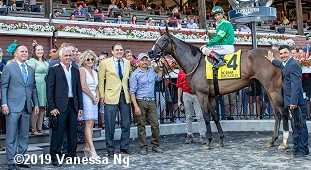 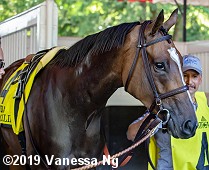 Left: Sistercharlie in the winner's circle. Winning trainer Chad Brown (far left), who trained the first 3 finishers, said, "Another great performance from a great mare. She showed why she's the best. We were going to start her campaign a little earlier in the year, and she got sick on us. We had to wait and he was very patient. She just hit all her works right leading up to this race. We had a nice pace setup from the stablemate [Thais] and Johnny knows this mare so well. I loved where she was throughout the trip. I was worried she was going to be too far back coming off the layoff." Owner Peter Brant added, "She's the most consistent horse I've ever had. Any time she has lost, she's had a major excuse. She's a very special horse. You only get one like that in a lifetime and I'm fortunate enough to be associated with her."

Right: Sistercharlie in the paddock before the race. 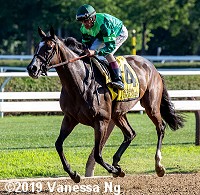 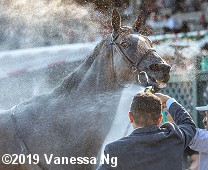 Left: Sistercharlie returns after the race. Winning jockey John Velazquez said, "She normally breaks slow. I made sure to get her a nice position passing the wire for the first time, making sure that the other horse didn't put me in behind her. [Rushing Fall] was the one to beat in my eyes and once I was behind him and relaxed where I thought was in a good position, I bided my time a little bit. By the 3/8 pole, it was time to go, and I know she takes a bit to get going, so I'd rather go wide and get her going than to stay behind the other horses and not get there."

Right: Sistercharlie gets hosed off after the race. 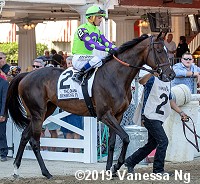 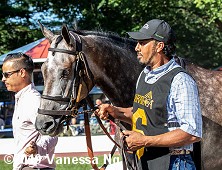 Left: Second place finisher and beaten favorite Rushing Fall heads out for the post parade. Jockey Javier Castellano said, "I had a perfect trip, but Sistercharlie was much the best. I'm satisfied with the way my filly did it today and I'm very proud of the way she ran. We were just second best today. I had a good setup and turning for home I looked up and Sistercharlie was right next to me. I tried to take off, and the filly responded when I asked her, but Sistercharlie was rolling."

Right: Third place finisher Homerique in the paddock before the race. Trainer Chad Brown said, "It's unfortunate one had to lose - that any of the three had to lose. They all ran great races in their own right that would win many Dianas. We knew going into the race we had the top three choices, but then for all of them to run the way they did and finish one-two-three is remarkable. It's unfortunate any one of them had to lose. They all ran winning races, but that's why we ran them. We wanted to settle it on the track. Each of the horses individually deserved this chance today to run, so we gave it to them. This is a special race for me and it was a special race for my mentor Bobby Frankel. It's a race he pointed toward every year and I'd like to think he's very proud today that we ran so well. I do everything he taught me. I mark this race on my calendar every year on the first of the year."


The $150,000 Sanford Stakes (G3) featured a field of 5 two-year-olds sprinting 6 furlongs on the main track. By Your Side was sent off as the 7-5 favorite off his debut win on June 14 at Churchill Downs. In to challenge him included 3-1 second choice Cucina, a maiden winner at second asking at Belmont last out, and 7-2 third choice Raging Whiskey, a maiden winner at second asking at Santa Anita. 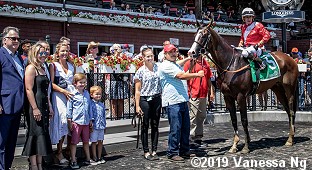 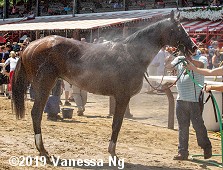 Left: By Your Side in the winner's circle. Winning trainer Eddie Kenneally said, "He's shown that he's the real deal for a while. He's a very professional horse. He just does everything right and relaxed nicely after breaking quick. Irad allowed the speed horses to go on out, and the horse was content to relax on the outside. Perfect position [and] beautiful ride. He's good but might be even better going long. He came to me at Keeneland in April and just continued on from there. He never did anything wrong. He has a very efficient, long stride, and his pedigree says that he wants to go longer. The way he relaxed will help the horse go longer as well."

Right: By Your Side gets hosed off after the race. Winning jockey Irad Ortiz Jr. said, "I got a perfect trip. I had the outside post and he put me in a good spot early. He broke good on top. The speed went and he was second. He was acting like a professional. He relaxed so well and when I asked him to go, he just turned on." 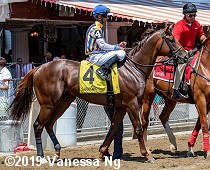 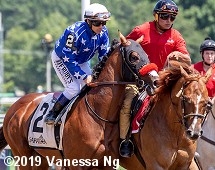