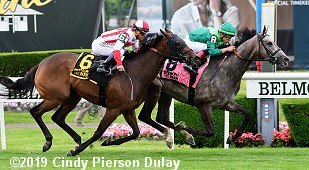 The $600,000 New York Stakes (G2) featured a field of 9 older fillies and mares going 1 1/4 miles on the inner turf. Prix de l'Opera (G1) third place finisher Homerique was sent off as the even-money favorite in the field of 8 off her win in the Beaugay Stakes (G3). In to challenge her included 3-1 second choice Competitionofideas, second in the Beaugay, and 9-2 third choice Holy Helena, winner of The Very One Stakes (G3) at Gulfstream.

25-1 Lady Montdore was quickest away through an opening quarter of 25.24 before 11-1 Giant Zinger took over on the clubhouse turn through easy fractions of 50.45, 1:14.69, and 1:37.96 while presed by Lady Montdore and stalked by 8-1 Semper Sententiae. Turning for home Giant Zinger tired as Homerique, 5th early, and Competitionofideas, last early, moved up to set up a diel to the line after 9f in 1:49.71. Driven home by Irad Ortiz Jr., Homerique outfinished Competitionofideas to win by 1/2 a length in 2:00.60. It was another 3 1/4 lengths back to Semper Sententiae third. 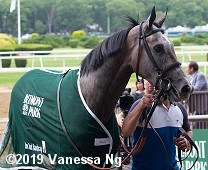 Left: Homerique in the winner's circle. Winning trainer Chad Brown said, "The slow pace was a concern, but fortunately [Giant Zinger] moved early and the pace picked up a bit. Much like yesterday, it opened up and she was able to get through. Homerique saved more ground on the turn and had a shorter distance to the wire, but then again, she had a good amount of energy in reserve. Both horses (Homerique and Competitionofideas) are definitely possible for both the Diana (Saratoga) and the Beverly D. (Arlington)."

Right: Homerique heads back to the barn after the race. Winning jockey Irad Ortiz Jr. said, "I had a perfect trip from the outside post. Even though we don't really like that post we worked it out good. I wasn't so happy with the position I had when we went to the backside, so I made the decision to take a little hold, and drop in, and then get into the pack. She appreciated that. Then she came out of the pack more than in the clear. The fractions were slow, but she handled everything pretty good. She's a very nice horse, a real professional." 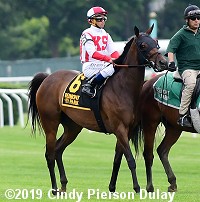 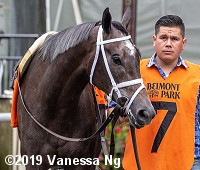 Left: Second place finisher Competitionofideas behind the starting gate. Jockey Javier Castellano said, "She missed the break from out of the gate. From there, I had to use my own judgement, but I think it could have cost me the race. We were too far back. I wish we could've been closer to the pace. Either way, I got beat by a good horse. We were second best today." Trainer Chad Brown added, "She was completely out of position early, which is not uncharacteristic for her, given her lack of early speed. She came around horses and did the best she could to come up short to a really good horse. Unfortunately, one of them had to be the loser after running so well, but we gave them the opportunity to both run well and they both did." 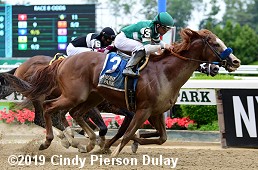 The $250,000 True North Stakes (G2) featured a field of 8 older horses sprinting 6 1/2 furlongs on the main track. Breeders' Cup Dirt Mile (G1) 6th place finisher Catalina Cruiser was sent off as the 9-5 favorite over 3-1 Whitmore, 5th in the Churchill Downs Stakes (G1), and 9-2 Strike Power, an allowance winner last out.

Jockey John Velazquez sent Strike Power to the front and he set fractions of 22.38 and 44.96 while pressed by 11-1 Recruiting Ready and stalked by Catalina Cruiser and 10-1 Stan the Man. Strike Power continued to lead through 3/4 in 1:08.50 but Catalina Cruiser came out 4 wide for room and rallied to win by 1/2 a length in a new stakes record 1:14.85, just 0.39 second off the track record. It was a nose back to Recruiting Ready third. 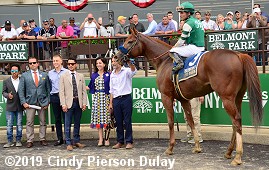 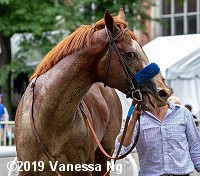 Left: Catalina Cruiser in the winner's circle. Winning owner Stephanie Hronis said, "He's been training really well and John [Sadler] has been really pleased with his workouts and he had enough confidence to send him out here and give him a run. The Breeders' Cup race was tough, but sometimes that happens when they just need a little break: rest and reset. That's where John Sadler is great. He's patient with the horses and he can back them up, shift the gears down a little bit, then build them back up again. This says a lot for [Catalina Cruiser] to travel and run as well as he did."

Right: Catalina Cruiser heads back to the barn after the race. Winning jockey Joel Rosario said, "He's a horse that wants to win. He wanted to win today. I was very confident in him. He's a nice horse. I just let him be where he wanted to be. He was always comfortable." 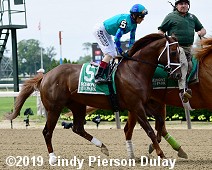 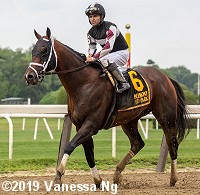 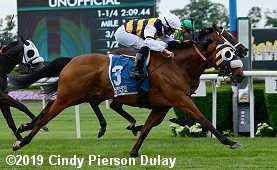 Closing out the Friday stakes action, the $400,000 Belmont Gold Cup Invitational (G2) featured a field of 8 older horses going 2 miles around 3 turns of the Widener turf. Breeders' Cup Turf (G1) 4th place finisher Arklow was sent off as the 2-1 favorite off his 2nd place finish in the Man O'War Stakes (G1). In to challenge him included 9-4 second choice Red Knight, 2nd in the Elkhorn (G2), and 7-2 third choice Canessar, 6th in the Elkhorn. 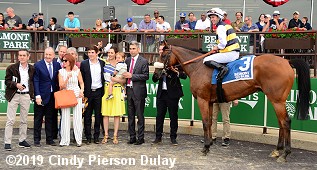 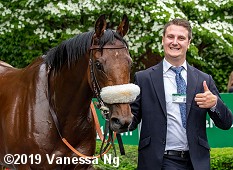 Left: Amade in the winner's circle. Winning trainer Alessandro Botti said, "I knew the distance would be no problem for him. He can gallop forever. He drifted out in the stretch because he got lost a little bit out there. That's usual for him. It's why he wears blinkers. He's been racing on the all-weather because in the winter in France the ground is really, really heavy and I didn't want to get my horse really tired. The horse will not stay here. This race was a prep for the Melbourne Cup. Today was a test. The only place you see fast fractions is at Ascot in the Gold Cup. He was comfortable in the Belmont Gold Cup. He was in his element today. This is his best race."

Right: Amade heads back to the barn after the race. Winning jockey Flavien Prat said, "We had a good trip all the way around there, just cruising, and he gave me a good kick turning for home. He responded well when [Arklow] came down the inside. He ducked out, but it seems like he likes to be on the outside by himself, so I let him do it. Alessandro told me that the 2 miles wouldn't be a problem and to be patient, and that he would give me a good kick." 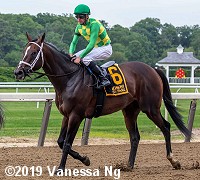 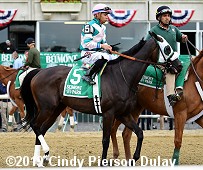 Left: Second place finisher and beaten favorite Arklow returns after the race. Jockey Florent Geroux said, "I got through on the inside, beautiful trip. But when I came in, the winner already had the momentum and he was very far outside and my horse never really saw him until late. When he saw him, it was like, 'okay I'm going,' but it was a little bit too late. He had no problems with the distance. He galloped out in front of everybody." 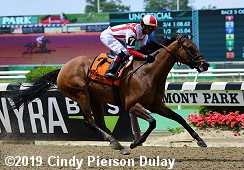 The first stakes race on Friday was the $250,000 Bed o'Roses Invitational (G3) for older fillies and mares sprinting 7 furlongs on the main track. Breeders' Cup Filly and Mare Sprint (G1) runner-up Chalon was the even-money favorite in the field of 6 over 3-1 Separationofpowers, 3rd in the Vagrancy Handicap (G3), and 4-1 Pacific Gale, second in the Vagrancy.

Jockey Jose Ortiz sent Separationofpowers to the lead through fractions of 22.49 and 45.04 while pressed by 23-1 Spring in the Wind and stalked by 8-1 Mybigitalianfriend and Pacific Gale. Entering the lane, Separationofpowers opened up a 4 length lead through 3/4 in 1:08.62. Chalon, 5th early under Javier Castellano, put in a strong late rally to no avail as Separationofpowers cruised to a 4 3/4 length win in 1:21.46. It was another 1 1/2 lengths back to 9-1 Dawn the Destroyer third. 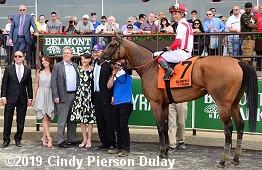 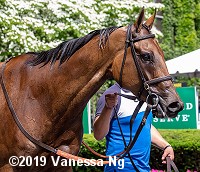 Left: Separationofpowers in the winner's circle. Winning trainer Chad Brown said, "She got a lot out of her last race and she really moved forward today. She also took advantage of a nice sharp break. Jose took control early and I think that proved to be a good decision today. She put herself up there, she broke so sharp and I was hoping she would. I said that if she broke cleanly and fast, [she should] go on with it and either go to the front, or at the very least establish herself prominent in second if someone was really hell-bent on making the lead."

Right: Separationofpowers heads back to the barn after the race. Winning jockey Jose Ortiz said, "She broke really well today. Last time she ran, she probably needed that race under her belt to make the difference today. I've ridden her for her entire career. She's a very gutsy filly and she has a lot of heart and that's what we're looking for in fillies." 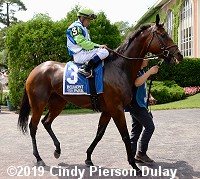 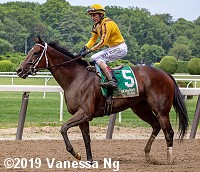 Right: Third place finisher Dawn the Destroyer returns after the race. The Kiaran McLaughlin trainee improved her record to 4 wins, 2 seconds, and 5 thirds in 17 starts, earning $316,405 for owner-breeder Stonestreet Stables. 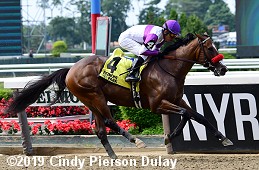 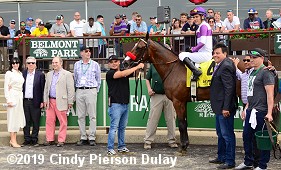 The $150,000 Tremont Stakes featured 7 two-year-olds sprinting 5 1/2 furlongs, with Santa Anita debut winner Fore Left sent off as the 8-5 favorite over 2-1 Memorable, a debut winner at Churchill Downs, and 5-1 Rookie Salsa, winner of the Kentucky Juvenile Stakes. Jockey Mario Gutierrez sent Fore Left to the lead and he set fractions of 22.58 and 45.77 while pressed by 58-1 longest shot Federale and stalked by Rookie Salsa. Entering the stretch, Fore Left opened up on the field, extending his advantage to 5 1/2 lengths through 5f in 57.85. 11-2 fourth choice Theitalianamerican put in a strong 6 wide rally from last to no avail, as Fore Left finished 4 1/2 lengths clear in 1:04.44. It was another 3 1/4 lengths back to Rookie Salsa third.

Winning owner Paul Reddam said, "When he broke on top, I thought he'd be tough. We hope that he can run 1 1/4 going forward, but you never know. We had Nyquist, who broke his maiden going 5f, and everyone said that horse can't go two turns or he can't go 1 1/8. [Fore Left] has the pedigree to go 1 1/4. Usually, with earlier speed you don't see that, but we hope he's the exception. We'll bring him back to California and decide where we'll go from there. It kind of depends on how the rest of the stable is doing also, but we would love to come back at Saratoga." Jockey Mario Gutierrez added, "He was sharp out of the gate and found the lead and was in really good contention. In the stretch, I just had to be a little firm. But he did it easy. He's composed. He seems promising, so hopefully, he keeps going the same way."