Kentucky Derby Day is the biggest card of racing at Churchill Downs. Before the main event, there were six graded stakes contested over the main track and turf course before the 150,729 fans who came out on Saturday. Earlier rainfall was insignificant leaving the main track fast and Matt Winn course firm during the earlier races with temperatures in the mid 60's, but the rains returned mid-card downgrading the main track back to sloppy in time for the Run for the Roses. 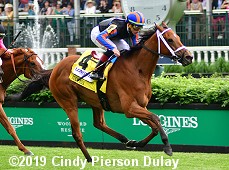 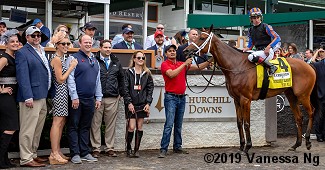 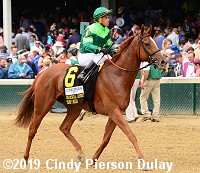 Left: Beau Recall in the winner's circle. Winning trainer Brad Cox said, "She got a class relief this winter at the Fair Grounds. It picked her head back and she has figured out how to win again. I think ultimately that's what got her going in the right direction again. She did move forward when she got up here after the Fairgrounds and she showed it today." Jockey Irad Ortiz Jr. added, "I had a perfect trip. She doesn't have too much speed so she was in the back and was relaxed. When I asked her to run, she was there for me. She was comfortable the whole way."

Right: Fifth place finisher and beaten favorite Precieuse returns after the race. The Chad Brown trainee has a record of 3 wins, 5 seconds, and 0 thirds in 10 starts, earning $496,594 for owner Peter Brant. 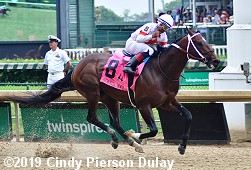 The $500,000 Churchill Downs Stakes (G1) featured a field of 11 older horses sprinting 7 furlongs on the main track. Count Fleet Sprint Handicap (G3) winner Mitole was sent off as the 2-1 favorite over 7-2 Whitmore, 2nd in the Breeders' Cup Sprint (G1), and 11-2 Promises Fulfilled, 4th in the Dubai Golden Shaheen (G1). Promises Fulfilled and 15-2 Bobby's Wicked One dueled out of the chute and down the backstretch through fractions of 22.38 and 44.71 while stalked by Mitole. Bobby's Wicked One led to midstretch through 3/4 in 1:08.69 but Ricardo Santana Jr. sent Mitole out for room and he powered by the pacesetters to win by 3 1/2 lengths in 1:21.21 over the fast track. It was another 1/2 length back to Promises Fulfilled third.
Results chart from DRF 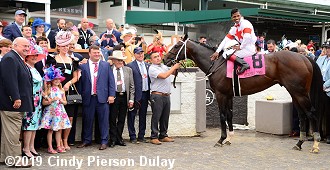 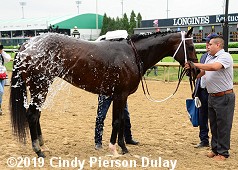 Left: Mitole in the winner's circle. Winning jockey Ricardo Santana Jr. said, "Steve has done a really amazing job with this horse. He's a really special horse for me. Today we knew there was a lot of speed in the race and it set up perfectly for him."

Right: Mitole gets splashed with ice water on his way back to the barn. Winning trainer Steve Asmussen said, "He's for real. Everyone has always been beaming about his potential and he met his potential today and is now a Grade 1 winner. The horse has been capable of what he's done before. But you see his attitude, the way he moves, you love to see it come together. Ricardo's confidence in the horse, the way he rode him, he didn't panic. He wasn't on his normal (spot on the) lead but he was comfortable. Quick back in three weeks off a very fast race, he's a quality horse. Like I said all week, the only thing I was worried about was not running him when he was doing this good. Yes, I think we all know what would be next off what he did today (the Met Mile). As long as he's telling us he was as ready as he was today, we will gladly be there." 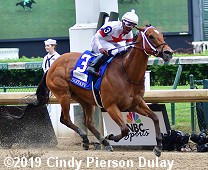 Kicking off the stakes action on Derby Saturday is the $500,000 Humana Distaff Stakes (G1), featuring older fillies and mares sprinting 7 furlongs on the main track. Beholder Mile (G1) runner-up Marley's Freedom was sent off as the 9-10 favorite in the field of 7 over 7-2 Spiced Perfection, winner of the Madison (G1), and 4-1 Amy's Challenge, 2nd in the Madison. Jockey Alex Canchari sent Amy's Challenge to the lead exiting the chute through fractions of 22.70 and 45.02 while pressed by 11-1 Mia Mischief and stalked by Spiced Perfection and 9-1 Talk Veuve to Me. Entering the lane, jockey Ricardo Santana Jr. sent Mia Mischief to lead through 3/4 in 1:08.24. Kept to task by Santana, Mia Mischief cruised to win by 1 3/4 lengths over late-running favorite Marley's Freedom in 1:21.78 over the fast track. It was another 4 lengths back to Amy's Challenge third.
Results chart from DRF 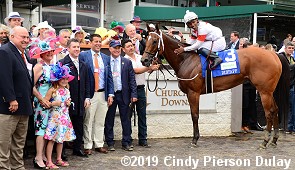 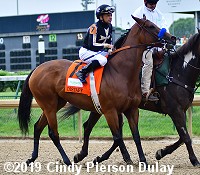 Left: Mia Mischief in the winner's circle. She won the Eight Belles Stakes (G2) one year ago today. Winning trainer Steve Asmussen said, "I think the filly looks great right now. She's doing really well and this was our first major target of the year with her. And she came through. It means so much (getting a Grade 1) with a filly who tries as hard as she does, as tough a race as she gave us last year. We felt really good about how she was coming into this race, how she was doing, knowing she's run so well over this racetrack. She was very sharp today and not enough can be said about how well Ricardo has done with her. She's a very headstrong, not easy filly and she's definitely listening to him right now and responding."

Right: Second place finisher and beaten favorite Marley's Freedom in the post parade. Trainer Bob Baffert said, "I was hoping she would be a little bit closer. When I saw the fractions, I thought she was a little bit too far back. I'm not sure if she struggles here or what. I was hoping to be near the pace within a length or two."  Jockey Mike Smith added, "It's not her favorite track. She doesn't get ahold of it very well. Maybe we were just wishful thinking today. Same track. Same mare. She ran well, but that's just because she's classy. She doesn't like it, though." 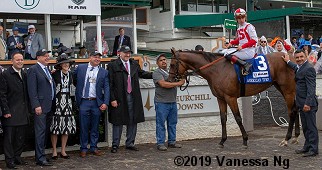 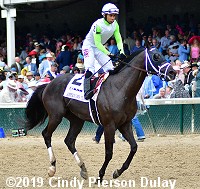 Left: Digital Age in the winner's circle. Winning trainer Chad Brown said, "He saved a lot of ground. He was stuck on the inside of the turf course, which is a double-edged sword. You want to save ground in these turf races, but clearly the outside of the turf course is a little bit better. I was just hoping Irad found good ground, and he did a good job of it. You've got to respect this horse, he knows where the wire is. He knows when to kick and he can get there in time. We bought him as a yearling at Newmarket. We just took our time getting him to the races. He had a few baby issues, but the owners were real patient. His time is now."

Right: Beaten favorite and 3rd place finisher Social Paranoia returns after the race. Jockey Manny Franco said, "I wanted to get outside, but I couldn't. There were just too many horses outside me all the way around. He still ran real good. He's a nice horse." Trainer Todd Pletcher added, "We wanted to get outside. It's soft down inside there. But he still had a good trip and a good run. The rider's good and he rode him well." 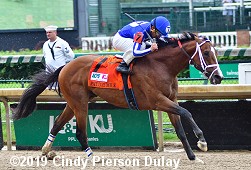 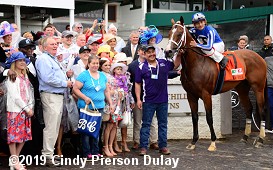 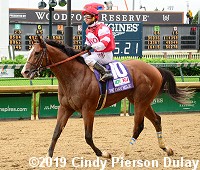 Left: Mr. Money in the winner's circle. Winning jockey Gabriel Saez said, "It was a good race for him. He was finally able to get it back together again. I couldn't have a better trip than that. Saving ground for later, I split horses turning for home and, man, the minute he was free, he explodes. He finished really well, and handled the track, and got the job done. He's been doing fabulous, day by day, week by week. He's been coming along, and I was just really happy with him today, and thought he would run a big race, and he did, he did."

Right: 8th place finisher and beaten favorite Instagrand returns after the race. The Jerry Hollendorfer trainee has a record of 2 wins, 0 seconds and 2 thirds in 5 starts, earning $304,000 for owner OXO Equine LLC. 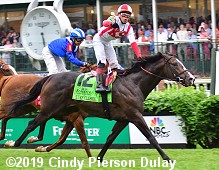 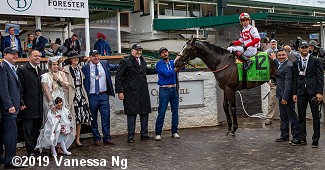 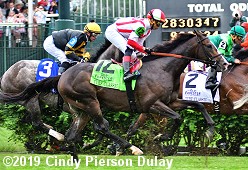 Left: Bricks and Mortar in the winner's circle. Winning trainer Chad Brown said, "He has a tremendous heart. I'm just so proud of him. He had to work for it today. He might not win by a lot, but he knows where the wire is. He's a super-talented colt. The Manhattan is next."

Right: Eventual winner Bricks and Mortar in 9th 4 lengths back first time by. 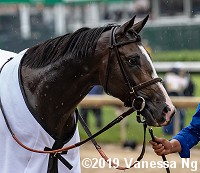 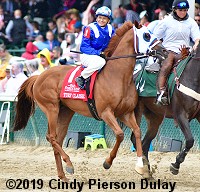 Left: Bricks and Mortar heads back to the barn. Winning jockey Irad Ortiz Jr. said, "It's a great day. I can't complain. Nice horses. He's a nice horse. He did everything right. He put himself in the game and took me all the way to the stretch and when I asked him he exploded. He's a horse when you ask him, he responds right away."

Right: Second place finisher Qurbaan in the post parade. Jockey Mike Smith said, “That was a heartbreaker. He ran so good; too good to lose. Those kind are hard to take.”