The $1.25 million Longines Kentucky Oaks (G1) at 1 1/8 miles is the premier race in the country for 3-year-old fillies, and is the female counterpart to the Kentucky Derby. A full field of 14 faced the starter in the 145th renewal of this 1 1/8 mile main track feature at Churchill Downs, run on Friday before 105,719 fans, under partly cloudy skies and a post time temperature of 74 degrees and extreme humidity, with the track officially rated "fast" after starting the card sloppy after morning rainfall. All-sources wagering on the Kentucky Oaks race rose 10% to $19.4 million from the previous Oaks race record total of $17.5 million in 2018. Track president Kevin Flanery said, “Our guests were able to benefit from the most recent improvements to the facility including the new Starting Gate Suites Rooftop Lounge that added approximately 500 new seats. We also made several improvements to dining areas inside the facility and replaced nearly 25,000 seats in our outdoor grandstand and clubhouse sections that enhanced the guest experience.  We look forward to tomorrow for what we know will be a memorable 145th running of the Kentucky Derby,”

As expected, Bellafina was sent off as the 9-5 favorite off her win in the Santa Anita Oaks (G1). In to challenge her included 4-1 second choice and Breeders' Cup Juvenile Fillies (G1) runner-up Restless Rider, 2nd in the Ashland (G1), and 6-1 third choice Jaywalk, Breeders' Cup Juvenile Fillies (G1) winner and Champion Two-Year-Old Filly, but 3rd in the Ashland.

Jockey Jose Ortiz sent 13-1 Serengeti Empress to the lead first time past the Spires and she set fractions of 23.25, 46.65, and 1:11.26 while pressed by 19-1 Motion Emotion and stalked by 11-1 Lady Apple. Also, soon after the start Jaywalk broke inward, clipping heels with 45-1 Positive Spirit causing Positive Spirit to clip heels and fall, unseating jockey Manny Franco. She and Franco walked off the track unhurt. On the far turn, jockey Channing Hill sent 38-1 Liora, 7th early, to challenge. However Serengeti Empress had plenty left, getting the mile in 1:36.70 and drawing off to win by 1 3/4 lengths in 1:50.17. It was a long 5 1/2 lengths back to Lady Apple third, while Bellafina put in a mild bid from 9th early to finish 5th beaten 8 lengths.

Following a stewards' inquiry into the start, Jaywalk was disquafied from 6th and placed 13th for causing the interference on Positive Spirit. 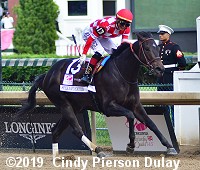 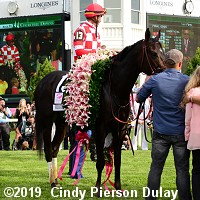 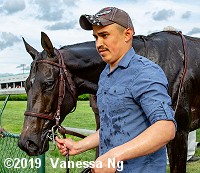 Left: Serengeti Empress in the winner's circle. Winning trainer Tom Amoss said, "How about that! I've never won a race this big. I've won a lot of races, but not one like this. I've heard it said that when it happens, it's just a different experience. Today, for me, it was just a rush of emotions. I thought about my mom and dad who are 93 and 94. They're at home watching. I know they saw this today. I can't wait to speak to them. My extended family. I have five brothers and their families. My wife and kids are here. Colleen, my wife, Ashley my oldest daughter and Hailey my youngest daughter. I think, as a team, us four have seen quite a bit as a trainer has. They put up with a lot. I thought about the people along the way."

Right: Serengeti Empress heads back to the barn. 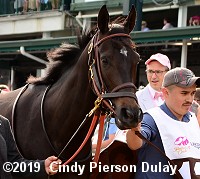 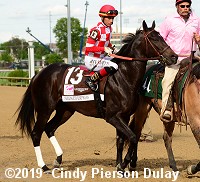 Left: Serengeti Empress walks over before the race.

Right: Serengeti Empress in the post parade. Winning jockey Jose Ortiz said, "Tom gave me a lot of confidence in her. I had never been on her, and he told me, 'Ride her like you own her.'  And that's what I did. I went out of there, I know her best races are in the lead, and I just tried to get her comfortable. I don't care if I was going a little bit too fast. As long as she was comfortable, I was comfortable with it.  She fought hard, she was ready." 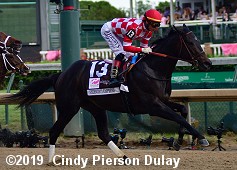 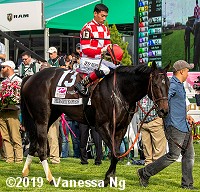 Right: Serengeti Empress circles after the race. Winning owner Joel Politi said, "She's an incredible athlete, and she showed it every day in the morning. And Tom and I have talked on the phone and texted to the point where we've got a direct line of communication.  And she told us that she was fine repetitively along the way. And if she wasn't, the both of us were very committed to not running.  And, again, every day she showed us that she was fine. And that last work ?? if you haven't watched the replay, it's on YouTube. It's an eye popper. You don't really need to watch the replay because you get to watch this one, but she gave us a lot of confidence." 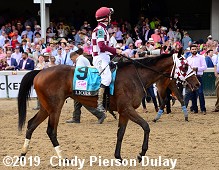 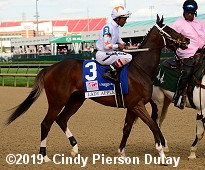 Left: Second place finisher Liora returns after the race. Trainer Wayne Catalano said, "We had a clear shot at her and I thought I was the winner. I was getting a little excited. You know what, this filly was training great. She looks great and everybody did a great job. Channing (Hill) did a really good job today. They let him get in behind and settle and I told him, maybe we'll come and pick up the pieces and everything he asked her to do, she did. She finished up strong. We just got outrun." Hill added, "Man, that was just heartbreaking. She ran so good. I thought we had it. That was an amazing race. Wayne had her so ready to run and we almost got there."

Right: Third place finisher Lady Apple in the post parade. Trainer Steve Asmussen said, "She ran hard. I'm very proud of her. Between her Fantasy win and her third in the Oaks, she's proved she's in the upper echelon of 3-year-old fillies. I still think she has some developing to do physically. She has a great future." Jockey Ricardo Santana Jr. added, "She ran a super race. I thought it may have been a little quick back but she's a very talented filly." 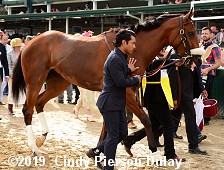 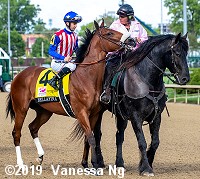 Left: Fifth place finisher and beaten favorite Bellafina walks over before the race. Trainer Simon Callaghan said, "I think that it was the distance that did her in today. I think she wants to run in one-turn races. We'll give her a break now and refocus on one-turn races. We may look at the Test (at Saratoga) next."

Right: Bellafina in the post parade with supersize pony Harley. Jockey Flavien Prat said, "She broke a little slow but she always does. In California, with a five-horse field, you are not that far back after (a slow) break. The break was not the issue. I thought I was in a good spot, but when it was time to fire, she just didn't." 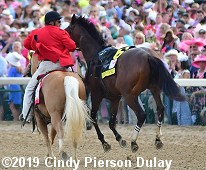 Left: Shortly after the start and you can see Positive Spirit and jockey Manuel Franco down behind the field. Franco said, "I clipped heels out of the gate. I'm OK."

Right: An outrider catches Positive Spirit in the clubhouse turn. She was not injured. Trainer Rodolphe Brisset said, "Manny's OK, the horse is OK, that's the important thing. She's back at the barn; they caught her real quick. We will come back another day."