The major California prep race for the Triple Crown is the $1 million Santa Anita Derby (G1) for 3-year-olds going 1 1/8 miles over the Santa Anita main track just 4 weeks before the Run for the Roses, and worth 100 points to the winner as part of the Kentucky Derby Championship Series. Conditions were excellent for the 30,7133 fans at the historic Arcadia oval, with sunny skies and temperatures in the low 70's. A field of just 6 went to post with Breeders' Cup Juvenile (G1) Game Winner sent off as the 1-2 favorite off his 2nd place finish in the Rebel (G2). In to challenge him included 3-1 second choice Roadster, last year's Del Mar Futurity (G1) third place finisher, and 13-4 third choice Instagrand, third in the Gotham (G3). 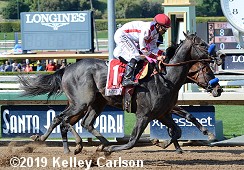 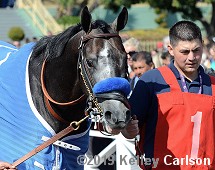 Left: Roadster in the winner's circle. Winning trainer Bob Baffert, who trains the first 2 finishers said, "Roadster is a light horse but always shown brilliance from day one. We're just lucky we were able to bring him back, because after Del Mar I was worried that maybe the (throat) surgery didn't go well, because it could've gone worse. But I couldn't thank the surgeon that did it enough. He's one of the best in the business and I've never had issues with it. His breathing is not an issue. Today he passed the test to know he's good enough to go to the Big Show. The fans, despite what they've reading, they showed up, they're here to watch good racing, they bring their family, they'll always remember the Santa Anita Derby. It was so comforting to see all these fans here and get behind us. They know at the end of the day we love our horses. We wake up worrying about them, we go to sleep worrying about them. To me, that's what made this a great day."

Right: Roadster in the paddock. Winning owner Peter Fluor said, "I thought he would've been closer to the lead frankly, but it was cool to see him run a different kind of race. He's been running second and then accelerating. Today, I'm proud of him for coming from off the pace like that. I wasn't too thrilled about things halfway through the race, but Mike said he's got gears and he showed it today. Hopefully, he comes out of it well and we can go on to the Derby. Mike did a good job keeping him relaxed and obviously he had to make a move at the top of the stretch and you're always waiting for a horse to make a move. He did just that, so happy ending. But, like I said, I thought we would've been closer up front. That was absolutely thrilling." 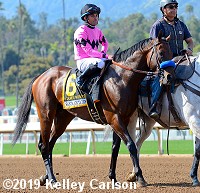 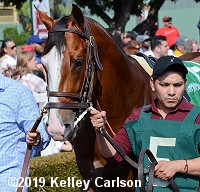 Left: Second place finisher and beaten favorite Game Winner in the post parade. Trainer Bob Baffert said, "They're two good horses. Game Winner was out there by himself and when he gets by himself, he needs company. It was a good, hard race for both of them, and coming in, that's what you want to see. This track is deep and slow, but it's safe, and that's what we wanted. I couldn't be happier. Game Winner is a fighter. It was a great stretch run, at the eighth pole I knew I was going to win, I just didn't know which one, but it was exciting. They'll both like a mile and a quarter. I think Game Winner's next race will be better. I've been bringing him along really easy.

Right: Third place finisher Instagrand in the paddock. Jockey Flavien Prat said, "I though he ran very well. At the quarter pole, I thought maybe I was done, but he switched leads and made a good run." 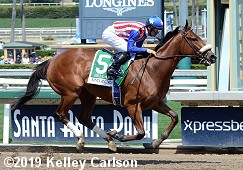 Jockey Mike Smith sent Chasing Yesterday to the lead first time by and she set fractions of 24.10 and 47.88 while pressed by Bellafina and stalked by Flor de la Mar. On the far turn Flor de la Mar gained the front through 3/4 in 1:12.51, but jockey Flavien Prat moved Bellafina 4 wide for room and she swept to the front through 1 mile in 1:38.43. Kept to task by Prat, Bellafina drew off late to win by 5 1/4 lengths over Flor de la Mar in 1:45.47. It was another 3 1/2 lengths back to Chasing Yesterday third, and 19 more to Slewgoodtobetrue last. 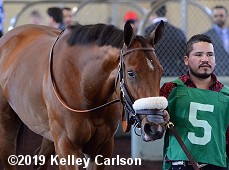 Left: Bellafina in the winner's circle. Winning trainer Simon Callaghan said, "It worked out perfectly, she relaxed great, did exactly what Flavien wanted, and she was there when he wanted her, so it worked out as we hoped. (Noted she was wide into the first turn): We weren't sure what the tactics were going to be on the inside of us and we didn't want to commit to going to the lead because then we could be pressured. We figured staying out wide made sense."

Right: Bellafina in the paddock. Winning jockey Flavien Prat said, "We were a little wide on the first turn.  I didn't want to get in any trouble, so I got her to be comfortable and relax.  At the 3/8ths pole, she ducked out a little and the others got away from us. We regrouped and when we made our move and got the lead, I was quite confident. I'm looking forward to the Kentucky Oaks. I'm confident that she will run better than she did in the Breeders. Cup." 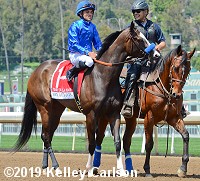 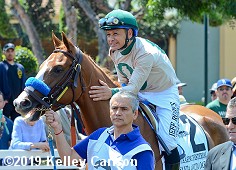 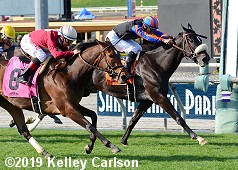 Jockey Edwin Maldonado sent 81-1 longest shot Killarney Lass to the lead first time by and she set fractions of 22.99 and 47.06 while stalked by Colonial Creed and stalked by 82-1 longest shot Ladymidtown. On the far turn Killarney Lass tired as Colonial Creed gained the front through 3/4 in 1:10.78. Colonial Creed continued to lead to midstretch through 1 mile in 1:35.23. 25-1 Hostess, 8th early under Drayden Van Dyke, rallied 3 wide and outfinished Maxim Rate for the nose victory in 1:47.09. It was anotehr nose back to late-running favorite Lady Prancealot in third to complete the 3-horse blanket finish. 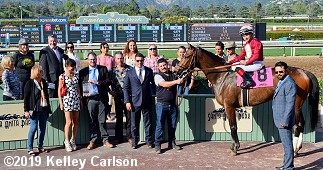 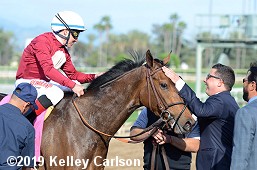 Left: Hostess in the winner's circle. Winning jockey Drayden Van Dyke said, "I gave her a few taps on the shoulder and she jumped into the bridle. I had to make a decision to go inside or go outside. It was a split [second] decision. I can never do anything wrong with this filly. No matter what I do, she covers me. She is definitely something special."

Right: Hostess gets a pat after the race. 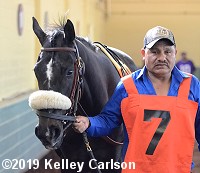 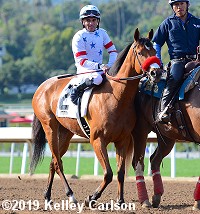 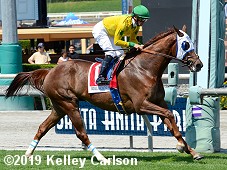 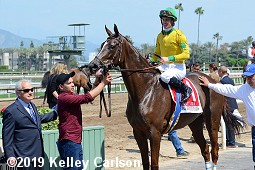 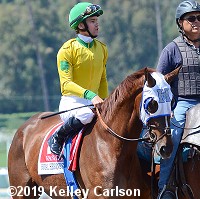 Left: Vasilika in the winner's circle. Winning trainer Jerry Hollendorfer said, "I talked to Flavien (Prat) a little bit before the race and I told him if 'You wanted to do something a little different, I didn't mind.' I think he was a little nervous about being back today, so he kept her a little closer and it worked anyway. She's doing good right now, that's for sure."

Right: Vasilika in the post parade. Winning jockey Flavien Prat said, "We broke fine at the rail. We changed our strategy when I saw Mike (Smith) was out of the race on the first turn and we went to plan B. I can never do anything wrong with this filly. No matter what I do, she covers me. She is definitely something special." 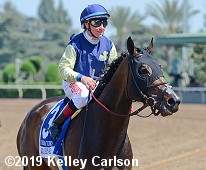 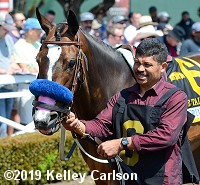 Left: Second place finisher Meal Ticket returns after the race. Jockey Drayden Van Dyke said, "My plan was to follow the speed and when two took the first turn the way she did, it kind of forced me to change it up a bit. But, I was still pretty much where I wanted to be. I almost got myself in a good position where I could trap Vasilika, but she just proved to have too much horse to keep her bottled up down in there. My filly ran a really good race, so I'm pretty happy."

Right: Third place finisher Space Talk in the paddock before the race.

On to the Santa Anita Hanidicap, Evening Jewel, and Echo Eddie Stakes