Due to the race being oversubscribed with 19 horses making final entry, the originally $1 million Rebel Stakes (G2) at Oaklawn, contested at 1 1/16 miles at Oaklawn, was split into two 2 division, each with a $750,000 purse and worth 37.5 points to the winner as part of the Kentucky Derby Championship Series. A record Rebel Day attendance of 45,500 fans packed the historic Hot Springs oval under sunny skies and temperatures in the low 60's, with the track rated fast.

In the first division of the Rebel Stakes, 7 of the originally drawn 9 horses went to post with Los Alamitos CashCall Futurity (G1) winner Improbable sent off as the 2-5 favorite. In to challenge him included 7-2 second choice Galilean, winner of the California Cup Derby, and 8-1 third choice Long Range Toddy, 3rd in the Southwest (G3). 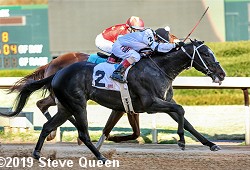 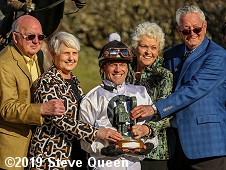 Left: Long Range Toddy in the winner's circle. Winning trainer Steve Asmussen said, "The horse is doing extremely well. He stepped up. Jon gave him a beautiful trip today and I love how he earned it late. The horse is extremely kind. Jon worked him the other day and his comment was that he was push button. The horse was away well and got a good spot. They went about their business and he relaxed down the backstretch. You could tell coming into the stretch he was loaded. He waited until they all lined out, didn't waste any ground and wheeled him out late like he should and got rewarded for it."

Right: Trophy presentation for the first division of the Rebel Stakes. 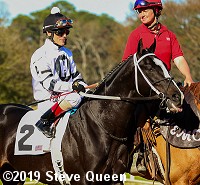 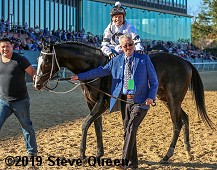 Right: Owner Willis Horton leads Long Range Toddy to the winner's circle. Winning jockey Jon Court said, "I was able to get settled and hoped I had left enough for a big punch. I also hoped I hadn't let him get too far in front. Believe me, I was sweating bullets, but I had a lot of confidence in him. I had watched his races and I had worked him before the race. It's great when a plan comes together as well as this one did." 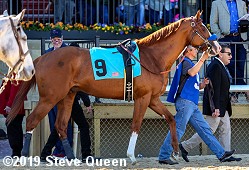 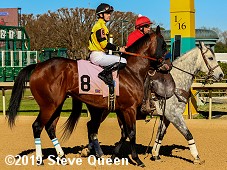 Left: Second place finisher and beaten favorite Improbable walks over before the race. Trainer Bob Baffert said, "I'm just thankful I got to run them. They ran their races." Improbable will go next in the Arkansas Derby.

Right: Third place finisher Galilean in the post parade. Trainer Jerry Hollendorfer said, "We thought it was a good race (before seeing the replay). I think we got away a little bit slow. I don't know what happened there in the middle of the race. Trying to figure that out."

The post parade for the first division of the Rebel Stakes.

In the second division of the Rebel Stakes, run an hour later, all 10 entrants went to post with undefeated Breeders' Cup Juvenile (G1) winner Game Winner sent off as the 1-2 favorite. In to challenge him included 9-2 second choice Omaha Beach, an allowance winner at 5th asking last out, and 9-1 third choice Laughing Fox, winner of 2 straight allowance contests.

Jockey John Velazquez sent 48-1 Market King to the lead first time by through an opening quarter of 23.54 before Omaha Beach took over on the clubhouse turn through a half in 47.29 and 3/4 in 1:11.82. Omaha Beach with Mike Smith aboard opened up a 2 length lead midstretch through 1 mile in 1:36.39. Game Winner, 6th early under Joel Rosario, put in a strong 4 wide rally but Omaha Beach held him off by a nose in 1:42.42. It was a long 8 1/4 lengths back to Market King third. 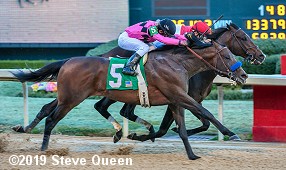 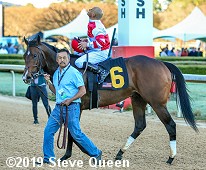 Left: Omaha Beach in the winner's circle. Winning trainer Richard Mandella said, "I thought I got nosed out! Coming out of a maiden race, it's a big step up. Game Winner ran really good. He hadn't run in a long time. He'll probably be tough next time, but mine just broke his maiden. He might be tougher, too. We always thought he was a really good horse. Being a War Front, I thought maybe he was going to want turf. But I was wrong with that. He wants dirt."

Right: Jockey Mike Smith celebrates aboard Omaha Beach after the race. Mandella said Omaha Beach will fly back to California on Tuesday. “We’ll just have to play it by ear.” 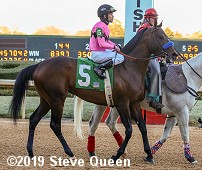 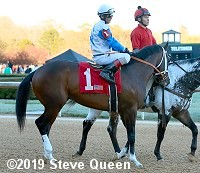 Left: Second place finisher and beaten favorite Game Winner in the post parade. Jockey Joel Rosario said, "He ran a tremendous race. He fought really hard. I couldn't get by the horse on the lead." Trainer Bob Baffert added, "I would have liked to have won, but I'm very happy with both horses. They both ran well off the layoff. Thank goodness for the Cella family. We got to run both horses today. It was great racing." Game Winner will go next in the Santa Anita Derby.

Right: Third place finisher Market King in the post parade. Trainer D. Wayne Lukas said, "I was real pleased. I think we're still in the learning process. I think he's still a little bit heavy. I'm trying to tighten him down and everything, but this is a step in the right direction. I was really pleased with the ride." 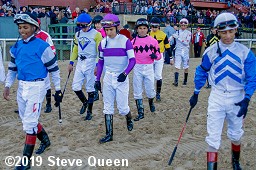 Left: The jockeys walk over to the infield saddling area before the race.

Right: The post parade for the second division of the Rebel Stakes.

Immediately before the first Rebel division, a field of 5 older fillies and mares went 1 1/16 miles in the $350,000 Azeri Stakes (G2), the major local prep for the Apple Blossom Handicap. Last year's Delaware Handicap (G2) winner and Personal Ensign (G1) runner-up Elate was sent off as the even-money favorite over 6-5 second choice Midnight Bisou, third in the Breeders' Cup Distaff (G1) before winning the Houston Ladies Classic (G3), and 8-1 third choice Shamrock Rose, winner of the Breeders' Cup Filly and Mare Sprint (G1) before finishing 4th in the Hurricane Bertie (G3). 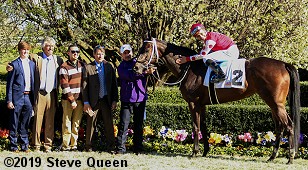 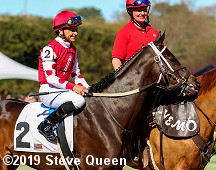 Left: Midnight Bisou in the winner's circle. Winning trainer Steve Asmussen said, "It's all Midnight Bisou. She's a very special mare. She's been training incredibly well all winter. Scott (Blasi) has had her in New Orleans and Angel (Garcia) has been getting on her. She's been spot on and looked beautiful. I thought she proved her quality today. Today's Azeri had four Grade 1 winners in it and for her to come out on top is very special. I'll have to talk to (owner) Jeff (Bloom) and see how she comes out of the race, but (Apple Blossom Handicap) would be the plan."

Right: Midnight Bisou in the post parade. Winning jockey Mike Smith said, "She was loaded. I basically placed her and she the rest. She's doing really well today." 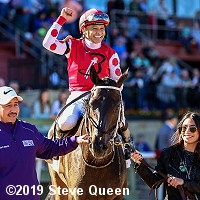 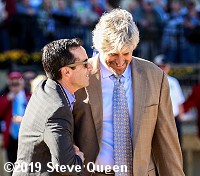 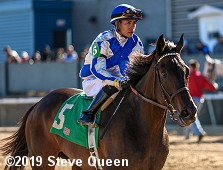 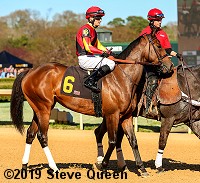 Left: Second place finisher and beaten favorite Elate returns after the race. Trainer Bill Mott said, "She ran very well. She was coming a layoff of over 200 days."

Run between the Rebel divisions was the $350,000 Essex Handicap for older horses going 1 1/16 miles as a prep for the Oaklawn Handicap. Breeders' Cup Dirt Mile (G1) 5th place finisher and San Pasqual (G2) third place finisher Giant Expectations was sent off as the 8-5 favorite in the field of 9 over 7-2 Heavy Roller, winner of 2 straight allowances, and 5-1 Hence, 4th in the Jeff Hawn Memorial at Remington after finishing 5th in the Clark Handicap (G2).

Left: Rated R Superstar in the winner's circle. Winning trainer Cipriano Contreras said, "He's just a good old horse. He made a half a million dollars before I got him. He's a nice old horse. He still has something left in the tank, hopefully, a little better than this." He will go next in the Oaklawn Handicap.

Right: Third place finisher and beaten favorite Giant Expectations in the post parade. Trainer Peter Eurton said, "Gets away a little bad. I don't know if it cost him too much. Went a little wide. Getting over this track, they say it's a funny track if you're not training on it a little, too." 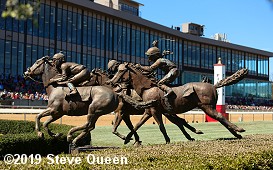 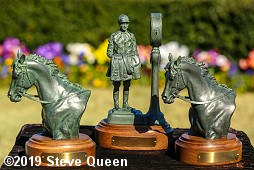 Left: Looking back at the grandstand over the statue behind the winner's circle.

Right: The trophies for the Azeri, Rebel and Essex.