The traditional feature at Oaklawn Park on Presidents' Day Monday is the $500,000 Southwest Stakes (G3), a major prep for the Arkansas Derby (G1) and ultimately the Triple Crown, and worth 10 points to the winner as part of the Road to the Kentucky Derby. Conditions were typical for winter, with cloudy skies and temperatures in the low 40's for the 19,500 fans on hand.

A field of 11 three-year-olds contested this 1 1/16 mile trip around the historic Hot Springs oval, with Cutting Humor sent off as the 2-1 favorite off a second place finish in an allowance at Gulfstream. In to challenge him included 4-1 second choice Grey Attempt, winner of both the Sugar Bowl at Fair Grounds and the Smarty Jones at Oaklawn, and 5-1 third choice Jersey Agenda, winner of 2 straight allowances.

Jersey Agenda and Gray Attempt dueled for the lead through fractions of 23.43, 47.63, and 1:12.73 while stalked by 13-1 Olympic Runner, 8-1 Long Range Toddy, and 7-1 Sueno. Entering the stretch, Grey Attempt and Jersey Attempt both tired. Jockey Terry Thompson sent 62-1 Super Steed, 9th early, 5 wide to take over, opening up a 3 length lead midstretch through 1 mile in 1:37.64. Sueno put in a strong late rally but Super Steed held him off by 3/4 length in 1:44.05 over the fast main track. It was another 1 1/4 lengths back to Long Range Toddy third, while Cutting Humor trailed early, attempted to rally on the turn, but came up empty to check in 7th. 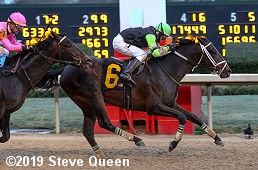 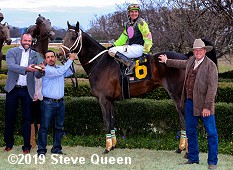 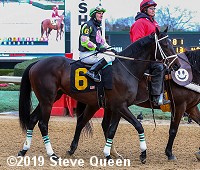 Left: Super Steed in the winner's circle. Winning trainer Larry Jones said, "He's a nice horse. He got sick going into the Fair Grounds race (Sugar Bowl). It wasn't serious, but you could tell he didn't feel well. And, in the Smarty Jones they ran a Merry Go Round race. Terry did a good job. He had him in a good spot. This is very good. It's been a while since Terry and I have been in this position. This is wonderful."

Right: Super Steed in the post parade. Winning jockey Terry Thompson said, "He ran just a beautiful race. He wasn't as aggressive. The other day (in the Smarty Jones), he got shuffled back, but he was aggressive. Today everything was in flow. It worked out perfect. Larry said wherever we were, make sure he gets the lead heading into stretch. He has a big heart." 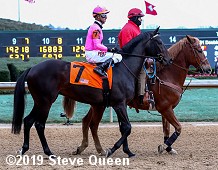 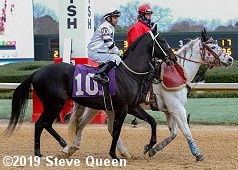 Left: Second place finisher Sueno heads out for the post parade. Trainer Keith Desormeaux said, "Great race. It would have nice to get through earlier. This horse is as legit as they come. We are very thankful to have him in our stable." 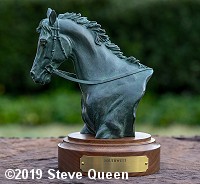 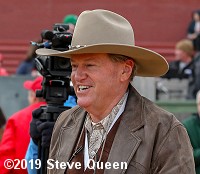 Left: The trophy for the Southwest Stakes

Right: Trainer Larry Jones waits for Super Steed to return after winning the race. Jones added, "We kind of got shuffled around a bit, but needless to say, we were in a better spot than some of them. He made a big move on the far turn. He got started late. He doesn’t have a world of experience. I want to run him about once a month. The way they have the series set up here is perfect. That’s what we came for. The Rebel would be the next spot we would be targeting, if all goes well. It looks like everything this morning is well."

Immediately before the Southwest, a full field of 14 older horses went to post in the $500,000 Razorback Handicap (G3) also at 1 1/16 miles. Coal Front was sent off as the 6-5 favorite off his win in the Mr. Prospector (G3) at Gulfstream. In to challenge him included 5-1 second choice Copper Bullet, 11th in the Malibu (G1) at Santa Anita, and 6-1 third choice Souper Tapit, winner of the Sunshine Millions Classic at Gulfstream.

Jockey Tyler Baze sent 15-1 All Out Blitz to the lead first time by and he set fractions of 22.78, 46.59, and 1:11.84 while pressed by Coal Front and stalked by Copper Bullet. Entering the stretch, All Out Blitz tired as Coal Front inherited the lead through 1 mile in 1:37.18. Copper Bullet attempted to rally 3 wide through the lane but Coal Front under John Velazquez held him off by a neck in 1:43.45. It was another 1 1/4 lengths back to 80-1 Rated R Superstar third. 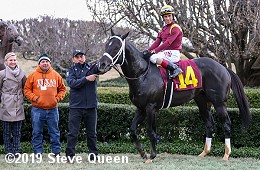 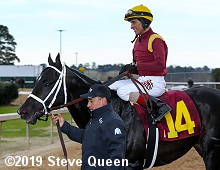 Left: Coal Front in the winner's circle. Winning trainer Todd Pletcher said, "We were a little concerned when we saw the post, but the real key to his success today was getting away cleanly and getting a good position going into the first turn. Had to go a little quick to get to the first turn, but turning up the backside he relaxed nicely."

Right: Coal Front returns after the race. Winning jockey John Velazquez said, "He broke sharp and then I was able to give him a little break to get him off somebody. It worked out perfect." 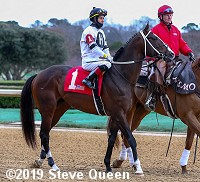 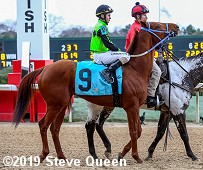 Left: Second place finisher Copper Bullet heads out for the post parade. Jockey Jose Ortiz said, "Perfect trip. I followed Johnny (Velazquez). I thought they were going a little fast early. Down the backside, they were going plenty fast. That horse that pulled out the win is very impressive."

Right: Third place finisher Rated R Superstar in the post parade. Jockey David Cabrera said, "When I turned for home, I thought I was the winner. I tried to shoot for a hole and he just kind of got intimidated. If he wouldn't have gotten intimidated, I think we would have gotten it."

Shortly after the start of the Razorback Handicap. 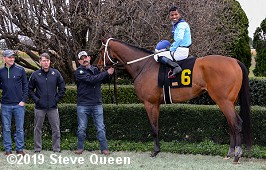 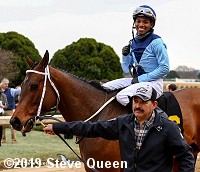 Left: She's a Julie in the winner's circle. Winning jockey Ricardo Santana Jr. said, "She ran a good race. That filly, she's always loyal, always tries hard, always tries her best. She took a little time off and came back fresh, and won a big race."

Right: She's a Julie returns after the race. Trainer Steve Asmussen said, "A very special filly," noting she was named after his wife. 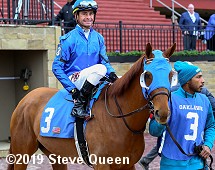 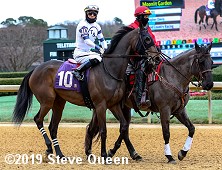 Left: Second place finisher Promise of Spring heads out for the post parade. Jockey Corey Lanerie said, "It was perfect (trip). I found myself sitting right behind the two favorites and was trying to go and went we after them, but it wasn't good enough today to win. She ran a tremendous race."

Right: Third place finisher Moonlit Garden in the post parade. Jockey Jose Ortiz said, "Perfect (trip). She broke good. Put me there good. I sat a half a length behind them. Maybe half a mile, I started making my move, but She's a Julie is a really nice filly, Grade 1 placed. She proved it again today."

The horses break from the gate for the Bayakoa Stakes. 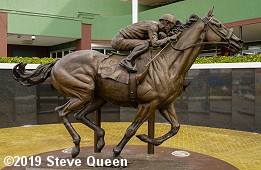 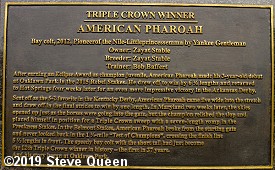 The American Pharoah statue and plaque at Oaklawn. He kicked off his 2015 Triple Crown sweep by winning the Rebel Stakes and the Arkansas Derby at Oaklawn.