On Saturday, a field of 7 three-year-olds went 1 1/16 miles in the $750,000 Rebel Stakes (G2) at Oaklawn Park, the major local prep for the Arkansas Derby and worth 50 points to the winner in the "Kentucky Derby Championship Series". 30,000 fans packed the historic Hot Springs oval braving intermittent rain and temperatures in the mid 60's. American Pharoah was sent off as the 2-5 favorite, despite being unraced since the FrontRunner (G1) at Santa Anita before being scratched out of the Breeders' Cup Juvenile (G1). In to challenge him included 5-1 second choice Madefromlucky winner of two straight allowance events, and 11-2 third choice The Truth Or Else, second in the Southwest (G3) last out after 6th in the Remsen (G2).

Jockey Victor Espinoza sent American Pharoah to the lead first time by and he set fractions of 24.41, 49.63, and 1:15.22 over the sloppy, sealed track while stalked by 38-1 Paid Amission and Madefromlucky. Entering the lane, American Pharoah began to draw away from the field, getting 1 mile in 1:39.76. Under a hand ride by Espinoza, American Pharoah cruised past the post 6 1/4 lengths ahead of Madefromlucky in 1:45.78. It was another 2 1/2 lengths back to 8-1 Bold Conquest third. 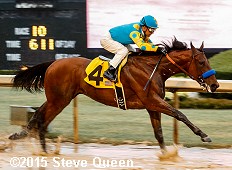 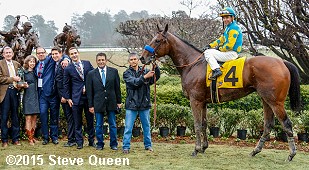 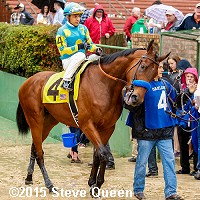 Left: American Pharoah in the winner's circle. Winning trainer Bob Baffert, who has won 5 of the last 6 Rebels, said, "You always hope that he's as good as he's been showing us in the mornings and he was today. His right front shoe wasn't on right, and when he can run like that all the way around with it like that, it shows you how good he is. This was the perfect kind of race on the comeback, and it's pretty exciting."

Right: American Pharoah heads out for the post parade. Jockey Victor Espinoza said, "He was very impressive. He's an amazing horse. The first time I rode him, Bob said he's the real deal. Bob's a Hall of Famer, so he knows. Bob was confident, so that made me confident. He is a tremendous horse. He has a lot of talent and he loves to run. This is an amazing horse." 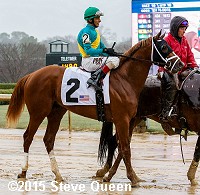 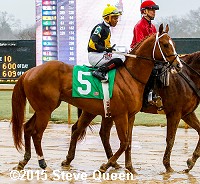 Left: Second place finisher Madefromlucky in the post parade. The 5-1 second choice stalked the pace in third 1 1/2 lengths back under John Velazquez, but was no match late beaten 6 lengths. The Todd Pletcher trainee improved his record to 2 wins, 2 seconds, and 1 third in 6 starts, earning $208,700 for owners Cheyenne Stables and Mac Nichol.

Right: Third place finisher Bold Conquest in the post parade. The 8-1 shot raced 4th about 2 lengths off the pace nder Ricardo Santana Jr. but came up empty in the stretch, beaten 8 3/4 lengths. The Steve Asmussen trainee improved his record to 1 wins, 2 seconds, and 2 thirds in 6 starts, earning $228,576 for owner Ackerley Brothers Farm. 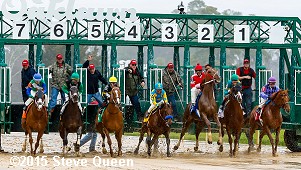 The horses break from the gate in the Rebel with eventual winner American Pharoah (4) bobbling at the break. Winning owner-breeder Ahmed Zayat added, "He showed us he can relax and enjoy very, very hard, hard circumstances. This is not ideal. The race on paper was for him to lose. He's a legitimate 1-5 like the bettors made him, but it's different when you're on the track. He hadn't run since September."

The $250,000 Razorback Handicap (G3) features older horses going 1 1/16 miles as the major local prep for the Oaklawn Handicap. Race Day was sent off as the 2-1 choice in the field of 6 off his third place finish in the Fred Hooper (G3) at Gulfstream. In to challenge him included 5-2 Tapiture, second in both the Pennsylvania Derby (G2) and Breeders' Cup Dirt Mile (G1), and 3-1 Carve, winner of the Fifth Season last out. 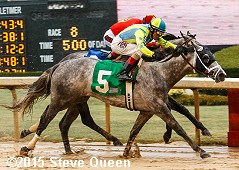 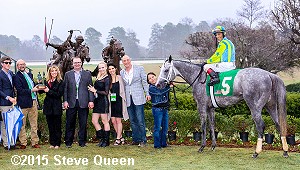 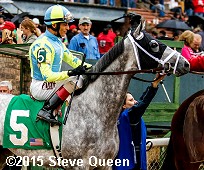 Left: Race Day in the winner's circle. Winning jockey John Velazquez said, "There was a lot of pace in his last race at Gulfstream and he didn't get a good break. Today, he broke well. I loved the way he was running into the first turn. When he came down the lane, he put up a good fight."

Right: Race Day heads out for the post parade. Winning owner Matt Schera said, "We all flew down, a bunch of friends came. We felt we had a good shot. The last race, he had a little bit of traffic problems, and we know he is a good horse." 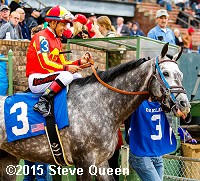 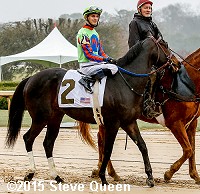 Left: Second place finisher Midnight Hawk returns after the race. Jim Barnes, assistant to trainer Bob Baffert said, "He ran huge, and he ran straight, which makes us really happy because in a lot of his past races he's been very erratic. We could not be happier with him and how well he did today."

Right: Third place finisher Golden Ticket in the post parade. The 19-1 longest shot was last 10 lengths off the pace under Chris Landeros, then rallied through traffic to get third beaten 7 1/4 lengths. The Ken McPeek trainee improved his record to 6 wins, 8 seconds, and 4 thirds in 31 starts, earning $1,358,090 for owner Magic City Thoroughbred Partners. 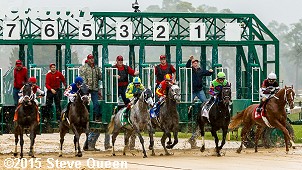 The start of the Razorback Handicap.

Kicking off the stakes trio on Saturday, a field of 5 older fillies and mares went 1 1/16 miles in the $300,000 Azeri Stakes (G2), the major local prep for the Apple Blossom Handicap. Cotillion Handicap (G1) and Breeders' Cup Distaff (G1) winner Untapable, last year's champion 3-year-old filly, was sent off as the 1-10 favorite. In to challenge her included 6-1 second choice Mufajaah, winner of the Pippin and the Bayakoa (G3), and 8-1 Gold Medal Dancer, third in the Bayakoa. 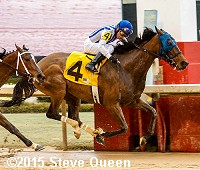 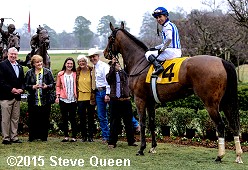 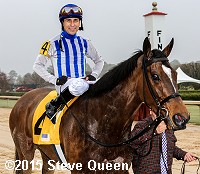 Left: Gold Medal Dancer in the winner's circle. Winning trainer Donnie Von Hemel said, "It's very exciting and the mare just ran a huge race. Thanks to Pin Oak (Stud) and my entire staff. It was a team effort and I am thrilled to death. We had a chance to go out and control the pace and Luis did a great job. She fought off the champion and she showed a lot of heart. The big mare came through and got her nose down on the wire. It's sure a possibility that we'll be back for the Apple Blossom." 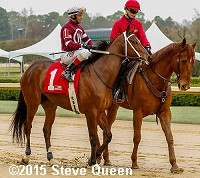 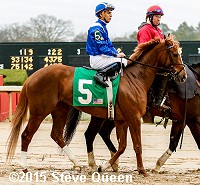 Left: Second place finisher and beaten favorite Untapable in the post parade. Trainer Steve Asmussen said, "The track was a little heavy and obviously it was a bit of a concern off the layoff. The main thing is that she comes out of it well. There's a lot of reasons for her to move forward off this race. It was a concern not being able to get her up here and have a work over the track, but the weather didn't allow for that. As long as she comes out ok, we'll be happy with this effort."

Right: Third place finisher Mufajaah in the post parade. The 6-1 shot was last 7 lengths off the pace under Emmanual Esquivel then rallied to get third beaten 3 lengths. The Dan Peitz trainee improved her record to 5 wins, 0 seconds, and 2 thirds in 13 starts, earning $267,140 for owner Shadwell Stable.