The long Santa Anita winter-spring meet usually begins on December 26th, however, due to heavy rains that day, opening day was delayed to Saturday. The traditional opening day feature is the $300,000 Malibu Stakes (G1) for three-year-old sprinters going 7 furlongs. The race kicks off the Strub Series for newly-turning 4-year-olds, continuing with the San Fernando and the Strub Stakes during the meet. Conditions were excellent in Arcadia, California, with the 35,085 fans in attendance enjoying sunny skies and temperatures in the low 60's. The main track dried to fast in time but the turf course remained "good". As expected Breeders' Cup Dirt Mile (G1) runner-up Omaha Beach was sent off as the 2-5 favorite in the field of 5. In to challenge him included 5-2 second choice Complexity, 11th in the Woody Stephens (G1) in June, and 9-1 third choice Roadster, 4th in the Native Diver (G3).

Jockey Joe Talamo sent 21-l longest shot Much Better to a clear lead out of the chute through fractions of 22.43 and 45.02 while pressed by Complexity and stalked by Omaha Beach. Turning for home Much Better tired badly as Omaha Beach took over through 3/4 in 1:09.55. Kept to task by Mike Smith, Omaha Beach drew off to win by 2 3/4 lengths over late-running Roadster in 1:22.33. It was another 2 1/4 lengths back to 20-1 fourth choice Manny Wah third. 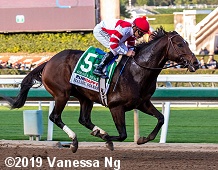 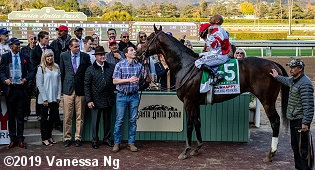 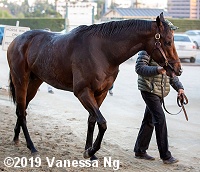 Left: Omaha Beach in the winner's circle. Winning trainer Richard Mandella said, "He was supposed to run like this. "He's like a son; he's better than a son. He makes me money; he doesn't cost money. I thought about it a lot and I should have spoken to Mr. Porter when he was a two year old and suggest castrating him, and I still haven't. He's a great horse. This is really special for us, Opening Day at Santa Anita, after all the trouble we have been through this year, this place is The Great Race Place and we all need to remember that." He will start next in the Pegasus World Cup.

Right: Omaha Beach heads back to the barn. 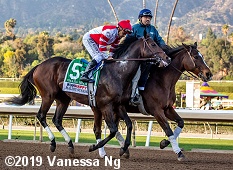 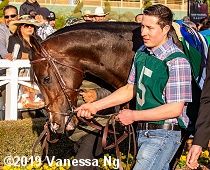 Left: Omaha Beach in the paddock before the race.

Right: Omaha Beach in the post parade. Winning jockey Mike Smith, who set a new record of career Grade 1 wins by a jockey with 217, said, "It's 217? Wow. You shocked me right there to be honest with you. You're blessed to win one in this sport; 217, man I can't even tell you. Jerry (Bailey, previous record holder) is someone that comes from my hometown. I was born in New Mexico but raised in Texas in El Paso where he's from. His father was my dentist. He's always meant a lot to me, so to surpass him means a whole lot. It's been an amazing career looking back on it. It's too bad we don't look back on things every day in situations like this to appreciate what you've been able to accomplish. Passing Jerry Bailey at anything is pretty amazing." 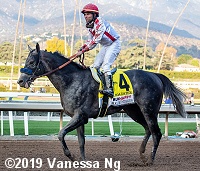 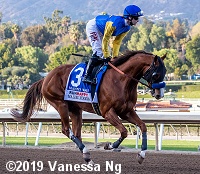 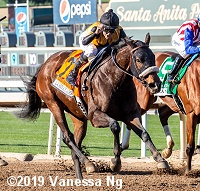 The distaff counterpart to the Malibu is the $300,000 La Brea Stakes (G1) for 3-year-old fillies also sprinting 7 furlongs. Breeders' Cup Filly and Mare Sprint runner-up Bellafina was sent off as the 3-5 favorite in the field of 9 over 11-2 Bell's the One, winner of the Raven Run (G2), and 6-1 Mother Mother, unraced since 6th in the Eight Belles (G2) in May.

Jockey Victor Espinoza sent Bellafina to the lead exiting the chute through fractions of 21.70 and 44.41 while pressed by Mother Mother and stalked by 53-1 Free Cover. Entering the lane Bellafina continued to lead through 3/4 in 1:09.31 bnut 12-1 Hard Not to Love, last early under Mike Smith, came out 4 wide for room and rallied to win going away by 2 1/4 lengths in 1:22.17. It was another length back to Mother Mother third. 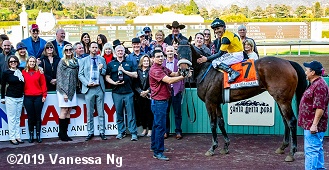 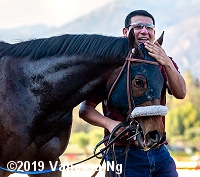 Left: Hard Not to Love in the winner's circle. Winning trainer John Shirreffs said, "Yes, she was really a handful going to the gate. She only has the one eye (her right), and when she gets nervous, she tends to spin around to see. This was a great race to win. For a filly to win a Grade I, that's like a PhD, so it makes it especially fulfilling. Mike has really made a difference with her. When he made the decision to ride her, he put his reputation as a horseman on the line. I think that made this even more special."

Right: Hard Not to Love heads back to the barn after the race. Winning jockey Mike Smith said, "My hat's off to West Point Thoroughbreds, John Shirreffs and the whole barn, so many people. They work so hard with this mare. She has one eye (her right) so she gets a little bit of anxiety at times. We work hard with her and it's great to see the hard work that we put in pay off today. The horse (is what he loves about racing). After the horse it's the wonderful people you meet. But the horse brings us all together." The win tied Jerry Bailey's record of 216 Grade 1 wins, which he broke later in the card in the Malibu. 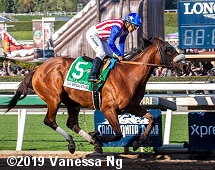 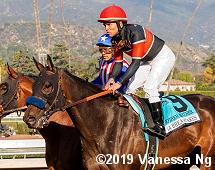 Left: Second place finisher and beaten favorite Bellafina after the finish. Jockey Victor Espinoza said, "The outside horse was sort of pressing me on the pace a little bit, but nevertheless she was comfortable. When we were heading for home around the eighth pole, she was still running, but then in the blink of an eye, I was like, ‘Wow, what happened?' She ran a great race for her first race back from the Breeders' Cup. That's hard for any horse. She ran a good solid, second today." 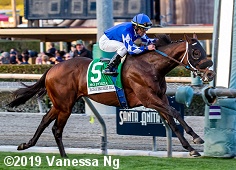 Closing out the opening day stakes septet, the $200,000 Mathis Brothers Mile (G2) featured a field of 11 three-year-olds going 1 mile on the turf. Hollywood Derby (G1) winner Mo Forza was sent off as the 6-5 favorite over 3-1 Neptune's Storm, 2nd in the Hollywood Derby, and 6-1 Kingly, 5th in the Twilight Derby (G2). 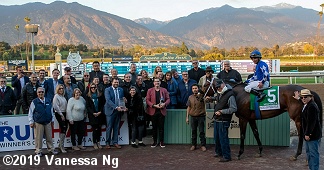 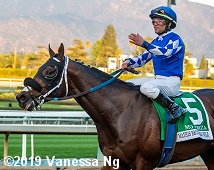 Left: Mo Forza in the winner's circle. Winning trainer Peter Miller said, "I thought we'd be sitting a couple lengths off the pace in third or fourth, and there we were in the back of the pack and five wide, and I'm going ‘Oh Geez, I don't know about this.' But the pace was hot, and Joel knows what he's doing, so everything worked out. He's like big kid that finally learns to use his feet and hands and it's all over. He always had the talent but he never really could put it all together I think we haven't seen the best of him yet. He is just starting to learn and once he relaxes a little bit better and doesn't want to lay in when he passes that last horse I think the sky is the limit."

Right: Mo Forza returns after the race. Winning jockey Joel Rosario said, "It was not my decision (to be so wide) but I just have to be with the horse, I loved making the move on the turn the way he did, I was just hanging on to the bridle and he just loved that so we stayed with that. The trip was good. He was happy where he was. I thought he could get a little closer, but it looked like wasn't having that today, so I left him where he was happy. I knew at some point he was going to get in his speed when it was there for me." 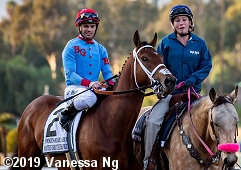 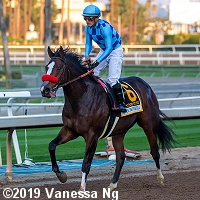 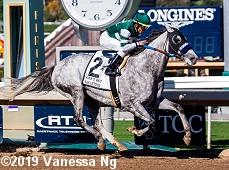 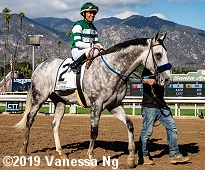 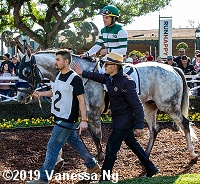 Left: Gift Box heads to the winner's circle. Winning trainer John Sadler said, "He trained with a lot of enthusiasm for this race. If you look at his last couple of works, 11 and four is like the old days of 10 and one, and he's been galloping out well in his works, so we thought we had him pretty ready. I hope we can go for a Santa Anita Handicap double. We have a lot of choices with these handicap horses. We'll see how he comes out of the race and maybe run him back east or maybe take Higher Power back there. We're blessed to have two or three horses in this division, so we're going to kind of mix and match."

Right: Gift Box in the paddock. Winning jockey Joel Rosario said, "He ran really well. He kind of broke a little slow, but then got it going a little bit. I got to the first turn and he was in front, and he was able to keep on going from that position and take it all the way." 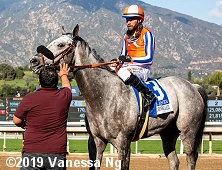 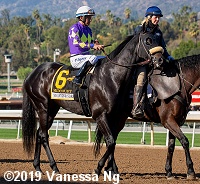 Left: Second place finisher King Abner returns after the race. Jockey Tyler Baze said, "He ran great. He's been training great and he ran like that. That's a monster we had to run against. I'm very proud of my horse. The race pretty much played out how I thought it would. I thought I was the speed of the race and he had to send pretty hard to get up inside me. Once everybody else left us alone, I made it a two horse race." 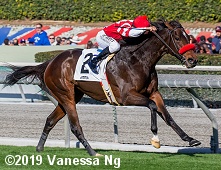 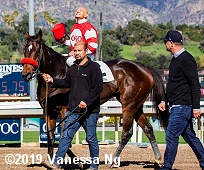 Kicking off the stakes schedule for the meeting was the $75,000 Lady of Shamrock Stakes for three-year-old fillies going 1 mile on the turf. Jockey Mike Smith sent 7-2 second choice Brill to the lead first time by through fractions of 23.06, 47.62 and 1:12.38 while pressed by 9-1 Angel Alessandra and stalked by 6-5 favorite Keeper Ofthe Stars. Turning for home Brill left the field behind to win by 1 3/4 lengths over Keeper Ofthe Stars in 1:35.75. It was another 1 1/4 lengths back to 9-2 third choice Lucky Peridot third.

Winning jockey Mike Smith, who replaced regular rider Flavien Prat who missed his mounts due to illness, said, "She had the blinkers off today, but she turned it on really nice and handled the grass really well. That's the sort of race we've been looking from for her." Trainer Don Chatlos added,  “We felt she’d be on the lead. She’s just a quick horse.  She had been chasing some very fast fillies earlier this year at Oaklawn Park and it didn’t look like there was anything in here today of that caliber. We put her on the grass because being by Medaglia d’Oro, we thought she’d like it and we think the grass will be better for her in the long run.”