The feature race on Saturday of closing weekend at Del Mar was the $300,000 Hollywood Derby (G1) for three-year-olds going 1 1/8 miles on the Jimmy Durante turf course. Conditions were typical for late November at the seaside oval, with the 6,027 fans in attendance under cloudy skies and temperatures in the low 60's, the main track rated fast and the turf going good. Mo Forza was sent off as the 11-4 favorite in the field of 12 off his win in the Twilight Derby (G2). In to challenge him included 4-1 second choice Digital Age, 5th in the Hill Prince (G2), and 5-1 third choice Neptune's Storm, 3rd in the Twilight Derby after winning the Hill Prince. 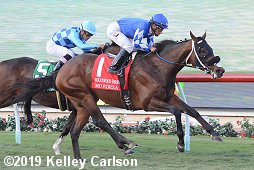 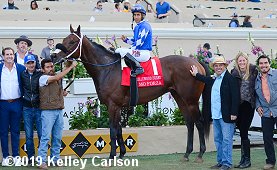 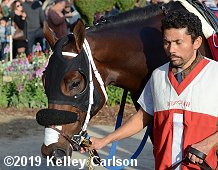 Left: Mo Forza in the winner's circle. Winning trainer Peter Miller said, "Really nice horse and a super ride. He got banged pretty good coming out of the gate but he came back strong. I think it's just maturity (for improvement in last two starts). I'd like to say it was some genius trainer move, but I'd be lying. I've always been high on this horse. He's always shown a lot of ability but it has taken time for him to put it all together, but we knew he had it in him."

Right: Mo Forza in the paddock. Winning jockey Paco Lopez said, "You can look good when you're riding the best horse in the race. You've just got to get lucky (and get on that horse). I was using my hands on him during the running. I took a bit of a hold on him. I think he liked my hands. When we made the lead (in the stretch), he was waiting (on other horses). But we got busy. Today was a special day for me. Here I am, Del Mar. Big horses. Good jockeys. And I get to win three stakes (on the day). You've got to be lucky. I was today." 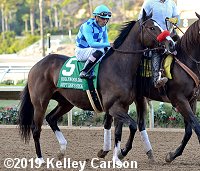 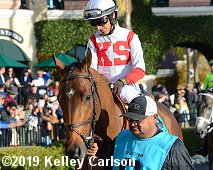 Left: Second place finisher Neptune's Storm in the post parade. Jockey Abel Cedillo said, "He broke good, and nobody seemed to want the lead so I took it. He was running easy and I thought we'd get there. He ran great. That was a hard one to lose."

Right: Third place finisher Standard Deviation in the paddock before the race. Jockey John Velazquez said, "We ran out of racetrack. We just got a little too far back. I had a good trip otherwise." 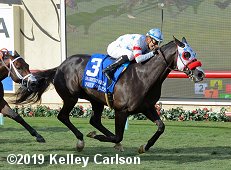 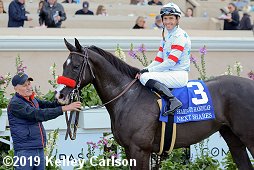 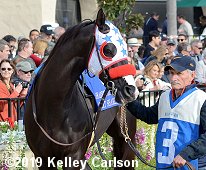 Left: Next Shares in the winner's circle. Winning trainer Richard Baltas said, "I think for him it's always good to have a little cut in the ground. He doesn't like the firm turf, he likes it a little softer. It was very rewarding. I never gave up on him (1 for 7 in 2019); he just had a couple bad trips. I didn't do any rain dances. I'm running seven or eight horses on the grass and those that like it will run well and those that don't won't. This horse was ready today and had a great trip."

Right: Next Shares in the paddock before the race. Winning jockey Jose Valdivia Jr. said, "I had to wait for room (on the turn). I was between Flavien (Prat on River Boyne) and Johnny (Velazquez on Ritzy A.P.). When Flavien went one way, I went the other. The hole opened up for me and this horse was there. I knew I was on a lot of horse all the way. I just needed a spot to run." 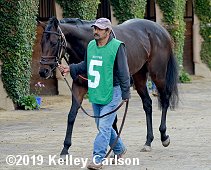 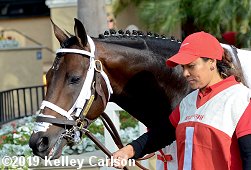 Left: Second place finisher and beaten favorite Sacred Life in the paddock before the race. Jockey Javier Castellano said, "I had to check pretty good near the quarter. And it's a short stretch here and I just didn't have enough time to get there in the end." 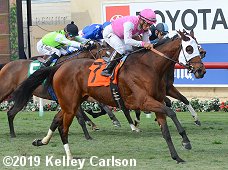 The $100,000 Red Carpet Handicap (G3) was originally scheduled for Thanksgiving Day but was moved to Saturday when the Thursday card was cancelled due to rain. A field of 7 older fillies and mares went to post for this 1 3/8 mile turf contest with Autumn Miss (G3) winner Keeper Ofthe Stars sent off as the 6-5 favorite over 3-1 Lostintranzlation, 5th in the Kathryn Crosby, and 7-2 Strike at Dawn, 6th in the Autumn Miss.

Jockey Flavien Prat sent Lostintranzlation to the lead first time by through fractions of 24.44, 49.17, 1:14.74 and 1L39.70 while pressed by Strike at Dawn and stalked by 7-1 fourth choice Vibrance. Turning for home, Lostintranzlation tired allowing Strike at Dawn to inherit the lead through 10f in 2:04.06. 23-1 longest shot Zuzanna, 6th early under Paco Lopez, came through between horses on the turn and rallied to win by 1 1/2 lengths over late-running 18-1 Curlin's Journey in 2:16.29. It was another head back to Vibrance third, while favorite Keeper Ofthe Stars was 4th early but failed to rally finishing 6th beaten 7 3/4 lengths.
Full results chart from DRF 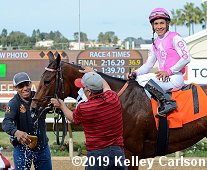 Left: Zuzanna in the winner's circle. Winning trainer Bob Hess Jr. said, "I really wasn't looking at this race. I had her (booked) on a plane next week to go to Florida for the Claiming Crown. But Kurt (Hoover, co-owner) nudged me to go here. My reservation (about running) was that I've never trained an $8,000 claimer to win a Grade 3. But on the other hand, we thought 1 3/8 miles could work, she loves Del Mar and she really worked well over this turf course. To me, she's an easy read; when she's ready, she's ready and she said, ‘Hey Bob, let's run.'"

Right: Zuzanna returns after the race. Winning jockey Paco Lopez said, "Bob told me I could put her anywhere I wanted to in the race. Front, back, inside, outside. He said this mare would run anywhere you wanted. So I rode her with a lot of confidence. I had a bit of trouble on the turn (for home). Horses inside and outside me. But I got clear and she was game." 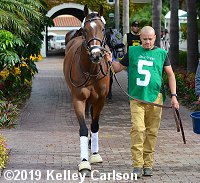 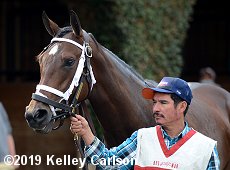 Left: Second place finisher Curlin's Journey walks over before the race. Jockey Ruben Fuentes said, "If I didn't have a little trouble in the stretch, I'm going to win it. She ran great."

Right: Third place finisher Vibrance in the paddock. Jockey John Velazquez said, "I got in tight at the quarter pole and I had to wait. Once I got clear, she came running." 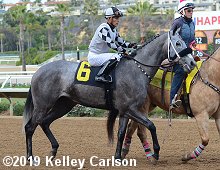 Sixth place finisher and beaten favorite Keeper Ofthe Stars in the post parade. The Jonathan Wong trainee has a record of 5 wins, 0 seconds, and 3 thirds in 11 starts, erning $185,151 for owner Tommy Town Thoroughbreds. 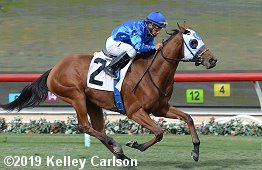 Kicking off the Saturday stakes quartet was the $100,000 Jimmy Durante Stakes (G3) for 2-year-old fillies going 1 mile on the turf. Maiden winner Princesa Caroline was sent off as the 9-10 favorite in the field of 11 over 5-2 Alms, winner of the Matron (G3), and 6-1 Croughavouke, 6th in the Breeders' Cup Juvenile Fillies Turf (G1). 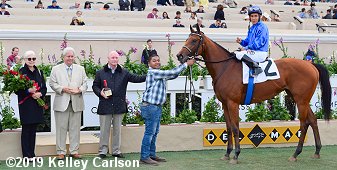 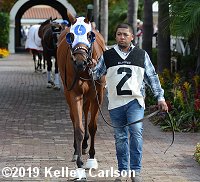 Left: Alms in the winner's circle. James Bardean, assistant to winning trainer Mike Stidham said, "She shipped in very well and seems to like it here. We had her sister and we've had high hopes for her all along."

Right: Alms walks over before the race. Winning jockey Paco Lopez said, "I had a perfect trip. Michael (Stidham, trainer) told me to get a spot behind the speed and it worked out. She came away from there well and we got a good spot. The course was good. I'd heard about all the rain here, but the course was very good. Not soft; just right. When I asked her she gave me a big kick." 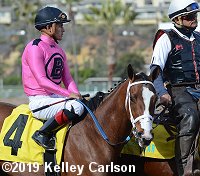 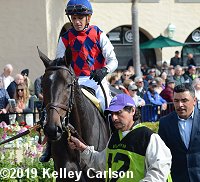 Right: Third place finisher and beaten favorite Princesa Caroline in the paddock. Jockey Javier Castellano said, "It all went great for us. We were in a good spot and she handled the course and everything else very well. She just didn't bring her big punch with her today." 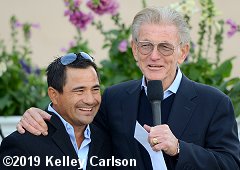 Immediately before the Hollywood Derby, Del Mar Thoroughbred Club hosted a retirement ceremony in the winner's circle for Corey Nakatani. He injured his back after a fall in August of 2018 and has not returned to the saddle, instead announcing his retirement last week. The 49-year-old won 3,909 races and over $234 million in purse earnings. In a press release he said, "The time has come to officially announce my retirement from the sport of horse racing. Although I never imagined this is how my career would end, I am very proud of my accomplishments and know that I competed at the very highest of levels, which gives me a sense of satisfaction. This game gave a young kid from Covina a purpose in life and I will forever be grateful for the opportunities it has given me. Without these amazing horses, I never would have considered my family and myself so blessed."