Closing out the stakes action on Pacific Classic weekend was the $200,000 Del Mar Mile Handicap (G2) for older horses going 1 mile around 2 turns of the firm Jimmy Durante Turf Course. Just 11,261 fans were on hand Sunday afternoon at the seaside oval, enjoying sunny skies and temperatures in the high 60's. Bowies Hero was sent off as the 7-5 favorite in the field of 10 off his win in the Eddie Read (G2). In to challenge him included 11-2 second choice Sharp Samurai, 4th in the Eddie Read after finishing 3rd in the American (G3), and 13-2 third choice Bolo, winner of the Shoemaker Mile (G1). 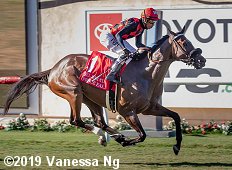 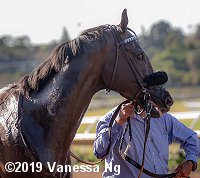 Left: Prince Earl in the winner's circle. Winning trainer Phil D'Amato said, "I thought a lot of him as a 3-year-old. He had some unlucky trips in some pretty strong races his last two as a 3-year-old. We gave him plenty of time off, did a minor throat procedure on him and he's come back with a vengeance as a 4-year-old. We decided to take a big shot here and got a great ride by Geovanni Franco."

Right: Prince Earl heads back to the barn after the race. 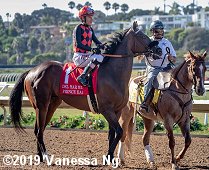 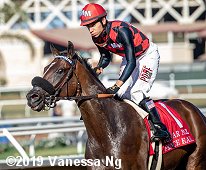 Right: Prince Earl returns after the race. Winning jockey Geovanni Franco said, "Phil said 'He's going to run big; just be patient.' I had the good post (No. 1) to save ground on the grass and it worked out just that way. He was very responsive to me all the way around. When I asked him, he had a nice kick. It was a lovely ride." 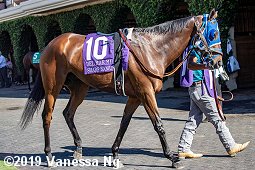 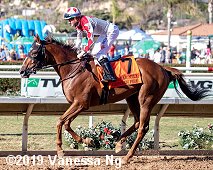 Left: Second place finisher Sharp Samurai in the paddock before the race. Jockey Joe Talamo said, "I had a perfect trip. Sat behind the leaders, then he cut it loose in the lane. I thought I was going to win it there for a bit, but could only get second."

Right: Third place finisher Grecian Fire returns after the race. Jockey Kent Desormeaux said, "I could have used some climate control. We were in tight all the way and the horse outside me pushed me down inside for most of the trip. Other than that, it was good." 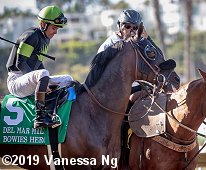