The feature race on the third Saturday of Del Mar's Bing Crosby Season was the $100,000 Native Diver Stakes (G3) for older horses going 1 1/8 miles around 2 turns of the main track. Conditions were excellent with sunny skies and temperatures in the low 70's at the seaside oval. After 2 scratches, a field of just 4 went to post with Roadster sent off as the 4-5 favorite off 2nd place finishes in the Affirmed (G3) and the Damascus. In to challenge him included 11-4 second choice Midcourt, winner of the Comma to the Top Stakes, 7-2 third choice Two Thirty Five, 2nd in the Comma to the Top after winning the Harry F. Brubaker, and 9-2 longest shot Extra Hope, 3rd in the Damascus. 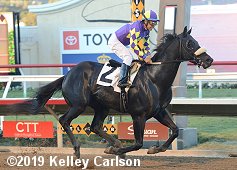 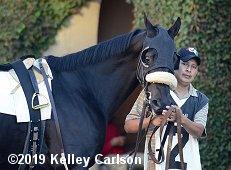 Left: Midcourt in the winner's circle. Winning trainer John Shirreffs said, "It wasn't the way I expected. I didn't think they'd take off that soon and go to the lead. But Victor rode him great and he wanted to run today. He's been training well but there's always a step up they have to take in the afternoons. You hope there's a realization then. He's doing really well right now so we'll go on to Santa Anita and see what we can do."

Right: Midcourt in the paddock before the race. Winning jockey Victor Espinoza said, "The whole thing today was I knew I had to let him do what he wants. He's that kind of horse. I knew there wasn't much speed in there today. And even though he's never been on the lead in his races, I thought he might if he broke OK. He got out of there well and I gave him just a little encouragement and he went to the front. He was going so easy doing it, I knew when it came time he was really going to go." 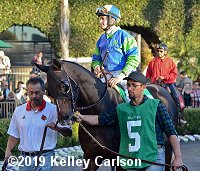 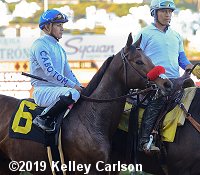 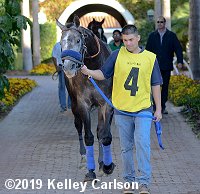 Last place finisher and beaten favorite Roadster in the paddock. The 4-5 choice started awkwardly but broke with the field, settled in 3rd or 4th 2 1/2 lengths off the pace under jockey Drayden Van Dyke, but tired badly late to finish last beaten 9 3/4 lengths. The Bob Baffert trainee has a record of 3 wins, 2 seconds, and 1 third in 8 starts, earning $752,200 for owner Speedway Stable.