The highlight race of the Oaklawn Park spring meeting is the $1 million Arkansas Derby (G1), for 3-year-olds run at 1 1/8 miles on closing day and worth 100 points in the Kentucky Derby Championship Series. The estimated 67,500 fans enjoyed sunny skies and temperatures in the mid 70's at the historic Hot Springs oval. As expected Rebel (G2) winner American Pharoah was sent off as the 1-10 favorite in the field of 8. In to challenge him included 7-1 second choice Far Right, winner of the Southwest (G3), and 16-1 third choice Madefromlucky, second in the Rebel last out.

Jockey Angel Cruz sent 38-1 longest shot Bridget's Big Luvy to the front and he set fractions of 22.77, 45.99, and 1:10.54 while as many as 3 lengths in front of American Pharoah stalking him in second. On the far turn, Bridget's Big Luvy tired badly as American Pharoah easily took over the lead and quickly opened up a 5 1/2 length lead on 20-1 Mr. Z through 1 mile in 1:35.94. Kept to task by regular rider Victor Espinoza, American Pharoah finished up 8 lengths in front of late-running Far Right in 1:48.52 over the fast track. It was another 3/4 length back to Mr. Z third.

Also check out Untapable winning the Apple Blossom and Race Day winning the Oaklawn Handicap during the Racing Festival of the South at Oaklawn. 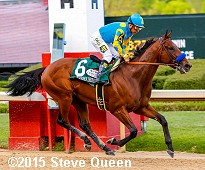 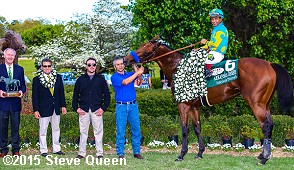 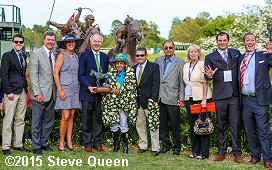 Left: American Pharoah in the winner's circle. Winning trainer Bob Baffert said, "He's an amazing horse. With the way he works, he's always been a professional horse from the start. We were hoping he could do something like that and he showed it today. We're so excited about him." Baffert said he will ship directly to Churchill Downs from Oaklawn.

Right: Arkansas Governor Mike Beebe presents the trophy for the Arkansas Derby. Winning owner Ahmed Zayat said, "I know that he is a very talented and very fast horse, but today he showed us a different dimension. This horse can do anything. He's brilliant." Baffert added, "He's matured substantially. We just worried about getting a clean break and he did, and then Victor rode him with a lot of confidence." 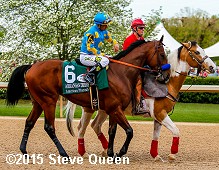 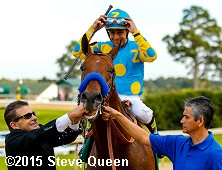 Right: American Pharoah returns after the race. Winning jockey Victor Espinoza said, "The way this horse runs is unbelievable. I don't feel like he's running that fast and then I look back and he's so far ahead. He was doing it by himself and doing it easy. I'm excited. It's the first time I've gone into it in back-to-back years with horses like this. I think I'm even more excited this year. Bob and I go way back. He's always been a help to me." 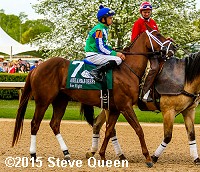 Left: Second place finisher Far Right in the post parade. Trainer Ron Moquett said, "Mike (Smith) said that when he saw (American Pharoah) kick clear he was just going to do enough to get second and he did. At that point it didn't matter if it was two lengths or 10 lengths, second is still second. We'll hope for maybe some different circumstances (in the Kentucky Derby) and just like everybody else going there we'll need some of the best luck."

Right: Third place finisher Mr. Z in the infield walking ring. Trainer D. Wayne Lukas said, "I thought we were going to be second, and then damn, he gassed a little bit there. I put the blinkers back on and we got back to what he needed. Coming back in two weeks (from the grade I Louisiana Derby), I think if we'd had more time we could have been a clear second. Obviously, we were not going to beat the winner." 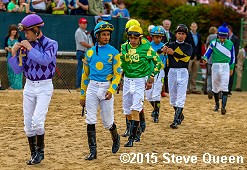 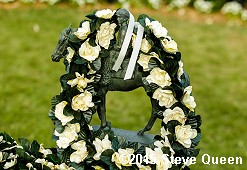 Left: The jockeys walk over to the infield walking ring .

Right: The Arkansas Derby trophy and gardenias in the winner's circle earlier in the day. 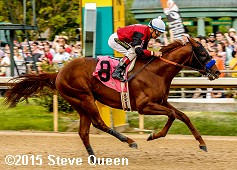 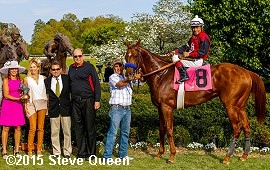 Immediately before the Arkansas Derby, a field of 7 three-year-olds went 1 mile on the main track in the $100,000 Northern Spur Stakes. Jockey Mike Smith sent 8-5 favorite Hillbilly Royalty to the front and he set fractions of 23.30, 46.83, and 1:11.09 while stalked by 10-1 Supermason. Hillbilly Royalty continued to lead to the 1/8 pole by 9-5 second choice Wolf Man Rocket, fifth early under Victor Espinoza, came out 4 wide for room and rallied to win going away by 1 3/4 lengths in 1:36.48. It was a long 7 lengths back from Hillbilly Royalty to 9-1 Poseidon's Way third.

Jimmy Barnes, assistant to winning trainer Bob Baffert said, "Wolfie got it done today. He showed a lot of heart. Stretching him out really helped, We've always wanted to run him longer, but we'd enter him and the race wouldn't go, and then we got him in a race but he coliced so that didn't work out either. Now we've broken our maiden in a stakes race." Owner Frank Fletcher added, "Well, isn't that really something? I think he's the only maiden to ever win this stakes race."