The highlight race of the Santa Anita winter-spring meeting is the $600,000 Santa Anita Handicap (G1) presented by San Manuel Indian Bingo and Casino, featuring the best older handicap horses on the west coast going 1 1/4 miles over the main track. Conditions were excellent for the 30,7133 fans at the historic Arcadia oval, with sunny skies and temperatures in the low 70's. Malibu (G1) winner McKinzie was sent off as the 2-5 favorite in the field of 6 after finishing second in the San Pasqual (G2). In to challenge him included 2-1 second choice Gift Box, winner of the San Antonio (G2), and 10-1 third choice Campaign, an allowance winner last out.

Jockey Kent Desormeaux sent 13-1 Prime Attraction to the lead first time by through fractions of 24.24, 49.23, and 1:13.70 while pressed by Gift Box and stakked by McKinzie. At the top of the lane Prime Attraction tired allowing Gift Box to inherit the lead through 1 mile in 1:38.37. McKinzie moved up to poke his head in front midstretch but Gift Box, confidently handled by Joel Rosario, fought back late to win by a nose in 2:03.02. It was a long 3 3/4 lengths back to late-running 53-1 Mongolian Groom third. 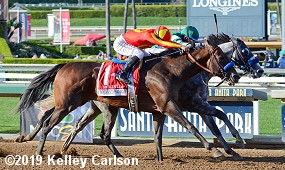 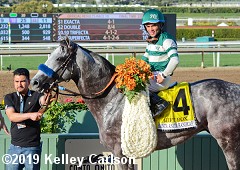 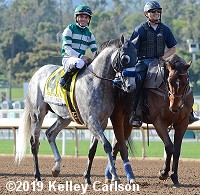 Left: Gift Box in the winner's circle. Winning trainer John Sadler said, "This is very special. I grew up with this race, to win it two years in a row is incredible. I came here as a kid with Lou Rowan when Quicken Tree won the Big Cap (1970), so it means a great deal to me. Joel rode a great race, you could see that he had a lot of horse around the turn and he was just sitting on him. To beat a top horse like McKinzie in a photo like that. This was the plan when we bought this horse and it happened. We couldn't be happier." Winning jockey Joel Rosario said, "He broke perfect out of there, John told me to keep him close and when he wants to go maybe just follow someone. He did great and it was a good race turning for home. I knew McKinzie was coming for us in the last part. (Gift Box) is a cool horse, he was very tough in the end. He showed a lot of heart today."

Right: Gift Box in the post parade. Winnig owner Kostas Hronis said, "I really thought Gift Box was going to win easy but then McKinzie came flying, I didn't see that coming so I was grateful we got the bob. The Santa Anita Handicap is a big race for us. We grew up coming to this track and we love everything that Santa Anita stands for and to have this race get rescheduled and everything, Gift Box acted like a professional and waited patiently and it turned out great. It's really good that we didn't have to travel with him and he could stay home and win this race." 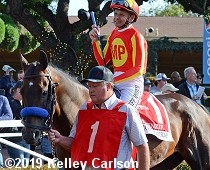 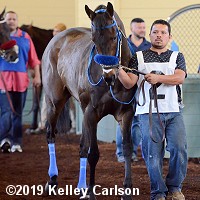 Left: Second place finisher and beaten favorite McKinzie in the paddock. Jockey Mike Smith said, "It was a tough beat, I don't know. I think I was in front I just didn't get the bob, you know. There's not a whole lot you can do about that. It's part of the game."

Right: Third place finisher Mongolian Groom in the paddock. The 53-1 longhest shot sat 4th early 5 lengths off the pace under Geovanni Franco, then held on to finish 3rd beaten 3 3/4 lengths. The Enebish Ganbat trainee improved his record to 2 wins, 1 second, and 2 thirds in 9 starts, earning $150,590 for owner Mongolian Stable. 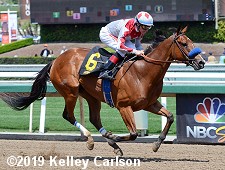 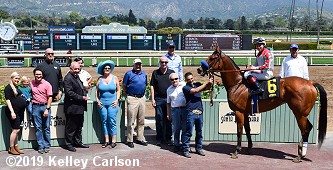 Kicking off the stakes action on Saturday was the $200,000 Evening Jewel Stakes for California-bred 3-year-old fillies sprinting 6 1/2 furlongs on the main track. 23-1 Naughty Tiger led down the back through an opening quarter of 21.96 before 40-1 Violette Szabo gained the front through a half in 45.29. Turning for home, jockey Drayden Van Dyke moved 1-2 favorite Sneaking Out wide for room and she swept to the front, quickly opening up a 4 length lead through 3/4 in 1:10.85. Kept to task by Van Dyke, Sneaking Out cruised the rest of the way to win by 2 1/2 lengths over late-running 11-2 third choice Dr Wysong in 1:18.07. It was another 2 1/4 lengths back to 58-1 longest shot Ruby Bradley third.

Winning jockey Drayden Van Dyke added, "She bobbled right at the start, but she picked it up. I loved my position early. The track is deep, so I didn't want to go to fast early. I let those two fillies go and gave her a tap at the 3/8 and she just took off. We eased up nearing the wire. I think she has a lot more left in the tank." Winning owner Kevin Nish added, "We were there when this one was born and we helped towel her off, to have her run as good as this, it's hard to say. We're normally racing up at Golden Gate and coming down here with a filly that is good enough to win a stakes that's a special day for everybody. We just love this horse, she loves to run, she loves racing, you can see her in the paddock all puffed up and full of herself on her toes telling everyone else 'Stay out of my way, I've got this handled.'" 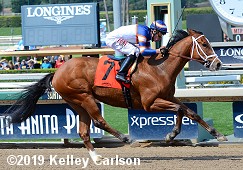 Winning owner Nick Alexander said, "In the paddock he was jumping around for the first time in his life like he wanted to do it. In the walking ring he kind of took off on the groom. Once they tried to put the jock up he acted like a new horse. The name comes from the movie Forest Gump, it's one of my favorite movies. I've seen it 20 times." Trainer Steve Miyadi added, "He's still a work in progress. His last race at Golden Gate helped him, no question. He's still slow to change leads, not in the morning, but in the afternoon; we've got some work to do. I was very happy to get Geo (Franco) back on him. We go way back together, to Golden Gate."

On to the Santa Anita Derby, Oaks, Providencia, and Royal Heroine Stakes