The feature race on Saturday at Santa Anita was the $200,000 Las Virgenes Stakes (G2) for 3-year-old fillies going 1 mile on the main track. It is also a points-scoring race with the winner earning 10 points in the Road to the Kentucky Oaks. Earlier rains downgraded both the main track and turf course to "good", with the races held under overcast skies and temperatures in the high 50's for the 7,848 fans in attendance. Breeders' Cup Juvenile Fillies (G1) fourth place finisher Bellafina was sent off as the 1-10 favorite in the short field of 5 off her win in the Santa Ynez (G2). In to challenge her included 6-1 second choice Enaya Alrabb, a close second in the Starlet (G1) at Los Alamitos, and 13-2 third choice Mother Mother, 2nd in the Santa Ynez. 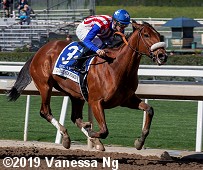 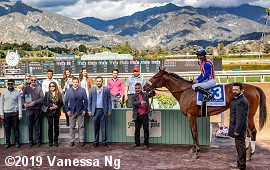 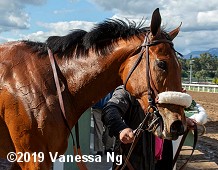 Left: Bellafina in the winner's circle. Winning trainer Simon Callaghan said, "I wasn't surprised to see her on the lead. When you're 1 to 9, you just do what you've got to do. I think the fractions were pretty legit on a slightly sticky track. She did what she had to do and it's great to get the win. I was a worried a little that she was in front, but I left it to Flavien, because horses had been closing today and winning, so we may have won despite the bias. I think maybe that's why (Enaya Alrabb) was finishing so well at the end."

Right: Bellafina heads back to the barn. Winning jockey Flavien Prat said, "She was good, as always. I thought Mother Mother would show more speed with the blinkers, but it seemed like everybody was waiting and watching me, so I tried to bide my time and wait as long as I could. As soon as she saw (Enaya Alrabb), she re-engaged." 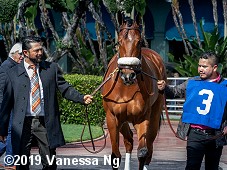 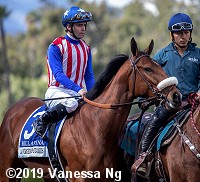 Left: Bellafina in the paddock before the race. Winning owner Kaleem Shah said, "The track was a little sticky and I don't think it was the best surface for her, but that last quarter, I think her class pulled her through. We know now she can be on the lead. My daughter Sophie is here, who just got engaged. Her fiancé, Nick, is here today as well and it's his first time to Santa Anita so this is a joyous win for all of us." 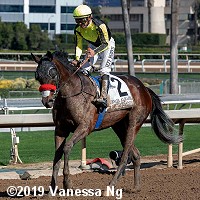 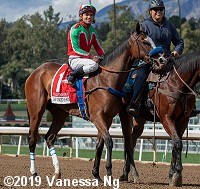 Second place finisher Enaya Alrabb returns after the race. Jockey Mike Smith said, "She ran too good to lose. I had a good chance, but those champions, you gotta really run to beat them. I think if we take the blinkers off, she'll give us what she's got when we need it. It's in there." 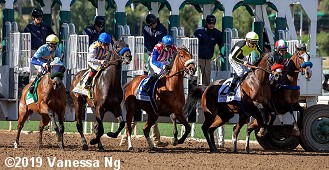 The horses break from the gate for the Las Virgenes Stakes. Callaghan added, "We'll enjoy this and take a deep breath. It's never easy, but we got the win. I think we'll definitely go on from here to the (Santa Anita) Oaks (April 6). She did what she had to do today. I think the track's been favoring horses coming off the pace and it's a little bit sticky. They went legit (fractions). I actually thought we'd sort of let Mother Mother go and be outside of her, but you can't be critical of a win. We got the job done and that was always the plan, to get two races before the Santa Anita Oaks and we'll give her a little freshening and look forward to that." 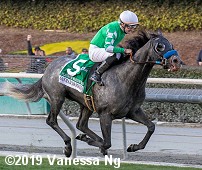 Closing out the stakes trio on Saturday, a field of 13 older horses went to post for the $200,000 San Marcos Stakes (G2), a 1 1/4 mile turf contest out of the downhill chute. Hollywood Turf Cup (G2) winner Chicago Style was sent off as the 3-1 favorite off a 4th place finish in the San Gabriel (G2). In to challenge him included 7-2 Dabster, 3rd in the San Antonio (G2) on opening day, and 4-1 Epical, winner of 2 straight in allowance company.

Jockey Evin Roman sent 38-1 Roman Rosso to the lead first time by through fractions of 23.37, 48.22, and 1:13.24 while pressed by 53-1 India Mantuana and stalked by 16-1 Platinum Warrior and 16-1 Unapologetic. Turning for home, Roman Rosso tired as Platinum Warrior inherited the lead through 1 mile in 1:37.67. Platinum Warrior opened up a 2 1/2 length lead midstretch through 9f in 1:50.02. Jockey Tyler Baze sent Epical 3 wide for his rally but Platinum Warrior, confidently handled by Shane Foley, held him off by 3/4 length for the mild upset in 2:02.37. It was a neck back to 8-1 Beach View third, while favorite Chicago Style trailed throughout and checked in 5th. 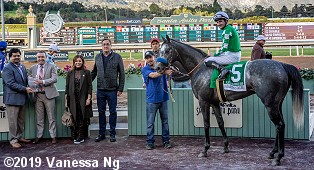 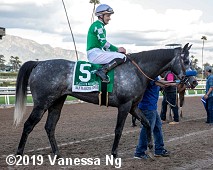 Left: Platinum Warrior in the winner's circle. Winning trainer John Sadler said, "Since we have been training we were always looking at the longer races, we were kind of waiting. The preps are always a little shorter, so we thought he ran well last time. He got beat by two lengths, kind of got stuck on the inside so the mile and a quarter, we were really looking forward to that today. It will be kind of up to the owner (for next start, Dubai or San Juan Capistrano) Michael Donahue is kind of his representative in Europe, and they have horses all over the world, but hopefully we will be able to run him in some longer races as we go along, he can run 1 1/2 no problem."

Right: Platinum Warrior returns after the race. Winning jockey Shane Foley said, "Without a doubt, it was well worth the travel from Ireland for this win. I let him go, let him dictate it. I knew his speed was his main attribute. Being on the front end turning into the straight was a bit daunting but I just had to play him at his strengths and I knew if we turned it into a sprint, he'd sprint away. I knew we needed to make a stand to make it count." 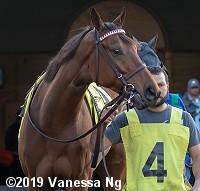 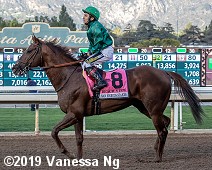 Left: Second place finisher Epical in the paddock before the rae. Jockey Tyler Baze said, "He's not a real good horse in the gate. I didn't get a chance to get him in the clear, which is what he wants. He's got a stride a mile long. He's really an amazing animal." 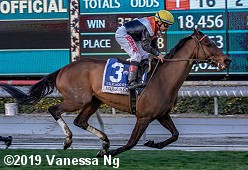 Fifth place finisher and beaten favorite Chicago Style just past the finish line. The Tom Proctor trainee has a record of 6 wins, 1 second, and 1 third in 13 starts, earning $312,328 for owner-breeder Glen Hill Farm. 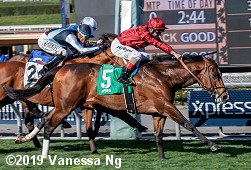 The $100,000 Thunder Road Stakes (G3) featured a field of 6 older horses going 1 mile on the turf. Mathis Brothers Mile (G2) winner River Boyne was sent off as the 7-10 favorite over 7-2 second choice Desert Stone, 2nd in the Mathis Brothers, and 6-1 third choice Ohio, winner of the Cotton Fitzsimmons Mile Handicap at Turf Paradise. 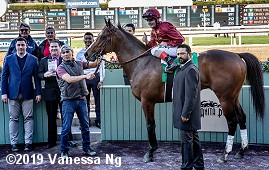 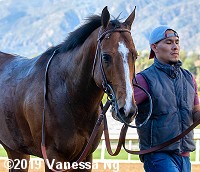 Left: True Valour in the winner's circle. Winning trainer Simon Callaghan said, "We knew there wasn't probably not going to be that much speed on, but we had to stick to the plan take our time get him to relax and I just said to Andrea I prefer you to come in late than too early and we held Flavien in in a crucial time and he rode an absolutely perfect race.

Right: True Valour heads back to the barn after the race. Winning jockey Andrea Atzeni said, "I put him in the race too early, he hadn't run in quite a bit of time so the horse was a little bit fresh and probably got a little bit tired, but today it was keen to speaking to Simon earlier and give him a bit more time through the race and come around late around the outside. The win was always going to happen, these things just take time. I'm having a great time here in America. I was going to go back three weeks ago, but I changed my flight to the end of February. This is a good place to be, keeping myself fit with the rides and the people have all been really great to me. Hopefully, I come back here." 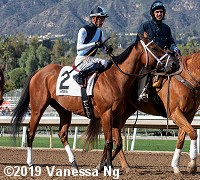 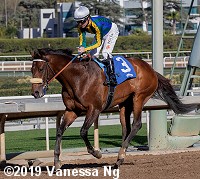 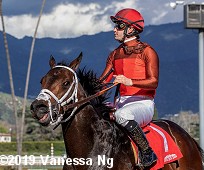 Fourth place finisher and beaten favorite River Boyne returns after the race. Jockey Flavien Prat, asked if he considered claiming foul for interference said, "I was going for a hole and it closed right away. I probably should've stayed on the fence."