The feature race on Thanksgiving Friday at Del Mar was the $200,000 Hollywood Turf Cup (G2) for older horses going 1 1/2 miles on the Jimmy Durante turf course. Conditions were excellent at the seaside oval with partly cloudy skies and temperatures in the low 70's with 5,248 fans in attendance. Last year's runner-up Chicago Style was sent off as the 9-5 favorite in the field of 7 off a disappointing 5th place finish in the Lure Stakes at Santa Anita after finishing 3rd in the John B. Connally Turf Cup (G3) at Sam Houston. In to challenge him included 5-2 second choice Bigger Picture, 3rd in the Sycamore (G3) at Keeneland after finishing a close 2nd in the Kentucky Turf Cup (G3) at Kentucky Downs, and 11-2 third choice Ashleyluvssugar, a close second in the John Henry Turf Championship (G2) after disappointing 6th in the Del Mar Handicap (G2).

Jockey Tyler Baze sent Ashleyluvssugar to the lead first time by through easy early fractions of 24.51, 50.65, 1:16.25, 1:41.79, and 2:05.17 over the firm going, while pressed by 10-1 Marckie's Water and stalked by 6-1 fourth choice You Gotta Wanna and Bigger Picture. Turning for home for the final time, Ashleyluvssugar opened up a 1 1/2 length lead to the 1/8 pole through 1 3/8 mile in 2:16.82 before tiring late. Favorite Chicago Style, 4 lengths off the pace in last early under Drayden Van Dkye, came out 5 wide into the stretch, but came in at the 1/16 pole, holding off Bigger Picture in the final strides to win by a neck in 2:28.53. It was another 1 1/4 lengths back to late-running 7-1 Beach View third. Flavien Prat aboard 6th place finisher Ya Gotta Wanna claimed foul against Van Dyke aboard Chicago Style for interference when he bore in, but the claim was disallowed. The stewards ruled that pacesetter Ashleyluvssugar (finished 5th), Marckie's Water (4th), and Chicago Style (winner) were all contributors to the trouble so the finishing order stood. 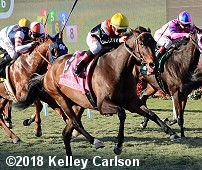 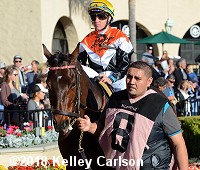 Left: Chicago Style in the winner's circle. Winning jockey Drayden Van Dyke, celebrating his first Hollywood Turf Cup victory, said, "I knew they were going slow, but my horse was relaxed and I was comfortable with where we were. If they go that slow the whole way they'd be tough to catch. He's a straightforward horse; you ask him and he gives. When it came time, I tipped him out and he went. It's sure fun to ride ones like him."

Right: Chicago Style in the paddock. Winning owner-breeder Craig Bernick (Glen Hill Farm) said, "He's had his issues, not making it to races until he was 4 and then missing most of this year, but all credit to (trainer Tom Proctor). He's never changed his ways, always patient and does right by the horse. Sometimes it works out." The win moved Tom Proctor past his late father Willard Proctor in all-time Del Mar stakes wins with 18. Proctor added, "He (Dad) was rootin' for me! (Due to the long layoff) Just had a little issue. It's good to win a race." 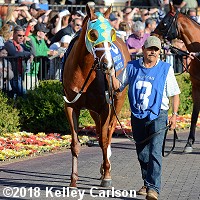 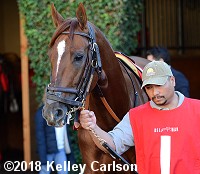 Left: Second place finisher Bigger Picture in the paddock before the race. Jockey Mike Smith said, "Aw, he ran dynamite. He ran too good to lose!" The Mike Maker trainee improved his record to 11 wins, 7 seconds, and 5 thirds in 37 starts, earning $1,374,135 for owner Three Diamonds Farm.

Right: Third place finisher Beach View in the paddock. Jockey Rafael Bejarano said, "He put in a good late run. I didn't want to go around, so I waited until there was a spot on the rail. Then he gave me a push." The Leonard Powell trainee improved his record to 3 wins, 2 seconds, and 3 thirds in 11 starts, earning $192,200 for owner Levy Racing.