The premier race for older fillies and mares during the Santa Anita fall meet is the $300,000 Zenyatta Stakes (G1), a 1 1/16 mile main track trip with the winner earning automatic entry into the Breeders' Cup Distaff. Conditions were similar to Saturday, with sunny skies and temperatures near 90. Last year's Breeders' Cup Distaff (G1) runner-up Abel Tasman was sent off as the prohibitive 1-10 favorite off wins in the Ogden Phipps (G1) and Personal Ensign (G1). In to challenge her included 11-2 second choice La Force, second in both the Beholder Mile (G1) and the Clement Hirsch (G1), and 11-1 third choice Vale Dori, Second in the Tranquility Lake Stakes after finishing third in the Santa Lucia. 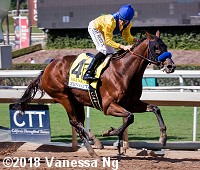 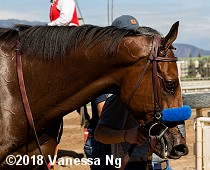 Left: Vale Dori in the winner's circle. Winning trainer Bob Baffert said, "She'd been working well, but she hadn't been getting away from the gate, and if she doesn't get away well, she doesn't run well (so blinkers were added). I think she got in her groove and showed up."

Right: Vale Dori heads back to the barn after the race. 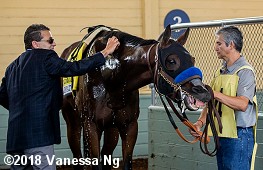 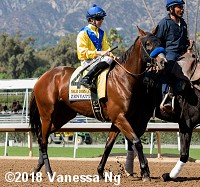 Left: Vale Dori in the paddock before the race.

Right: Vale Dori in the post parade. Winning jockey Joe Talamo said, "Bob said to try and get her out, whether she's first or second, and just get her into a real smooth rhythm. She was laying perfect right off of Tyler's filly (Shenandoah Queen) there and I had a lot of horse around the turn. I was just biding my time, just waiting for anyone to come before I let her loose and when I did, she really took off very nicely. I really thought Abel Tasman was going to come running but that's horse racing for you." 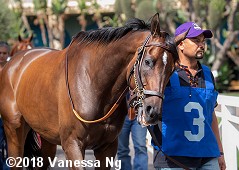 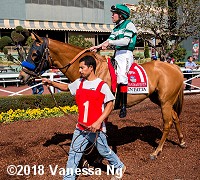 Left: Second place finisher La Force in the paddock before the race. Jockey Drayden Van Dyke said, "She settled nice like she always does and she made her run. It would have been nice to have a little pace up front but she ran a helluva race."

Right: Third place finisher Shenandoah Queen in the paddock before the race. The John Sadler trainee improved her record to 6 wins, 2 seconds, and 3 thirds in 21 starts, earning $248,610 for owner Hronis Racing. 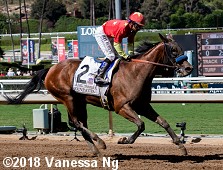 Sixth place finisher and beaten favorite Abel Tasman crosses the finish line. Trainer Bob Baffert said, "I'm worried about that mare because Mike said she was lethargic, and she's up there where all these sick horse are, so I hope she's not getting sick. She was never interested today all. I'm about as shocked as everybody else, but they'll do that. When I saw Abel break horrible like that, it looked like shades of Arrogate at Del Mar in the San Diego. She's never run a bad one. He said she felt sound and all that but she was just completely lethargic." Jockey Mike Smith added, "There's been a bit of the flu going around the backside with some of these horses so hopefully it's not hitting her, but it certainly could have. She kind of made a middle move down the backside to get herself into some sort of position to maybe make a run and I thought she could probably still win anyway. But then she just decided that was enough."

The $200,000 John Henry Turf Championship (G2) is not a Breeders' Cup Challenge race but is the major California prep for the Breeders' Cup Turf, with a field of 6 older horses going 1 1/4 miles on the turf. Liam the Charmer was sent off as the 11-4 favorite off an allowance win at Del Mar in his first start back since finishing 11th in the 2017 Del Mar Handicap (G2). In to challenge him included 3-1 second choice Ashleyluvssugar, 6th in the Del Mar Handicap (G2) last out, and 15-4 third choice Secretary At War off an allowance win.

Jockey Gary Stevens sent Ashleyluvssugar to the lead first time by and he set fractions of 23.43, 47.61, 1:11.42, and 1:34.48 over the firm going while pressed by Secretary At War and stalked by 9-2 Ann Arbor Eddie. Turning for home, Ashleyluvssugar continued to lead to the 1/8 pole through 9f in 1:46.19. Liam the Charmer, last early under Tyler Gaffalione, came out 4 wide into the stretch and rallied to win by 1/2 a length in 1:58.01. It was a length back to late-running 5-1 fourth choice Ya Gotta Wanna third. 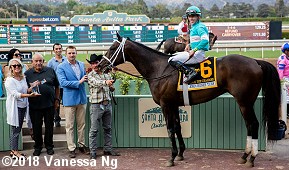 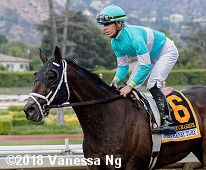 Left: Liam the Charmer in the winner's circle. Winning trainer Mike McCarthy said, "He's pretty easy to fall in love with; he's always been a nice horse. This graded stake is probably a year and a half overdue. He's just hitting his best stride now that he's five. He's like molasses. He just goes through the motions every day. He's a horse that doesn't give a whole lot of inclination that he's real good, that he's real bad, he just sort of goes about his job and obviously does it quite well, as we saw today. I'll go ahead and talk to (owners) Sol Kumin and everybody else and who knows, maybe he bought himself a ticket to the Breeders' Cup"

Right: Liam the Charmer returns after the race. Winning jockey Tyler Gaffalione said, "Mike said to not rush him out of there and let him find his footing. He put himself in the spot he needed to be and we saved all the ground. Going into the far turn I let him go in between horses and then kicked him out coming into the stretch and he really finished up nicely. All the credit goes to Mike and his entire team. They've done a great job with this horse." 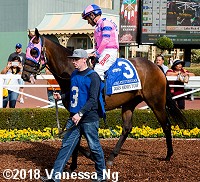 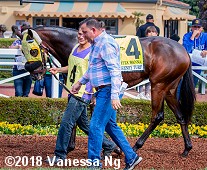 Left: Second place finisher Ashleyluvssugar in the paddock before the race. Jockey Gary Stevens said, "He ran a winning race. I couldn't believe we were getting passed, because my horse was running. The winner's a nice horse, no question." Trainer Peter Eurton added, "With him, we take it race to race at this stage. He's a trooper when he gets his trip as you saw today. He didn't run his race at Del Mar. Gary didn't ride him down there and he got covered up and couldn't get going. Gary rode a great race today, he really did. The winner's a nice horse, he just gunned us down."

Right: Third place finisher Ya Gotta Wanna in the paddock before the race. The Phil D'Amato trainee improved his record to 3 wins, 2 seconds, and 2 thirds in 12 starts, earning $165,450 for owners Mersad Metanovic Bloodstock, Michael House, and Aaron Sones.