The $1 million TwinSpires Louisiana Derby (G2) is the highlight of the Fair Grounds meeting, and is the major local Kentucky Derby prep race, worth 100 points to the winner as part of the Kentucky Derby Championship Series. Conditions were excellent in New Orleans with mostly sunny skies and temperatures in the low 70's. The main track was rated fast and the Stall-Wilson turf course was firm. A field of 11 three-year-olds went to post in this 1 1/8 mile test on Saturday afternoon, with War of Will sent off as the 4-5 favorite off wins in the LeComte (G3) and Risen Star (G2). In to challenge him included 4-1 second choice Spinoff, an allowance winner last out, and 6-1 third choice Country House, runner-up in the Risen Star.

Jockey Brian Hernandez Jr. sent 64-1 longest shot Lemniscate to the lead through fractions of 23.63, 47.68, and 1:11.54 while pressed by 8-1 fourth choice Sueno and Spinoff. Entering the lane Lemniscate tired badly to finish last as Spinoff moved up to take the lead through 1 mile in 1:36.84. 22-1 By My Standards, 4th early unde Gabriel Saez, came out 3 wide for room and rallied late to win by 3/4 length over Spinoff in 1:49.53. It was a long 5 lengths back to Sueno third, while favorite War of Will stumbled at the start, sat 4 lengths off the pace, but tired badly late to finish 9th beaten 12 lengths. Due to a timer malfunction the Louisiana Derby was hand-timed. 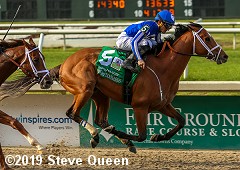 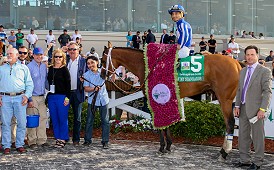 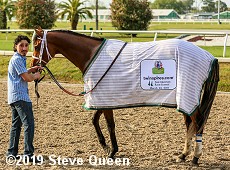 Left: By My Standards in the winner's circle. Winning trainer Bret Calhoun said, "When he was third the time before he broke his maiden it was a very disappointing race for us. It looked like he had the race in control and just didn't finish them off. It was a disappointing race. He bounced back and that's when the light came on. He was a different horse in the mornings from that point on. His breezes in the morning were just unbelievable. There were some fast works there and none of them were intentional. He just turned into a different horse."

Right: By My Standards heads back to the barn after the Louisiana Derby. Calhoun added, "It gives you a lot of confidence beating afield like that. (War of Will) had been very impressive for quite a while around here and very consistent. I knew we were up against it today, I didn't know exactly how we were going to stack up against those kinds of horses,, but our horse was doing very, very well and we took our chance." 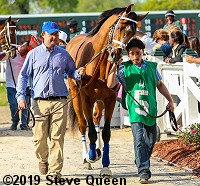 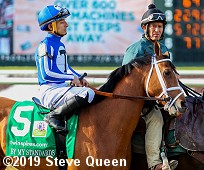 Left: By My Standards enters the paddock before the race. Winning jockey Gabriel Saez said, "I loved the horse since the day I got on him. He was working great in the mornings and he did a tremendous job. Bret and (wife and assistant) Sarah had done a tremendous job with him. I was really confident to be honest with you. I was hoping that he would broke on top and put me in the position that I wanted him to be and he did right off the bat. Thank God he ran well. I hope he has more in the tank; that would be great. Hopefully we can get the job done in the Derby, anything can happen. It's horseracing." 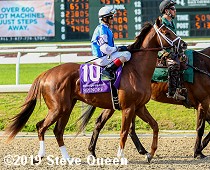 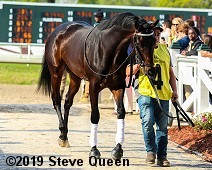 Left: Second place finisher Spinoff in the post parade. Jockey John Velazquez said, "We had a good trip. He was drifting away from the horses inside of me a bit, and I had to fight him to keep him with the others. Down the stretch I thought he was home free and then the other horse came to him."

Right: Third place finisher Sueno enters the paddock before the race. Jockey Corey Lanerie said, "He broke really good and I was laying second. I thought at the quarter pole that I was going to get the win you know. He was running so easy and had his ears pricked. Those horses just beat him today. No excuse." 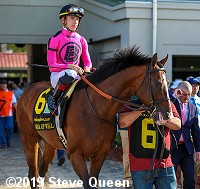 Left: Ninth place finisher and beaten favorite War of Will. Trainer Mark Casse said, "We think what happened was about four jumps out of the gate. He actually broke in front and if you watch he buckles on his right hind. We think he strained maybe a muscle or whatever. But he was significantly off after the race. (Veterinarian Dr. Robert McMartin) thinks he might have caught his stifle or something. We feel like he'll probably be a little better tomorrow and we're going to further evaluate him. I would not absolutely rule him out (of the Kentucky Derby) because this is something that he can get over very quickly."

Right: The trophy presentation for the Louisiana Derby.


The distaff counterpart to the Louisiana Derby is the $400,000 TwinSpires Fair Grounds Oaks (G2) for 3-year-old fillies, and worth 100 points to the winner as part of the Kentucky Oaks Championship Series. A field of 7 contested this 1 1/16 mile test, with Rachel Alexandra (G2) winner Serengeti Empress sent off as the 3-10 favorite. In to challenge her included 15-2 second choice Eres Tu, 3rd in the Rachel Alexandra, and 8-1 third choice Liora, 2nd in the Rachel Alexandra.

Jockey James Graham sent Serengeti Empress to the lead first time by through fractions of 24.12, 47.48, and 1:11.86 while pressed by 17-2 fourth choice Slewgoodtobetrue and Liora Turning for home Serengeti Empress stopped badly, was pulled up and vanned off bleeding through the nostrils. 11-1 Street Band, 4th early under Sophie Doyle, came out 3 wide to sweep to the front through 1 mile in 1:37.86. Kept to task by Doyle, Street Band drew off late to win by 3 3/4 lengths over Liora in 1:44.54. It was another 2 lengths back to 18-1 Sweet Diane third. 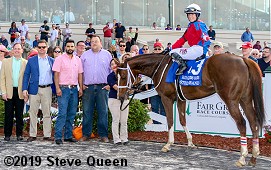 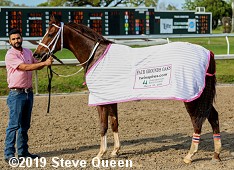 Left: Street Band in the winner's circle. Winning jockey Sophie Doyle said, "The race set up the same as last time. But I just managed to just get her to drop her head. In the last race, her head was up, I was getting hounded from behind and I didn't have as much room. Today we just had a beautiful trip and everything set up right. Her head dropped down today and she traveled into the bit where the last time he head was up and she was fighting me and every step was like 'relax filly, relax'. Today she took it like a professional and traveled great."

Right: Street Band heads back to the barn after the race. 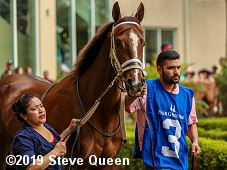 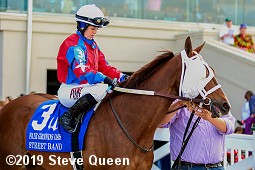 Left: Street Band in the paddock.

Right: Street Band heads out for the post parade. Street Band improved her record to three wins from eight starts with $310,325 in earnings. She is out of the Street Cry mare Street Minstrel, who also was trained by Larry Jones. Jones has saddled three winners of the Kentucky Oaks in Proud Spell (2008), Believe You Can (2012), and Lovely Maria (2015) with the first two also winning the Fair Grounds Oaks. 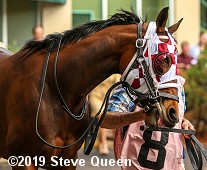 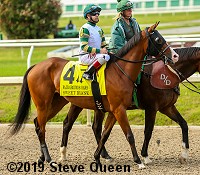 Left: Second place finisher Liora in the paddock. Jockey Channing Hill said, "I thought I had a perfect trip. She broke out a step on the outside, but she put herself in the game. Once I put [Serengeti Empress] away, I was just hoping my filly wouldn't pull up, and she didn't – she ran all the way to the wire. I cannot believe that horse went by me." 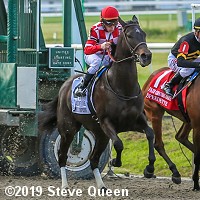 Beaten favorite and pulled up (officially credited with finishing last) Serengeti Empress at the start. The Tom Amoss trainee has a record of 4 wins, 0 seconds, and 0 thirds in 7 starts, earning $331,870 for owner Joel Politi. 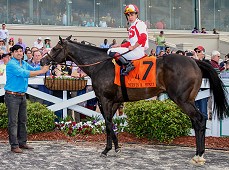 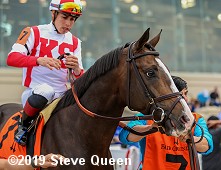 Left: Bricks and Mortar in the winner's circle. Winning trainer Chad Brown said, "I was very impressed with his ability to adapt to a very slow pace and also concede significant weight to the rest of the field and still prevail."

Right: Bricks and Mortar heads out to the track before the race. Winning jockey Irad Ortiz Jr. said, "He needs to have a target, so we didn't want to go to the lead. I tried to settle him without fighting him too much even though we were walking. I knew [Markitoff] was going to have something, and I knew we were going slow, so I just let him walk and kept close to him as a target." 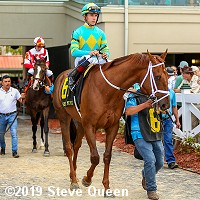 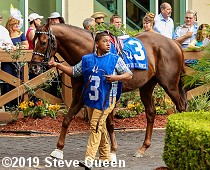 Left: Second place finisher Markitoff heads out to the track. Jockey Tyler Gaffalione said, "We had a perfect trip. He got in front and was real relaxed the whole way and has his ears up. [Bricks and Mortar] jumped on us pretty quick, but he started hanging. Our horse started to dig in and we just didn't get the bob."

Right: Third place finisher Synchrony in the paddock. Trainer Mike Stidham said, "Joe just said the turf is a little bit sandy and he didn't get a real good hold of it early. He just got behind a slow pace and.it was just a bad trip." Jockey Joe Bravo added, "He's got a lot of heart, he fought. The course is very loose, I guess this time of year it's been used up."


Kicking off the graded stakes quartet was the $400,000 New Orleans Handicap (G2) featuring a field of 9 older horses going 1 1/8 miles on the main track. Razorback Handicap (G3) runner-up Copper Bullet was sent off as the 2-1 favorite over 4-1 Mr. Buff, winner of the Jazil Stakes, and 11-2 Lone Sailor, 6th in the Mineshaft Handicap (G3).

Jockey John Velazquez sent 10-1 Noble Indy to the lead through fractions of 23.56, 47.26, and 1:12.15 while pressed by Mr. Buff and stalked by 9-1 Core Beliefs. Turning for home the pacesetters tired as Core Beliefs inherited the lead through 1 mile in 1:38.02. 7-1 Silver Dust put in a strong rally from 5th but Core Beliefs, confidently ridden by Florent Geroux held him off to win by 3/4 length in 1:51.36. It was another 3/4 length back to late-running Lone Sailor third. 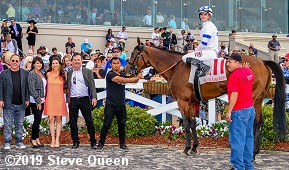 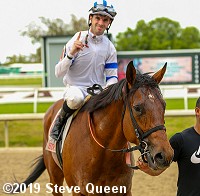 Left: Core Beliefs in the winner's circle. Winning trainer Peter Eurton said, "He loves the outside so much. We saw that in the Ohio Derby. He gets a little bogged down when he gets stuck on the rail."

Right: Core Beliefs returns after the race. Winning jockey Florent Geroux said, "I had horse, I was just hoping he'd keep his focus. That was my only concern, not whether we had enough horse, but keeping him busy and keeping him focused to the wire. He was trying to wander around and I just needed to keep him occupied." 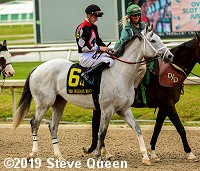 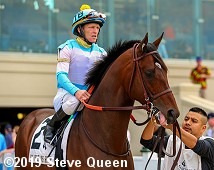 Left: Second place finisher Silver Dust in the post parade. Trainer Bret Calhoun said, "We were following the winner and had every opportunity down the lane to go by. Peter did a phenomenal job getting that horse ready off the layoff. I felt pretty good turning for home I thought we might get by. That horse just kept fighting on."

Right: Third place finisher Lone Sailor heads out to the track. Jockey James Graham said, "He showed what happens when he gets pace. He tried, and I hope he's going to take another step forward." 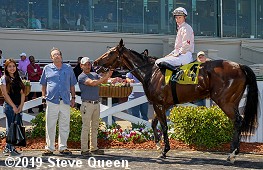 Kicking off the stakes action on Saturday was the $75,000 Crescent City Oaks for Louisiana-bred 3-year-old fillies going 1 mile 70 yards on the main track. Midnight Fantasy was sent off as the 1-2 favorite in the field of 7 over 7-2 Goodprofit and 11-2 Crescentcitypretty. 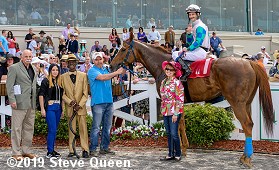 The $60,000 Costa Rising Stakes featured a full field of 14 Louisiana-bred older horses sprinting about 5 1/2 furlongs on the turf. Monte Man was sent off as the 8-5 favorite over 5-1 Afleet Ascent and 13-2 Win Lion Win.

Jockey Ashley Broussard sent 9-1 Roger Brown to the lead down the back through fractions of 21.62 and 45.21 while pressed by 15-1 In The Navy and stalked by Win Lion Win and 122-1 B B Special. Turning for home, jockey Kevin Smith moved Win Lion Win out for room and he quickly opened a 2 length lead on Monte Man. Monte Man closed the gap late but Win Lion Win held him off by a neck in 1:03.68. It was another 2 lengths back ti 35-1 Treys Midnite Moon third.