The $1 million Louisiana Derby (G2) is the highlight of the Fair Grounds meeting, and is the major local Kentucky Derby prep race and is worth 100 points to the winner in the Road to the Kentucky Derby. A field of 10 three-year-olds went to post in the 101st renewal of this 1 1/8 mile test on Saturday afternoon, under sunny skies with temperatures in the high 60's. Risen Star (G2) winner Intense Holiday was sent off as the 9-5 favorite over 3-1 second choice In Trouble, third in the Gotham (G3) last out, and 7-2 Vicar's In Trouble, winner of the Lecomte (G3) before finishing third in the Risen Star. 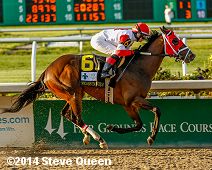 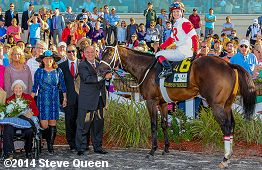 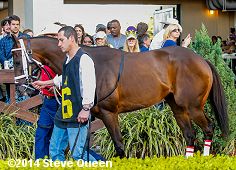 Left: Vicar's In Trouble in the winner's circle. Joe Sharp, assistant to trainer Mike Maker said, "We've liked this horse since Keeneland in October. And as he started to develop a little more, we said 'Wouldn't it be neat if we ended up on the big stage together in the Louisiana Derby, and if everything stays well, the Kentucky Derby.'" Maker added, "I like the way he handles the long stretch and he'll have a long one next out."

Right: Vicar's In Trouble in the paddock. Jockey Rosie Napravnik said, "You know he is a tiny horse but he's got a great big heart. It's the premier race at the track at the end of the meet. It's the race that you want to win." Owner Ken Ramsey said, "I had a lot of confidence in my horse. Popping the abscess to me meant a whole lot. That's why he didn't run so good (in the Risen Star), and the post and all of that. If twe hrow that last race out the horse was winning by 13 (lengths) and by 6 3/4 (lengths)." 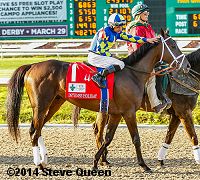 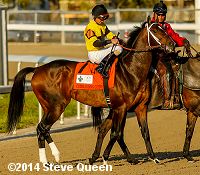 Left: Second place finisher and beaten favorite Intense Holiday in the post parade. Jockey Mike Smith said, "The inside horse jumped-out, right on me. But the race was over at that point. (Rosie Napravnik) rode a great race. A brilliant race actually. It turned it into a two furlong sprint not a 3/8's type race where we can run out."

Right: Third place finisher Commanding Curve in the post parade. Jockey Robby Albarado said, "He's progressing every time. I got eliminated at the start, but he ran on so easily. There's more there."


The distaff counterpart to the Louisiana Derby is the $400,000 Fair Grounds Oaks (G2) for 3-year-old fillies, and worth 100 points in the Road to the Kentucky Oaks. A short field of 5 contested this 1 1/16 mile test, with Untapable sent off as the 1-2 favorite off her win in the Rachel Alexandra Stakes (G3). In to challenge her included 2-1 second choice Unbridled Forever, winner of the Silverbulletday, and 7-2 third choice Fiftyshadesofgold, winner of the Two Altazano Stakes at Sam Houston.

Jockey Mike Smith sent Fiftyshadesofgold to the lead through fractions of 24.29, 48.27, and 1:12.83 while stalked by Untapable. On the turn, Untapable came out 3 wide to take over the lead and then powered away to win by 7 3/4 lengths in 1:43.09. It was another 1 3/4 lengths from Fiftyshadesofgold back to Unbridled Forever third. 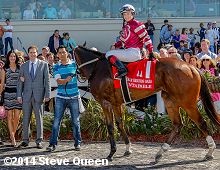 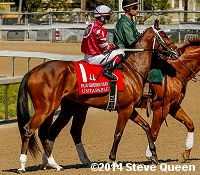 Left: Untapable in the winner's circle. Winning trainer Steve Asmussen said, "She just has ability. She has grown up a lot, and she has great composure and she's fast. I like how she was handled by Rosie, how she relaxed, and she ran big, especially off such a fast effort in the Rachel Alexandra."

Right: Untapable in the post parade. Jockey Rosie Napravnik said, "Steve's only instructions were to keep it smooth, so I let her go easily, and she relaxed for me, and I just got her used to being asked to go at the top of the stretch. Very excited about her." 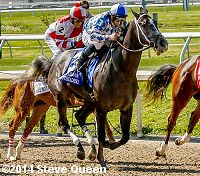 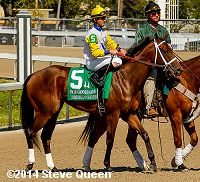 Left: Second place finisher Fiftyshadesofgold shortly after the start. Jockey Mike Smith said, "She ran great. She ran a very improved race. My horse will get a lot out of this. She was only second off the layoff, and she has room to improve. You might have seen the best filly in the world out there."

Right: Third place finisher Unbridled Forever returns after the race. Jockey Robby Albarado said, "We had a great trip. I pressed her onto even terms with Untapable, but that one is just a great filly. She wowed everyone last time and echoed it again today." Trainer Dallas Stewart added, "She was just a little tired today. It was a nice try, she was just outrun by a nice horse. We'll come back in five weeks and try her again."


The $400,000 Mervin H. Muniz Memorial Handicap (G2) featured a field of 5 older horses going about 1 1/8 miles on the turf. Last year's winner Amira's Prince was sent off as the 4-5 favorite off a third place finish in the Gulfstream Park Turf Handicap (G1), over 7-5 second choice Real Solution, unraced since ninth in the Breeders' Cup Turf (G1), and 7-1 third choice Skyring, second in the Fair Grounds Handicap (G3). 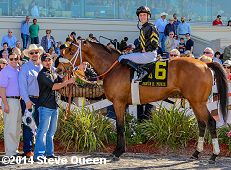 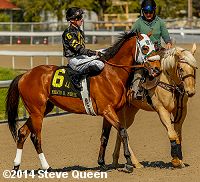 Left: Skyring in the winner's circle. Winning jockey Joe Rocco Jr. said, "When we turned for home and he switched leads for me, he kicked so hard I would have been surprised if anyone came and ran him down. I knew Mike's horse (Amira's Prince) was coming for me, but even though the stretch here is so long, I thought we were going to get there." 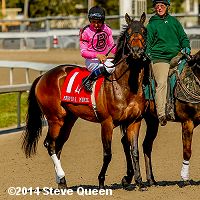 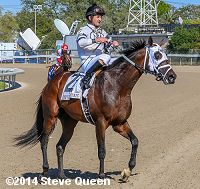 Left: Second place finisher Amira's Prince in the post parade. Jockey Mike Smith said, "I thought the horse to beat was behind us (Real Solution). I wanted to get off the rail, felt like it was not the place to be. The winner kicked on. I outsmarted myself a bit. If I could do it all over again I would have followed the horse up the rail and instead won by a head."

Right: Third place finisher Burn the Mortgage returns after the race. Jockey Robby Albarado said, "He ran great, and he tried hard to the wire. No excuses, but I sure wish I didn't have to be the one to try to keep the winner honest early."


The $400,000 New Orleans Handicap (G2) featured a field of 6 older horses going 1 1/8 miles on the main track. Normandy Invasion was sent off as the 11-10 favorite off an allowance win, his first start since fourth in the Kentucky Derby (G1), over 6-5 second choice Palace Malice, winner of the Gulfstream Park Handicap (G2), and 7-1 Bradester, winner of the Mineshaft Handicap (G3). 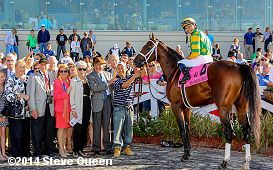 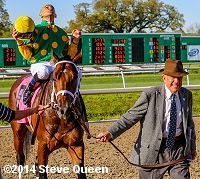 Left: Palace Malice in the winner's circle. Winning jockey Mike Smith said, "This horse holds a special place in my heart. I am just so happy that it worked out that I got to reunite with him and he didn't let us down. He might be better than he was last year. He did that pretty handily today." 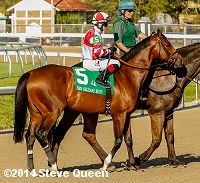 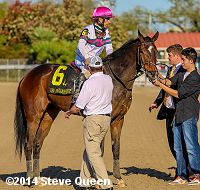 Left: Second place finisher Normandy Invasion in the post parade. Jockey Rosie Napravnik said, "It was a decent trip, and we were in a reasonable spot. Just second-best."

Right: Third place finisher Sunbean in the post parade. Jockey Richard Eramia said, "We had a good trip inside off the pace. We were beat by two good horses. The pace was honest but they were just better horses."