The $1 million Louisiana Derby (G2) is the highlight of the Fair Grounds meeting, and is the major local Kentucky Derby prep race and is worth 100 points to the winner in the Kentucky Derby Championship Series. A field of 9 three-year-olds went to post in this 1 1/8 mile test on Saturday afternoon, with International Star sent off as the 2-1 favorite off wins in the LeComte (G3) and the Risen Star (G2). In to challenge him included 5-2 second choice War Story, second in the same two preps, and 3-1 third choice Mr. Z, third in both the Smarty Jones and the Southwest (G3). 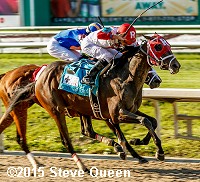 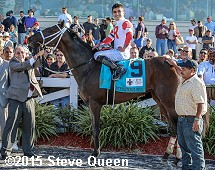 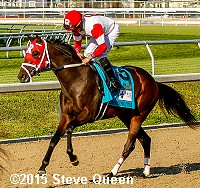 Left: International Star in the winner's circle being held by owner Ken Ramsey. Ramsey said, "That's back to back wins for us here in the Louisiana Derby and we swept all three this year. Next stop: Kentucky!" Trainer Mike Maker added, "I don't know why (International Star is so good at Fair Grounds), but I think I might take some of the dirt from Fair Grounds up to Kentucky with us. We will see how he comes out of the race and decide if we'll train him like we did before this. I haven't worked him until three weeks after his races."

Right: International Star returns after the race. Jockey Miguel Mena said, "We got another good trip and had a clean run. He was the best horse in the race again today and I thank the connections for giving me the chance to ride him." 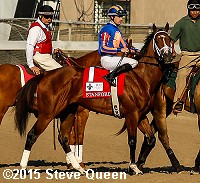 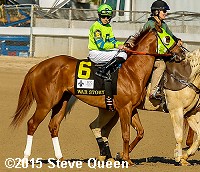 Left: Second place finisher Stanford in the post parade. Jockey Florent Geroux said, "We had a great start and I just let him go and relax. If someone wanted to go faster than me, I would have let them, but he was very nice and relaxed on the lead and put up reasonable fractions. They came to us a little bit earlier than I thought they would, but that's racing and that's why International Star was able to run me down. He gave me a good feeling. You have to give credit to winner; he's three-for-three and a very good horse."

Right: Third place finisher War Story in the post parade. Jockey Joe Talamo said, "I had a really had a good trip. He broke sharper than he normally does and he put me in a really good spot. Going down the backside I was absolutely loaded and in a pretty good spot while moving with him. I swung him out and he gave me a really good 1/16 to 1/8 mile run and then he just couldn't go on with the winner."


The distaff counterpart to the Louisiana Derby is the $400,000 Fair Grounds Oaks (G2) for 3-year-old fillies, and worth 100 points in the Kentucky Oaks Championship Series. A field of 8 contested this 1 1/16 mile test, with I'm a Chatterbox sent off as the 3-5 favorite off her win in t In to challenge her included 5-2 second choice Forever Unbridled and 6-1 third choice Shook Up.

26-1 Judni was quickest away through opening fractions of 23.69 and 47.03 while stalked by I'm a Chatterbox. On the far turn, the favorite came out 3 wide to take over the lead through 1 mile in 1:44.40. Kept to task by Florent Geroux, he drew off tp win by 2 1/2 lengths. It was another length back to Forever Unbridled third. 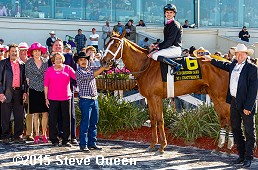 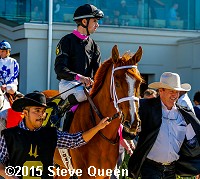 Left: I'm a Chatterbox in the winner's circle. Trainer Larry Jones said, "She is a really nice filly. We have been very blessed to get to race her. On to Kentucky is the plan."

Right: I'm a Chatterbox heads out to the track before the race. Jockey Florent Geroux said, "She was right where I wanted to be.She got a little bit bored in the final eighth of a mile but she kept running on." 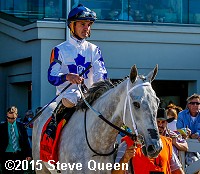 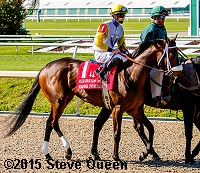 Left: Second place finisher Shook Up heads out to the track before the race. Jockey Robby Albarado said, "She left in order. Much more professional today. You've seen her previous races where she lugged in a bit. She was much better today and she stayed to the wire."

Right: Third place finisher Forever Unbridled in the post parade. The 5-2 second choice stalked the pace in third under Brian Hernandez Jr. but could not improve finishing third beaten 3 1/2 lengths. the Dallas Stewart trainee improved her record to 1 win, 2 seconds, and 3 thirds in 5 starts, earning $114,100 for owner-breeder Charles Fipke. 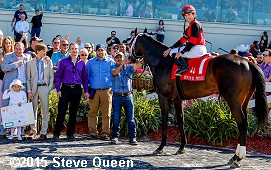 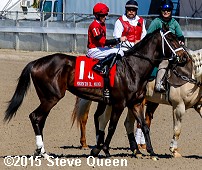 Left: Chocolate Ride in the winner's circle. Ricky Giannini, assistant to trainer Brad Cox said, "He has just been getting better every single day we've had him here. Being able to work him on the turf here has just pushed him to the next level. Working on the turf really helped his feet and his soundness and helped him in the right direction. He has been steadily improving – we saw it in the Fair Grounds Handicap and he showed it again today."

Right: Chocolate Ride in the post parade. Jockey Joe Talamo said, "I really appreciate the opportunity today. What a nice horse – he did everything so nice; relaxed on the front end and really held those two horses off. I had a lot of horse left." 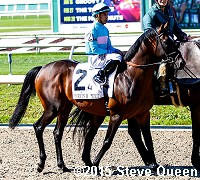 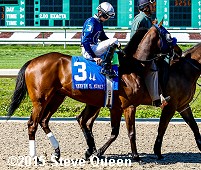 Left: Second place finisher and beaten favorite Slumber in the post parade. Jockey Alan Garcia said, "He ran a good race. I was a little disappointed the way he started from the gate. I had to ask him to put him in the race."

Right: Third place finisher Paroled in the post parade. Jockey Brian Hernandez Jr. said, "He ran a good race. I thought (Coalport) would go with (Chocolate Ride) and when he didn't go we were put in that spot. In these kinds of races you can't let a horse get around there easy, so we put the pressure on. My horse gave a good effort." 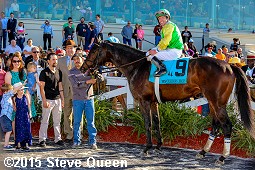 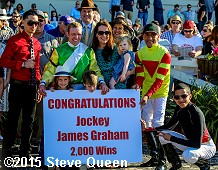 Left: Call Me George in the winner's circle. Trainer Grant Forster said, "He just keeps coming. That was just the epitome of a James Graham ride, giving 110 percent on every mount."

Right: This win was the 2000th career victory for jockey James Graham. He said, "Thanks to Grant for putting me on this horse. He's a good old horse, and he has tried so hard against very tough company." 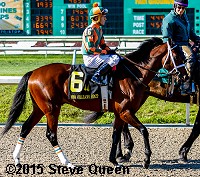 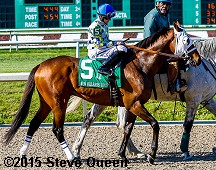 Left: Second place finisher Albano in the post parade. Jockey Kerwin Clark said, "He fought hard," Clark said of Albano. "When I finally got the lead inside the 70-yard pole, two jumps later, here comes (Call Me George). I think we'll have a good summer with him."

Right: Third place finisher and beaten favorite Moreno in the post parade. Jockey Joe Talamo said, "I was able to sit right off the speed, really the perfect trip. I had a lot of horse turning for home. During the stretch, he started looking around. I wish they would have come to me sooner, but he ran his race. He tried."