The biggest day of the Fair Grounds season is Louisiana Derby day, with five stakes races on the card. A crowd of 6,321 was on hand for the Louisiana Derby (G2), where a field of 8 Triple Crown hopefuls went to the gate in this 1 1/16 mile main track feature with a purse of $600,000. Circular Quay was sent off as the 8-5 favorite, despite finishing a well-beaten fifth as the favorite in the Risen Star last time out. He did have an excuse, having to avoid a fallen jockey, but he had not won a race since the Hopeful at Saratoga last September. Also in the field was 3-1 second choice Liquidity, shipping in from California after a close second in the Sham at Santa Anita last time out. Ketchikan was the 7-2 third choice, making his first start in stakes company after winning an allowance event by 3 lengths last time out.

Ketchikan broke well and went to the front early, setting quick fractions of 23.61, 46.53, and 1:10.88 while 1 1/2 lengths clear of Liquidity who stalked him the whole way around. Jockey John Velazquez kept Circular Quay unhurried near the back of the pack early, staying off the rail and out of traffic trouble. Entering the stretch, Ketchikan was still running well while Liquidity began to fade from contention, as Circular Quay was making his four-wide move around the turn. Through the lane, Circular Quay continued to close on the pacesetter, collaring Ketchikan at the 1/16 pole and drawing clear to win by 2 1/4 lengths in 1:43.01. It was a long 3 lengths back from Ketchikan to late-closing 8-1 shot Zanjero in third. Liquidity finished a disappointing sixth. 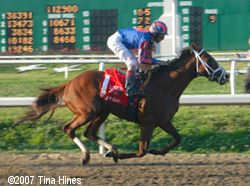 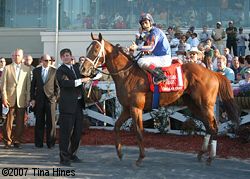 Circular Quay in the winner's circle after the Louisiana Derby. Winning trainer Todd Pletcher said, "He didn't redeem himself as much as the fact that he got a good trip today. He was probably the best horse last time (in the Risen Star); thank goodness he came out of it in one piece. Today, this was his natural running style, to run in the back of the pack and come with a late run. Early speed helps. We'll see what's next, possibly the Wood Memorial. I think he's shown from Day 1 that he's among the best of his generation. He's never disappointed us." 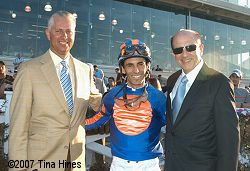 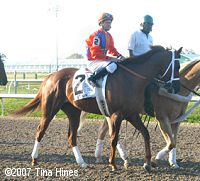 Second place finisher Ketchikan in the post parade. His trainer Al Stall Jr. said, "He ran off down the backstretch (half in 46.53). He must have gotten a little cranked up. I'm a little disappointed. He's been beautiful. The talent's there - we've just got to re-direct it." Jockey Larry Melancon added, "We had no plan to the first turn. I just wanted to get him to relax, but he was pulling me to the lead, so I let him go. It took one of the best 3-year-olds in the country to run us down." 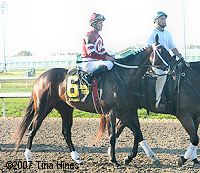 Third place finisher Zanjero in the post parade. His jockey Garrett Gomez said, "He did some positive things today. He just wasn't good enough to beat the winner. But I think he'll bring his game in some future races."


The $400,000 Fair Grounds Oaks (G2) saw eight 3-year-old fillies also go 1 1/16 miles on the main track. Octave was sent off as the 6-5 favorite in her 2007 debut, having not raced since her runner-up finish in the Breeders' Cup Juvenile Fillies. Silverbulletday Stakes runaway winner Appealing Zophie was sent off as the 5-2 second choice.

7-1 Mistical Plan set the pace off the rail through fractions of 23.57, 46.99, and 1:11.51, while Appealing Zophie stalked her most of the way around. Favorite Octave sat back in seventh early, saving ground around the clubhouse turn after veering inward at the break. Entering the stretch, Mistical Plan shook off Appealing Zophie who then gave way and faded to last, while Octave was just hitting her best stride splitting horses on the turn to put in her rally. However, Mistical Plan drew off to a 4 length advantage at the 1/8 pole, leaving Octave with too much ground to make up late. Mistical Plan finished the trip in 1:44.02, 3 1/4 lengths ahead of Octave in second. It was another 3 1/4 lengths back to 17-1 Whatdreamsrmadeof in third. 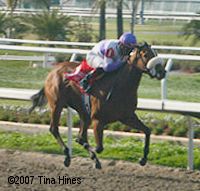 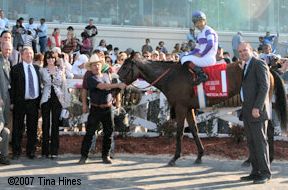 Mistical Plan in the winner's circle with trainer Doug O'Neill on the right. O'Neill said, "Beautiful. You always love the rail. The last two times going two turns, we didn't draw the greatest of posts and she got hung out wide. "The fractions seemed very quick. That worried me, but she's a filly you can't take back on. Corey just rode her beautifully." 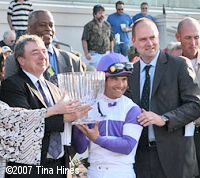 Trophy presentation with owner J. Paul Reddam, jockey Corey Nakatani, and trainer Doug O'Neill. Nakatani said, "She's been a handful before. Today, I just let her run her best race. What more can you say about Doug O'Neill and young horses, and Mr. Reddam putting up the money to get these good horses? She was getting some pressure (from Appealing Zophie), but my main goal was to let her be comfortable. We were loaded for bear. She's run some clunkers going two turns, but we're not done yet." 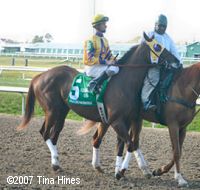 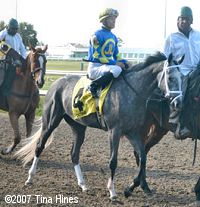 Left: Second place finisher and beaten favorite Octave in the post parade. Her jockey Garrett Gomez said, "She ran a really good race. Unfortunately, I got caught in a little bit of traffic, and by the time I got clear, the 1 horse (Mistical Plan) was gone. She'd been off a long time (since the Breeders' Cup) and she finished well. We'll move forward off of this. There are bright things in her future."