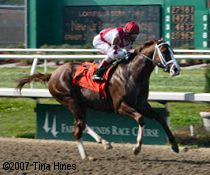 Before the running of the Louisiana Derby and the Fair Grounds Oaks for 3-year-olds, there are three other stakes races on the card featuring the older horses. The $500,000 New Orleans Handicap (G2) saw a field of six older horses go 1 1/8 miles on the main track. Master Command was sent off as the 3-10 favorite off his 6 length victory in the Mineshaft Handicap over the same track.

10-1 Good and Lucky set a slow early pace of 25.05, 48.86, and 1:12.75 while favorite Master Command sat just a length off the pace in second, 3 lengths clear of the rest of the field. Turning for home, jockey John Velazquez asked Master Command for run and got it, as the favorite powered ahead at the 3/16 pole and pulled away to a 3 1/2 length victory over late-running 5-1 Patriot Act in a time of 1:49.89. It was just a head back to 7-1 Smokeyjonessutton in third, while pacesetter Good and Lucky faded to fourth. 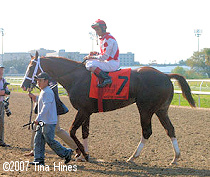 Master Command heads for the winner's circle after the race. Winning trainer Todd Pletcher said, "We felt like we'd be close. He's a big colt, by A.P. Indy, so we had him as a 2-year-old, but everything finally started to come together. A.P. Indy's usually get better as they get older. Obviously, (Master Command) is at his best at a mile and an eighth." 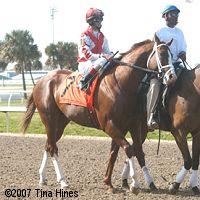 Master Command in the post parade. Jockey John Velazquez said, "I let the other horse (Good and Lucky) go for a while. It was just me and him. The first quarter was pretty comfortable. He grabbed a hold of the track right out of the gate. Not much else you can say - it was pretty easy." 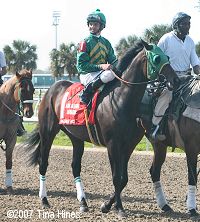 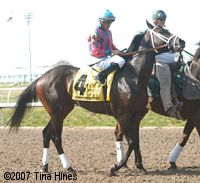 Left: Second place finisher Patriot Act in the post parade. His trainer Neil Howard said, "He ran good. Obviously, the winner is a hell of a nice horse." Jockey Robby Albarado added, "He ran well. He just got outrun today."


The $500,000 Mervyn Muniz Jr. Memorial Handicap (G2) saw a field of eleven go "about" 1 1/8 miles on the turf course. San Gabriel Handicap winner King's Drama shipped in from California for trainer Bobby Frankel and was sent off as the 2-1 favorite over 7-2 second choice and Florida shipper Einstein, who was a close third in the Gulfstream Park Breeders' Cup Handicap last time out.

65-1 outsider Transduction Gold battled for the lead with 9-1 Sweet Return through fractions of 23.70, 47.92, and 1:11.32 over the firm course, while King's Drama stalked the pace in third. Midway down the backstretch, jockey Edgar Prado pulled King's Drama up, sensing a mis-step. Transduction Gold held the lead into the stretch, but Einstein, who had raced back in sixth early, was closing well having been wide throughout. Einstein took over the lead inside the 1/8 pole and was all-out to hold off the late-running 22-1 Cloudy's Knight to prevail by 1/2 a length in a time of 1:49.57. It was another 1 1/2 lengths back to Naissance Royale in third. 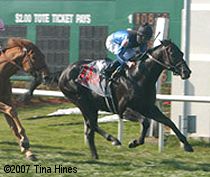 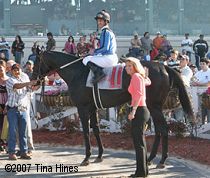 Einstein in the winner's circle with trainer Helen Pitts on the right. Pitts said, "He's had no luck with post positions (drawing outside last 3 starts), but fortunately, he overcame that today. He's a star. We knew he would be a little wide on the first turn, and he was. Robby wanted to save him for the last 1/8, and when he turned for home, he responded. He loves the game; he loves to run. He gives it everything he has. That's the kind of horse he is. He'll run at horses, or he won't let one go by him. With a horse like this, we've got the best of both worlds. We'll probably give him a rest until the Woodford Reserve." Jockey Robby Albarado added, "I watched his races on tape this morning. I really didn't know much about the horse. I was behind King's Drama when he (pulled up); I don't know what happened. He's a really nice horse; when I asked him, he responded. He felt (Cloudy's Knight) coming to him, and he re-broke." 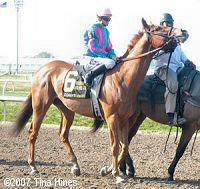 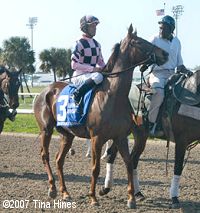 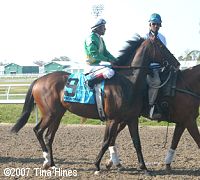 Beaten favorite King's Drama was pulled up on the backstretch. His jockey Edgar Prado said, "He took a couple of bad steps on the backstretch and didn't feel right. Hopefully it's nothing major. It doesn't seem like anything's broken." 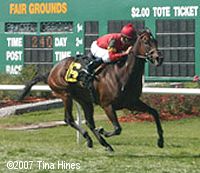 Kicking off the stakes action on Louisiana Derby day was the $100,000 Bienville Stakes for older fillies and mares sprinting "about" 5 1/2 furlongs on the turf. 7-5 favorite Smitty's Sunshine dueled for the lead with 58-1 longest shot Miss Penny Fortune the whole way, through fast fractions of 21.60 and 44.39. Through the stretch, Smitty's Sunshine shook off Miss Penny Fortune to win by 3 lengths in 1:02.92., just 0.02 seconds off the course record. Miss Penny Fortune was clearly the best of the rest, finishing second, 2 1/2 lengths clear of 5-2 second choice Somethinaboutbetty in third.

Winning trainer Morris Nicks said, "She's easy to train. She really is. They tried her, the 7 (Miss Penny Fortune) ran a real nice race, but I think it helps her out when they challenge her like that. I think it just pumps her up." Jockey Robby Albarado added, "I knew she was going that fast. That's her deal. She puts 'em away early. If she slows it up, she can outsprint them from the eighth pole. And the good thing is, she negotiates these turns so well."