The $1 million Louisiana Derby (G2) is the highlight of the Fair Grounds meeting, and is the major local Kentucky Derby prep race, worth 100 points to the winner in the Kentucky Derby Championship Series. Conditions were excellent in New Orleans with cloudy skies and temperatures in the high 70's A field of 10 three-year-olds went to post in this 1 1/8 mile test on Saturday afternoon, with LeComte (G3) winner and Risen Star (G2) third place finisher Mo Tom sent off as the lukewarm 2-1 favorite. In to challenge him included 3-1 second choice Greenpointcrusader, winner of the Champagne (G1) before 7th in the Breeders' Cup Juvenile (G1) and 2nd in the Holy Bull (G2), and 7-2 third choice Gun Runner, winner of the Risen Star. 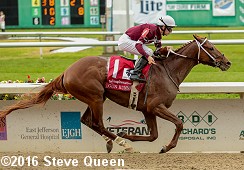 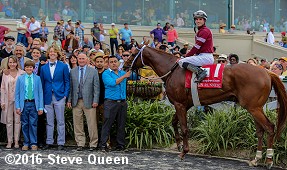 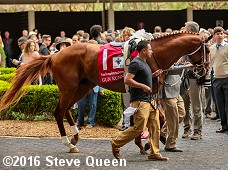 Left: Gun Runner in the winner's circle. Winning trainer Steve Asmussen said, "We're so fortunate and thankful for the Winchells for the opportunity to train this horse and we really look forward to his next race. He's very talented. (The Kentucky Derby) is what we're all dreaming about."

Right: Gun Runner in the paddock before the race. Winning jockey Florent Geroux said, "The good thing is he's very easy to manage. He is so easy to manage and has so many gears. He settles really nicely and when you ask him to go he has a nice turn of foot. It's great (to have a Derby horse). I was in the Derby last year (with Stanford), but my horse was scratched. Hopefully we can make a nice run the first Saturday in May." 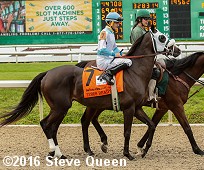 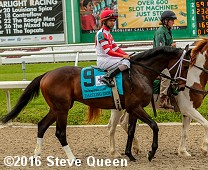 Left: Second place finisher Tom's Ready in the post parade. Trainer Dallas Stewart said, "He stepped up big today coming out of a bad race. He trained very well between last race and this race. He was still a little bit eager early so we have some work to do there, but he ran a great race." Jockey Brian Hernandez Jr. added, "We had a great trip. Our horse settled and got through on the inside. We couldn't run down the winner. He was just better than us today but we'll tackle him again in Louisville."

Right: Third place finisher Dazzling Gem in the post parade. Trainer Brad Cox said, "Big effort. Really pleased with him. He was a beat horse at the top of the lane, but he showed a lot of fight after getting bounced around a bit. He's obviously an inexperienced horse. In three weeks, we'll look at the Arkansas Derby, but we'll let him tell us. He's a nice big long-striding colt. A mile and a quarter shouldn't be an issue." 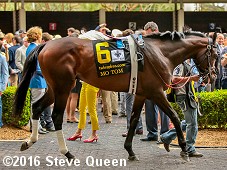 Fourth place finisher and beaten favorite Mo Tom in the paddock. Trainer Tom Amoss said, "It was a good race, but the pace didn't set up the same this time. I really thought he ran a prepared race and a great race, I was just puzzled as to why Corey went down to the rail. I just hope he didn't hurt my horse. I am surprised. There were other choices and I don't understand why he did what he did. Watching this was like going to the schoolyard and watching your kid get beat up by another kid. It's so hard to watch something like that with all the preparation we do. We will make sure he's okay before we make any other decisions."


The distaff counterpart to the Louisiana Derby is the $400,000 Fair Grounds Oaks (G2) for 3-year-old fillies, and worth 100 points in the Kentucky Oaks Championship Series. A field of 8 contested this 1 1/16 mile test, with Breeders' Cup Juvenile Fillies (G1) 7th place finisher Land Over Sea sent off as the 9-5 favorite after finishing second in the Las Virgines (G2) and Santa Ysabel (G3). In to challenge her included 3-1 second choice Stageplay, winner of the Silverbulletday but 5th in the Rachel Alexandra (G2), and 4-1 third choice Adore, an allowance winner last out and making her stakes debut. 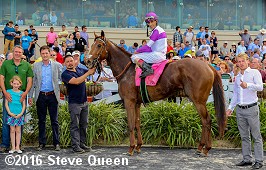 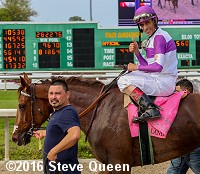 Left: Land Over Sea in the winner's circle. Winning trainer Doug O'Neill said, "It went great. She ran so well. I loved where she was all the way around. It did look like Adore wasn't going to give up the lead, so I got a little worried for a second that we were going to run second again to a nice filly. Johnny kept after her and Land Over Sea loved the long stretch and really took advantage of it. There was no quit in her. So grateful to the Reddams for giving me this filly and the opportunity."

Right: Land Over Sea returns after the race. Winning jockey John Velazquez said, "I was on the outside and I didn't want to come out of there rushing. She broke a little slow anyway, so I took advantage of that and saved some ground on the first turn. On the backstretch a horse was backing up, so I went around that one and then by the three-eighths I was sitting third and from there it was all her. When I came down the lane, she switched leads and showed the quality she is and what she was chasing out in California (Songbird)." 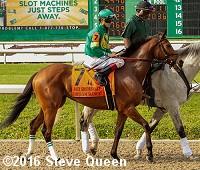 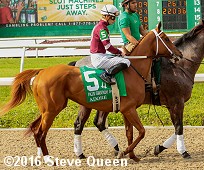 Left: Second place finisher Dream Dance in the post parade. Jockey Brian Hernandez Jr. said, "She ran great. The race kind of fell apart like the last one and she has a great kick. We were on the fence the whole way. We had a little traffic trouble, but came running. It's encouraging for her to run this big."

Right: Third place finisher Adore in the post parade. Jockey Javier Castellano said, "I liked the way she ran today. She rated behind the horse in the lead, and the winner was much the best today."


The $300,000 Mervin H. Muniz Jr. Memorial Handicap (G2) featured a field of 10 older horses going about 1 1/8 miles on the turf. Last year's winner Chocolate Ride was the 2-1 favorite off his wins in the Colonel E.R. Bradley Handicap (G3) Fair Grounds Handicap (G3) over 3-1 World Approval, an allowance winner after 4th in the Hill Prince (G3), and 7-2 Roman Approval, second behind Chocolate Ride in both the Fair Grounds Handicap and Colonel E.R. Bradley Handicap. 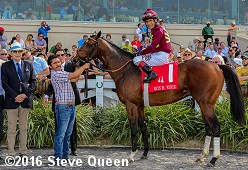 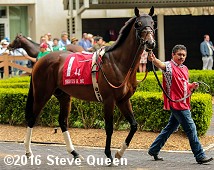 Left: Take The Stand in the winner's circle with owner Earl I. Mack onthe far left. Rudolphe Brisset, assistant to trainer Bill Mott said, "We were not really expecting to be on the lead today because there was a lot of speed on paper, but the horse took him (Edgar Prado) there again, same as in Tampa, and he just took off at the quarter pole and was very impressive today."

Right: Take The Stand in the paddock before the race. Winning jockey Edgar Prado said, "He loved the lead last time and was happy. Unfortunately we got beat then. He was running every step of the way today and drew off in the stretch. The first quarter we were going pretty easy. We picked it up in the second quarter and he was doing it so easy. When they tried to come close to me, my horse just leveled off again." 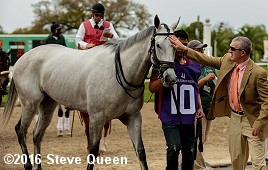 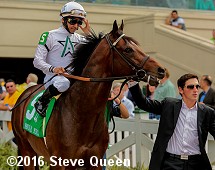 Left: Second place finisher World Approval gets a pat on the way to the paddock. Jockey Julien Leparoux said, "We got the outside post so that didn't help us. The winner was on the lead and got loose from us, but my horse ran a big race."

Right: Third place finisher Closing Bell heads out to the track before the race. Jockey Jose Lezcano said, "I had kind of a rough trip. He broke good, but I didn't want to be on the pace. I had room, I just think that he's kind of one-paced. The way the turf was playing, I think maybe you have to be kind of up close." 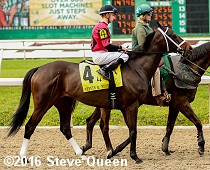 Fourth place finisher and beaten favorite Chocolate Ride in the post parade. Jockey Florent Geroux said, "Great trip. I thought I was perfect where I was on the first turn. I was sitting right behind the pace. I tried to challenge the two horses in front of me at the half-mile pole, but I only passed one. The other kept running. He went fast."

11-1 Coup de Grace was quickest away through fractions of 23.65, 47.67, and 1:12.07 while stalked by 20-1 S'maverlous and 13-1 Jessica's Star. At the top of the stretch S'maverlous swept to the lead getting 1 mile in 1:37.09, and drew off to win by 2 lengths over Jessica's Star in 1:50.06. It was 1/2 a length back to late-running International Star third. After a stewards' inquiry into the stretch run Jessica's Star was disqualified from 2nd to 5th for interference, moving International Star to second and Eagle to third. 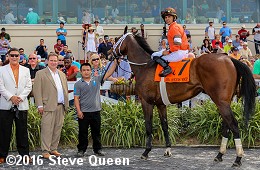 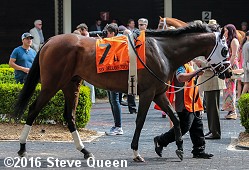 Left: S'maverlous in the winner's circle. Winning trainer Mike Maker said, "No complaints from me. I got him last fall at Belmont. He's bred for the distance. You take horses who are doing well, you hope they can run the way he did. We rolled the dice and it paid off."

Right: S'maverlous in the paddock. Winning jockey Jose Lezcano said, "He broke very good. He took me there and then went on and won the race. He was very good today. I stuck with (Coup de Grace) and my horse was very comfortable and I had plenty all the way around." 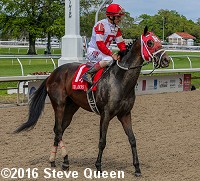 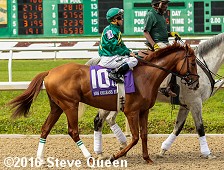 Left: Second place finisher (via disqualification) International Star returns afte the race. Jockey John Velazquez said, "I thought I had a perfect trip. I was in a straight line and the horse on the inside came out. The winner was gone. I thought the horse would come back to me, but when I got to the quarter pole, I just didn't have it. "

Right: Third place finisher (via disqualification) and beaten favorite Eagle in the back of the pack shortly after the start. Jockey Javier Castellano said, "I didn't expect to be so far back, but we had a tough post. When we loaded, I didn't have a chance to get my horse ready and he sat in the gate. I had to come from behind and thought the pace might be quicker, but I'm not disappointed, he still finished." 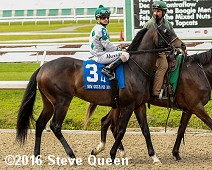 Jessica's Star, who was second across the line but was disqualified to fifth, in the post parade. Jockey Mitchell Murrill said of the DQ, "The middle horse didn't have much to get in there and stay in there, and the outside horse came down toward me and then maybe I took a half step out, but I don't think it was enough to cause any kind of inquiry. Perfect trip, got to sit just off the pace like I wanted to. I had plenty of horse all the way around and when the running started, he was game and ran to his best potential, he just wasn't quite good enough to outrun the winner." 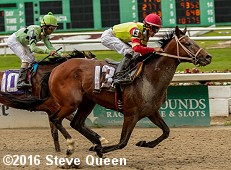 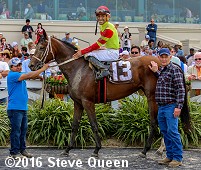 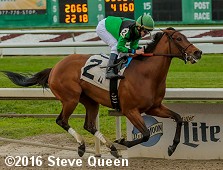 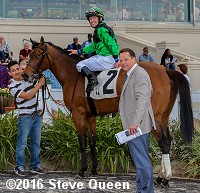 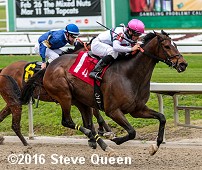 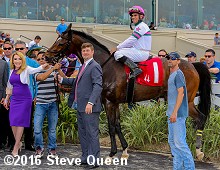 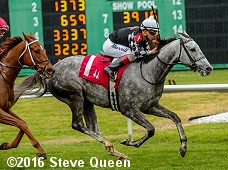 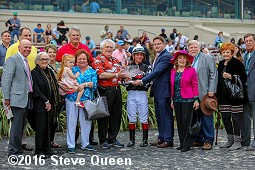 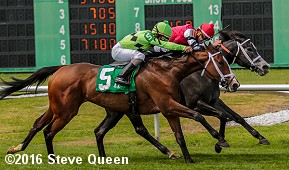 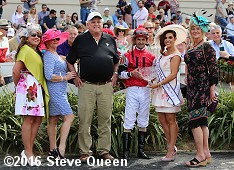