The $1 million TwinSpires Louisiana Derby (G2) is the highlight of the Fair Grounds meeting, and is the major local Kentucky Derby prep race, worth 100 points to the winner as part of the Kentucky Derby Championship Series. Conditions were excellent in New Orleans with sunny skies and temperatures in the low 80's A field of 9 three-year-olds went to post in this 1 1/8 mile test on Saturday afternoon, with Risen Star (G2) winner Girvin sent off as the 6-5 favorite. In to challenge him included 7-2 second choice Guest Suite, winner of the LeComte (G3) but 4th in the Risen Star (G2), and 4-1 third choice Patch, a maiden winner at 2nd asking at Gulfstream.

Jockey James Graham sent 98-1 longest shot Hotfoot to the lead first time by through fractions of 23.46 and 47.00 while pressed by 17-1 Monaco and stalked by 9-2 fourth choice Local Hero. On the far turn Hotfoot tired as Local Hero moved up to gain the front through 3/4 in 1:11.15. Entering the lane, favorite Girvin, 4th early under Brian Hernandez Jr., moved up 4 wide to take over through 1 mile in 1:36.80. Kept to task by Hernandez, Girvin drew off to win by 1 1/4 lengths over late-running Patch in 1:49.77 over the fast main track. It wss another 1 3/4 lengths back to Local Hero third. 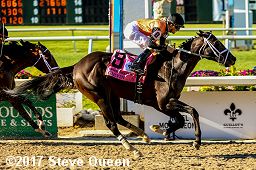 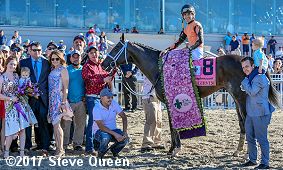 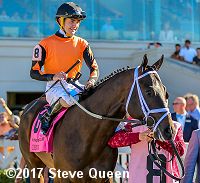 Left: Girvin in the winner's circle. Winning jockey Brian Hernandez Jr. said, "He's such a talented horse. He puts a lot of confidence in you. Today my biggest thing was when I saw Local Hero settle as well as he did, I wanted to stay behind (him) and give myself a target. Every time I needed him he was there for me. Turning for home, he got to switching leads back and forth, but he was kind of just messing around."

Right: Girvin heads out to the track before the race. Winning trainer Joe Sharp said, "It doesn't feel bad [to have a Kentucky Derby horse]. He's a talented horse. We're enjoying the ride. It's great connections and a great owner and it has been a real team effort." 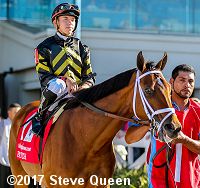 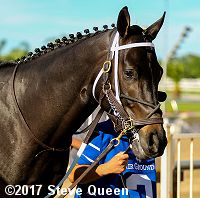 Left: Second place finisher Patch heads out for the post parade. Jockey Tyler Gaffalione said, "We had a great trip. He's still young and learning, but today he really ran a big race. There was a lot of traffic out there. Once we dove inside and found a path, he really accelerated and finished up really good. He's pretty handy and you can do whatever you want with him. He listens very well."

Right: Third place finisher Local Hero heads in to the paddock before the race. Jockey Florent Geroux said, "I had a great trip and we had a good pace in front. He was nice and relaxed and Steve and his team did a great job getting him ready for today. He was a different horse today than last time he ran. I was in position to win the race and they just outran me at the end."


The distaff counterpart to the Louisiana Derby is the $400,000 TwinSpires Fair Grounds Oaks (G2) for 3-year-old fillies, and worth 100 points to the winner as part of the Kentucky Oaks Championship Series. A field of 6 contested this 1 1/16 mile test, with Silverbulletday and Rachel Alexandra (G2) winner Farrell sent off as the 2-5 favorite over 7-2 Vexatious, 3rd in an allowance at Santa Anita, and 7-1 Daria's Angel, a maiden winner at 3rd asking.

Jockey Robby Albarado sent Daria's Angel to the lead first time by and she set fractions of 24.09, 47.55, and 1:12.09 while pressed by Vexatious and stalked by Farrell. Entering the stretch, jockey Channing Hill sent Farrell, 4 wide around both turns, to the front and she quickly opened up by 3 lengths through 1 mile in 1:36.98. Under a handride Farrell cruised to a 3 1/4 length win over late-running 14-1 Wicked Lick in 1:43.67. It was a nose back to Vexatious third. 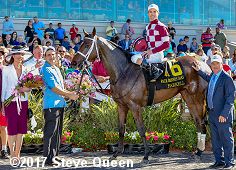 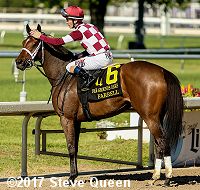 Left: Farrell in the winner's circle. Winning trainer Wayne Catalano said, "We feel very good [heading to the Kentucky Oaks]. She's doing everything we've asked her to do, and she's coming around and she's maturing. The way she's settling down, she's really learning."

Right: Farrell returns after the race. Winning jockey Channing Hill said, "Wayne and the barn have done a great job with a really good filly. She's terrific and just keeps getting better and better. She settled extremely well today. I didn't ask her until we left the 1/8 pole, and I still had a ton of horse." 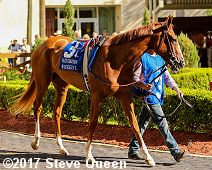 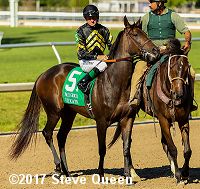 Left: Second place finisher Wicked Lick in the paddock. Jockey Brian Hernandez Jr. said, "She keeps staying and the good thing is she keeps getting better and better. She keeps answering the question and each race she just steps it up more and more. She's a great filly to ride because she just grinds it out and she wants to do her job, which makes it nice." Trainer Brendan Walsh added, "She ran great, she saved ground and she always shows up. It looks like ‘why not' as far as the Oaks. She's a good filly."

Right: Third place finisher Vexatious in the post parade. Jockey Kent Desormeaux said, "She stuck her neck out there and tried to be second. I was proud of her. I thought she had everything her way and she responded. It was a beautiful trip and she's getting faster. She's a little keen, but not out of control and should improve."

Jockey Richard Eramia sent 87-1 longest shot Sky Flight to the front first time by and he set fractions of 23.77, 48.27, and 1.11.90 over the firm going while pressed by 18-1 One Mean Man and stalked by 15-1 Roman Approval. On the far turn Sky Flight faded badly as Oscar Nominated, 4th early, moved up to lead through 1 mile in 1:36.46. 6-1 fourth choice Enterprising, 6th early under Tyler Gaffalione, rallied and outfinished late-closing favorite Kasaqui to win by a neck in 1:48.41. It was just a nose back to Oscar Nominated third. 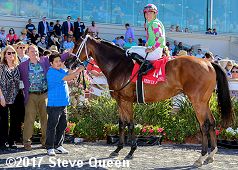 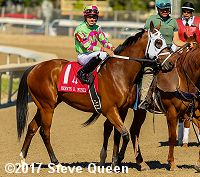 Left: Enterprising in the winner's circle. Winning jockey Tyler Gaffalione said, "We saved all the ground and when we came into the stretch, the rail opened and my horse hit the hole running." 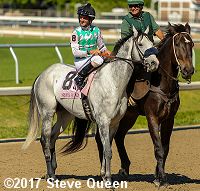 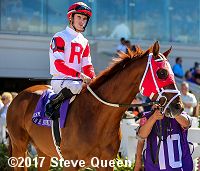 Left: Second place finisher and beaten favorite Kasaqui in the post parade. Jockey Robby Albarado said, "I had a great trip. I saved ground on both turns. I came out turning for home and he ran hard. I can't take anything away from the winner."

Right: Third place finisher Oscar Nominated heads out to the track before the race.


The $400,000 New Orleans Handicap (G2) featured a field of 9 older horses going 1 1/8 miles on the main track. Pegasus World Cup (G1) sixth place finisher Noble Bird was the 9-5 favorite over 4-1 Breaking Lucky, 8th in the Pegasus after finishing 2nd in the Clark Handicap (G1) and 11-2 International Star, second in the Mineshaft Handicap (G1) and the 2015 Louisiana Derby winner.

Breaking Lucky was quickest away under Luis Contreras through fractions of 23.50, 46.63, and 1:10.35 while pressed by 9-1 Iron Fist and stalked by 86-1 Aglimpseofgabby. Entering the lane Breaking Lucky opened up a 3 length lead through 1 mile in 1:35.22. However, 8-1 Honorable Duty, 5th early under James Graham, came out for room and rallied to catch the pacesetter for the neck victory in 1:48.35. It was another 5 lengths back to Iron Fist third, while favorite Noble Bird checked in 6th. 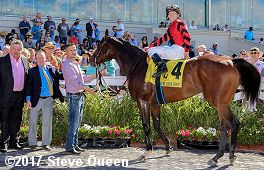 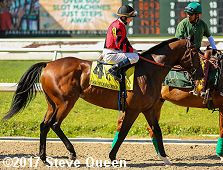 Left: Honorable Duty in the winner's circle. Winning jockey James Graham said, "He's getting better and better with every start. His work last week was unbelievable and that's the way he ran today, just came home real strong. When I picked him up and asked him to go, he ran hard all the way to the wire."

Right: Honorable Duty in the post parade. Winning jockey Brendan Walsh said, "[Gelding him before the Tenacious] really helped. He got to the point where his mind was getting the better of him and he wasn't going to advance without doing that and so we did it and he's done nothing wrong since." 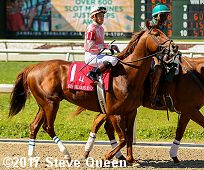 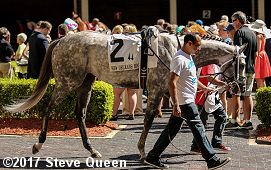 Left: Second place finisher breaking Lucky in the post parade. Jockey Luis Contreras said, "I was watching the races from earlier and it's been all speed. He broke good, so I gave him a chance to run and once I was on the lead, he relaxed for me the whole way. Even with (Iron Fist) on the outside, he was relaxed. I waited, because of the long stretch, until past the 1/4 pole to ask him and he went again. It was in the last 1/16 that (Honorable Duty) was really coming and got me in the last jump."

Right: Third place finisher Iron Fist in the paddock. Jockey David Flores said, "I was content with the trip. He broke and I just stayed out of his way. I just wanted to let him be comfortable, and he was, we just ran out of horse the last 1/4 mile." 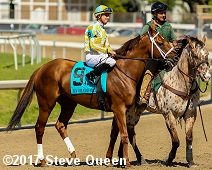 Sixth place finisher and beaten favorite Noble Bird in the post parade. Jockey Florent Geroux said, "Sometimes he can get rank, but I had a lovely trip. I tipped him out at the 1/2 mile pole to give him a chance and he didn't go on." 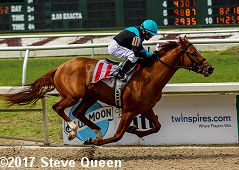 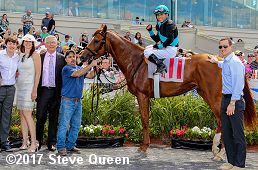 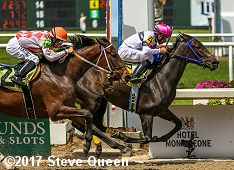 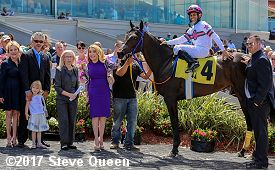 Winning jockey Richard Eramia said, "She broke really sharp. We went a little quick, but she did it by herself. I was waiting, and I was a little worried down the stretch. She backed up a little bit the last sixteenth but we still had the best horse."