Fair Grounds Race Course hosted 4 graded stakes races on Saturday afternoon for Louisiana Derby Preview Day, including one of the major Triple Crown prep races: the $400,000 Risen Star Stakes (G2), the major local prep for the Louisiana Derby and worth 50 points to the winner as part of the Kentucky Derby Championship Series. Conditions were excellent at the historic New Orleans track, with clear skies and temperatures in the high 60's. A field of 11 three-year-olds went to post in this 1 1/16 mile main track feature, with Mo Town sent off as the 3-2 favorite, winner of 2 straight including the Remsen (G2) last out at Aqueduct. In to challenge him included 3-1 second choice Local Hero, off his maiden win at third asking, and 7-2 third choice Guest Suite, winner of the LeComte (G3). 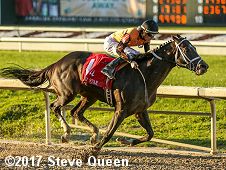 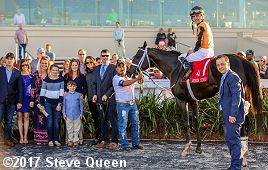 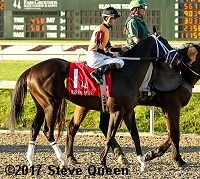 Left: Girvin in the winner's circle. Winning trainer Joe Sharp said, "We believed in the horse all along. I lost my voice (from cheering) and we're in shock and very excited. He will stay here and probably run in the Louisiana Derby. We'll let him tell us, but that's my inclination."

Right: Girvin in the post parade. Winning jockey Brian Hernandez Jr. said, "The horse did the job for us. You have to give him the credit. He put us in a good spot the whole way and traveled like a true professional. For a horse to come out and do what he did today in just his third start, that shows what kind of special animal he truly is." 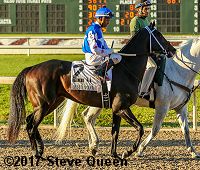 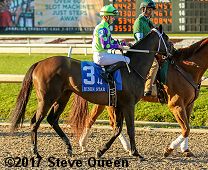 Left: Second place finisher Untrapped in the post parade. Jockey Ricardo Santana Jr. said, "He had no excuse. He ran his race and he ran hard and maybe got a little tired. He was running long for only the second time and I was proud of how he ran."

Right: Third place finisher Local Hero in the post parade. Jockey Florent Geroux said, "He was a little more keen than I thought he would be. He's still a little bit immature, but he can move forward from this race. Last time he won so easily, I'm not sure he got too much out of it." 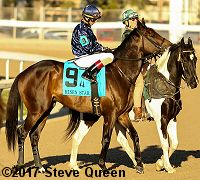 Left: Fifth place finisher and beaten favorite Mo Town in the post parade. Trainer Tony Dutrow said, "I thought (Mo Town) broke well and got himself into position and just wasn't able to maintain it. Johnny (Velazquez said) that the horse was struggling over the surface and never got ahold of it. He felt strongly that it was a surface Mo Town didn't care for. So, we will see if he was right or not. No disrespect to Fair Grounds' surface – it's one of the reasons we came – it just didn't work out for him today."

Right: The entire field shortly after the start of the Risen Star. Neil Howard, trainer of fourth place finisher Guest Suite said, "I thought he ran well. You can't win every one."


The distaff counterpart to the Risen Star is the $200,000 Rachel Alexandra Stakes (G3) for 3-year-old fillies also going 1 1/16 miles on the main track, worth 50 points to the winner as part of the Kentucky Oaks Championship Series. Delta Downs Princess (G3) winner Shane's Girlfriend was sent off as the 7-5 favorite in the field of 7 off her 3rd place finish in the Santa Ynez (G2) at Santa Anita. In to challenge her included 3-2 second choice Valadorna, second in the Breeders' Cup Juvenile Fillies (G1) before winning an allowance at Fair Grounds, and 7-2 third choice Farrell, winner of the Golden Rod (G2) and Silverbulletday. 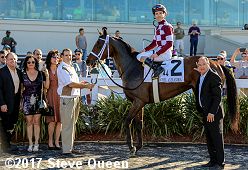 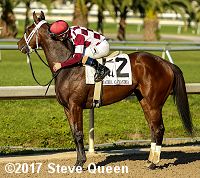 Left: Farrell in the winner's circle. Winning trainer Wayne Catalano said, "The way she's running she should be one of the top choices (in the Kentucky Oaks), but there are a few more races to go. She was moving pretty good and I was happy when (Hill) said that she settled for him on the backside. Speed is always dangerous and pace makes the races and today was our race."

Right: Farrell gets a hug when she returns after the race. Winning jockey Channing Hill said, "She's really versatile, so I just let her have her way. She did everything so well and settled really well on the backside, doing it all on her own. Down the lane I got after her a little bit and she went on with it and did it professionally. This filly is the real deal." 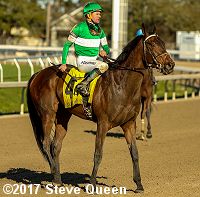 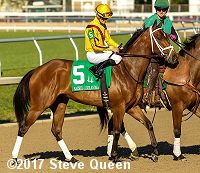 Right: Second place finisher Majestic Quality returns after the race. Jockey Kent Desormeaux said, "She works like she belongs here and today she proved it. That made the whole trip. Mission accomplished: she's graded-placed. I liked her determination. All the way to the sixteenth she was third, but she fought like hell and got second."

Left: Third place finisher Valadorna in the post parade. Jockey Julien Leparoux said, "We had a good trip. She traveled good, nice and relaxed and made a move around the second turn pretty easily. When I got to the winner, that one re-broke. No excuses." Trainer Mark Casse added, "I thought we had a good trip and thought she ran well. She just flattened out late and got beat by a good horse."


A field of 7 older horses contested the $125,000 Mineshaft Handicap (G3) over 1 1/16 miles on the main track. Allowance winner December Seven was sent off as the 3-1 favorite over 33-10 second choice Mo Tom, 5th in the Super Derby (G3) last out at Louisiana Downs, and 7-2 third choice Eagle, unraced since finishing 4th in the Suburban (G2) last June at Belmont. 10-1 Rise Up was loose on the lead through fractions of 23.69 and 46.79 while stalked by December Seven and 5-1 Honorable Duty. On the far turn Rise Up tired as 9-2 fourth choice Dazzling Gem gained a short lead through 3/4 in 1:11.50. In the lane, Honorable Duty gained the lead 5 wide through 1 mile in 1:36.27. Kept to task by jockey Julien Leparoux, Honorable Duty outfinished 9-1 International Star by 1/2 a length to win in 1:43.03. It was a nose back to Dazzling Gem third while December Seven faded to 5th. 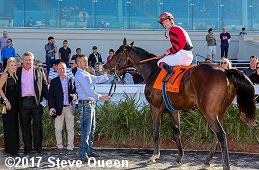 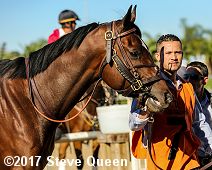 Left: Honorable Duty in the winner's circle. Winning trainer Brendan Walsh said, "He ran like we thought he would and he had been training so well ever since we gelded him. I think he's a very good horse who is improving. He idled a little bit in the front, but it was the first time he had passed horses so early in the race, but he ran great and I expected that he wouldn't let us down."

Right: Honorable Duty walks over before the race. Winning jockey Julien Leparoux added, "I had to ride him hard for a while, but he's a grinder and they were going pretty quick early. He was trying very hard and fought back all the way to the wire. That was a good race, for sure." 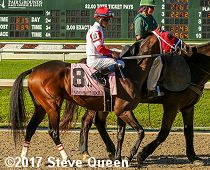 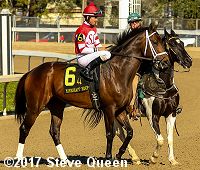 Left: Second place finisher International Star in the post parade. Jockey Miguel Mena said, "The horse ran good. He ran a big race. He ran second and got in a little trouble, but he ran good."

Right: Third place finisher Dazzling Gem in the post parade. Jockey Robby Albarado said, "He got a little aggressive on the backside and I wish he would have kept it off a little bit. I didn't want to make the lead that early, but that's horse racing."


A field of 7 older horses went to post for the $125,000 Fair Grounds Handicap (G3) at about 1 1/8 miles on the turf. John B. Connally (G3) runner-up Oscar Nominated was sent off as the 6-5 favorite over 2-1 Granny's Kitten, winner of the Colonel E.R. Bradley Handicap (G3), and 3-1 Enterprising, second in the Sunshine Millions Turf at Gulfstream. Oscar Nominated set the pace of 23.98, 49.83, and 1:13.84 over the firm going while pressed by Enterprising and stalked by 8-1 One Mean Man. Entering the stretch, Enterprising and jockey Julien Leparoux moved up 3 wide to gain the lead through 1 mile in 1:37.36, and held off Oscar Nominated to win by 3/4 length in 1:48.80. It was another length back to One Mean Man third. 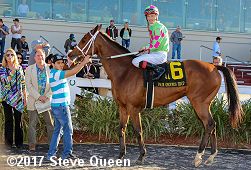 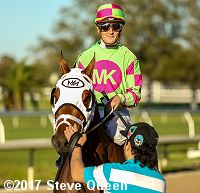 Left: Enterprising in the Fair Grounds Handicap winner's circle. Winning trainer Mike Maker said, "A very attractive horse and was another turf horse who looked like he would appreciate more ground. He's a Florida-bred and they have a lot of nice Florida-bred stakes. We will most likely send him to a state-bred stakes at Tampa, but we'll discuss it with the owner.

Right: Enterprising heads out to the track before the race. Winning jockey Julien Leparoux said, "My horse was game and he fought all the way. Mike told me to get him into the race because he can be a bit lazy. There was a slow half, but I got him into the race. At the quarter-pole, I tried to get a jump on him. From there it was straight on home." 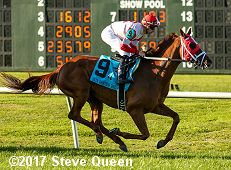 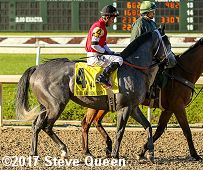 Left: Second place finisher and beaten favorite Oscar Nominated leads first time by. Jockey Florent Geroux said, "There was no speed in the race. If there was more speed, I would have taken him off the pace, but Julien stayed off of me long enough for me to get the jump on him."

Right: Third place finisher One Mean Man in the post parade. Jockey Mario Gutierrez said, "It was a good trip. I wish I would have known the horse a bit better. He's a clever horse, and I think he could have run a little bit better if I had let him make the lead and take the challenges as they come, because when he feels pressure, he pushes himself more." 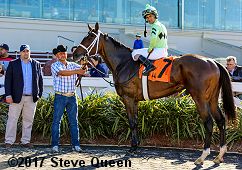 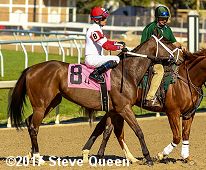 Left: Believe In Bertie in the Fair Grounds Handicap winner's circle. Winning trainer Brad Cox, celebrating his 600th career win said, "It's a nice accomplishment (600 wins), especially in a stakes. Now we'll focus on 700. She's a fast filly and very talented. It's great that a Louisiana-bred loves running at the Fair Grounds. I think she's a graded stakes filly and I've said that in the past. I continue to believe in her. I am not sure she wants to go much farther than a mile. She has one speed and it's 'fast'. She takes that as far as she can. Shaun has figured her out and you just have to get along with her and be a good passenger."