The highlight race of the Louisiana Downs meeting is the $400,000 Super Derby (G2), celebrating its 37th anniversary this year. A field of 7 three-year-olds went 1 1/8 miles on the main track in Bossier City on Saturday, under overcast skies and temperatures in the low 90's. LeComte (G3) winner and Risen Star (G2) third place finisher Mo Tom was sent off as the 8-5 favorite off his win in the Ohio Derby. In to challenge him included 9-5 second choice Dalmore and 2-1 third choice Texas Chrome, winner of the Super Derby Prelude after finishing second in the Iowa Derby (G3) and third in the Matt Winn (G3).

Jockey Kent Desormeaux sent Dalmore to the lead first time by and he set fractions of 24.59, 49.13, and 1:13.27 over the fast main track while pressed by 67-1 Mending Fences and stalked by Texas Chrome and 7-1 Whateverybodywants. Entering the stretch, jockey C.J. McMahon sent Texas Chrome to challenge for the lead along the rail, gaining the front midstretch through 1 mile in 1:37.28. Texas Chrome outfinished Dalmore late to win by 1/2 a length in 1:49.87. It was another 3/4 length back to Whateverybodywants third, while favorite Mo Tom failed to rally checking in 5th. 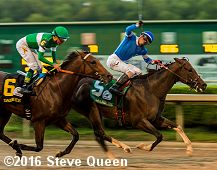 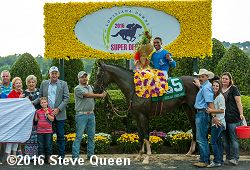 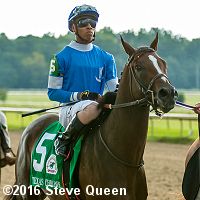 Left: Texas Chrome in the winner's circle. Winning trainer J.R. Caldwell said, "He came out of the Prelude so well," Caldwell said. "As well as he came off of his last race, and the way he's been training, and he had a trip across the track, I didn't think they could outrun him. You hate to be that confident, but I knew I had the horse. Everything went right for the horse and it was our day."

Right: Texas Chrome in the post parade. Winning jockey C.J. McMahon said, "Coming up to the 5/16 pole, I saw a hole open up and I opted to go for it and he showed me he was game to go and so was I. He accelerated and he finished phenomenally for me." Caldwell added Texas Chrome would start next in the Oklahoma Derby (G3) at Remington Park, where the trainer and horse are based. 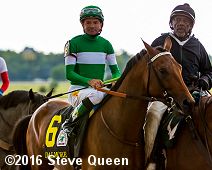 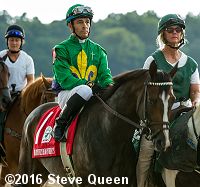 Left: Second place finisher Dalmore in the post parade. The 9-5 second choice set the pace under regular rider Kent Desormeaux but could not hold off the winner. The Keith Desormeaux trainee improved his record to 3 wins, 4 seconds, and 0 thirds in 13 starts, earning $279,302 for owners Big Chief Racing, Rocker O Ranch, and Keith Desormeaux.

Right: Third place finisher Whateverybodywants in the post parade. The 7-1 shot stalked the pace early under new jockey Jose Valdivia Jr. and held on to finish third beaten 1 1/4 lengths. The Kellyn Gorder trainee improved his record to 2 wins, 1 second, and 2 thirds in 6 starts, earning $279,970 for owner-breeder The Farm On 4 LLC. 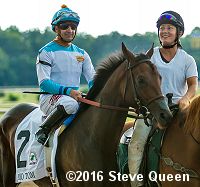 Fifth place finisher and beaten favorite Mo Tom in the post parade. The 8-5 choice raced sixth 4 1/2 lengths off the pace under new jockey Joe Bravo, but failed to rally finishing 5th beaten 10 3/4 lengths. The Tom Amoss trainee has a record of 4 wins, 0 seconds, and 3 thirds in 10 starts, earning $603,526 for owner G M B Racing. 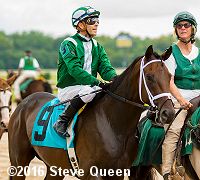 14-1 Stormin Afleet was quickest away through an opening quarter in 24.86 before Kielbasa moved up to take the front through fractions of 49.81 and 1:13.98, pressed by Stormin Afleet and stalked by 80-1 Do Guess Again and Royal by Nature. Entering the stretch, jockey Jose Valdivia Jr. moved Royal by Nature outside for room and he took over at the 1/8 pole through 7/8 in 1:25.73. Kept to task by Valdivia, Royal by Nature drew off to win by 1 1/4 lengths over late-running favorite Hembree in 1:37.39 over the firm going. It was another 3/4 length back to Kielbasa third. 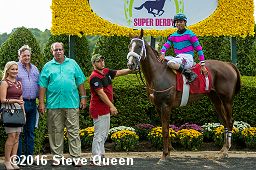 The $75,000 River Cities Stakes featured a field of 8 older fillies and mares going 1 1/16 miles on the turf. C d'Cat was the 2-1 favorite over 5-2 My Love Venezuela and 3-1 Artistic License. 44-1 A Song of Faith was quickest away through an opening quarter mile in 24.07 before 10-1 Kinky Vow took over on the clubhouse turn through a half in 48.32 and 3/4 in 1:12.14 while pressed by A Song of Faith and stalked by Artistic License. Entering the stretch, jockey C.J. McMahon angled Artistic License out for room and she gained the lead at the 1/8 pole through 1 mile in 1:35.62. Kept to task by McMahon, Artistic License drew off to win by 1 1/2 lengths over Kinky Vow in 1:42.33 over the firm going. Favorite C d'Cat rallied from 6th to get third just a nose back of second. 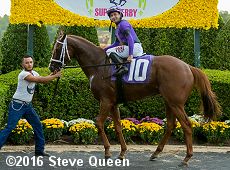 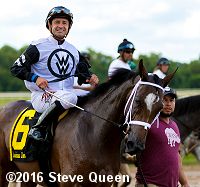