Fair Grounds Race Course hosted 4 graded stakes races on Saturday afternoon for Louisiana Derby Preview Day, including one of the major Triple Crown prep races: the $400,000 Risen Star Stakes (G2), the major local prep for the Louisiana Derby and worth 50 points as part of the Kentucky Derby Championship Series. A field of 11 three-year-olds went to post in this 1 1/16 mile main track feature, with Breeders' Cup Juvenile Turf (G1) runner-up Airoforce sent off as the 8-5 favorite off his Kentucky Jockey Club (G2) win. In to challenge him included 3-1 second choice Mo Tom, winner of the Lecomte Stakes (G3), and 5-1 third choice Gun Runner, fourth in the Kentucky Jockey Club. 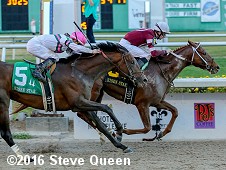 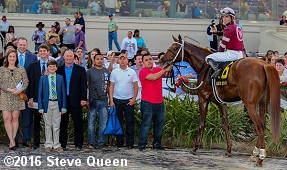 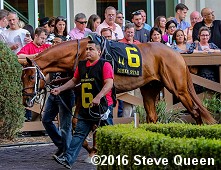 Left: Gun Runner in the winner's circle. Winning trainer Steve Asmussen said, "He's a very nice horse. We're very lucky to have him. I thought Florent gave him a beautiful trip with how the track was playing. He's shown talent the whole time and it's definitely good to see him in the winner's circle in a race like this." Owner Ron Winchell added, "That's the dream, right, the Kentucky Derby. He's been highly anticipated and a quality horse. Right now (Louisiana Derby) is the plan."

Right: Gun Runner in the paddock before the race. Geroux said, "I've really liked him since the first time I was on his back a few weeks ago working in the morning. He's super-athletic. I was very confident. I wanted to make sure I saved some ground. Earlier I got beat (with Stageplay) and was stuck going wide the whole way. It looked like the track was playing a little bit more inside-favoring. I kept him down there until I asked him to go and he ran a great race." 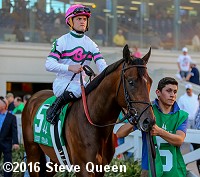 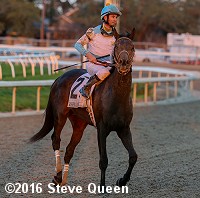 Left: Second place finisher Forevamo heads out to the track. Trainer Al Stall Jr. said, "He tried and had a nice trip. He acted like a horse who was trying to step it up and he sure did. Where that puts us, I don't know. At least we guessed right this time."

Right: Third place finisher Mo Tom returns after the race. Jockey Corey Lanerie said, "It was really good until we got kind of wiped out. Someone came from the outside and I lost all my momentum. I hope he's alright. I definitely thought he was the best horse today. He galloped out so good. I think if that didn't happen I would have caught him in the last couple jumps." 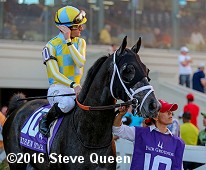 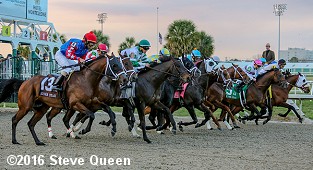 Left: Tenth place finisher and beaten favorite Airoforce heads out for the post parade. Jockey Julien Leparoux said, "I don't know. He was traveling good, and then he put his head up and didn't pick it up."

Right: The horses break from the gate for the Risen Star. Jockey Shaun Bridgmohan aboard pacesetter and 4th place finisher Candy My Boy (far outside post) said, "He went a little bit quicker than I wanted him to go, but I had to let him run from the 11-hole to get over, so I did. He cleared the field pretty easily, but then he had to work a little bit and I thought he ran really good to hang on. He gave me a quality effort."


The distaff counterpart to the Risen Star is the $200,000 Rachel Alexandra Stakes (G2) for 3-year-old fillies also going 1 1/16 miles on the main track, worth 50 points as part of the Kentucky Oaks Championship Series. Silverbulletday Stakes winner Stageplay was sent off as ths 3-5 favorite in the field of 9. In to challenge her included 5-1 second choice Forever Darling, winner of the Santa Ynez (G2) after finishing 8th in the Breeders' Cup Juvenile Fillies (G1), and 7-1 third choice Shaken, a debut winner last out. 28-1 Lovable Lyss and 30-1 Finley'sluckycharm dueled for the lead through fractions of 23.02 and 46.33 while chased by 8-1 Midnight on Oconee. On the far turn, Finley'sluckycharm poked her head in front through 3/4 in 1:11.91 before tiring. Midnight on Oconee floated 5 wide into the stretch and opened up a 1 1/2 length lead at the 1/8 pole through 1 mile in 1:38.73. However, 74-1 longest shot Venus Valentine, last through the first 7 furlongs and as many as 14 lengths out, came through along the rail to win by a length in 1:45.24. It was another 1/2 length back to Shaken third, while Stageplay checked in fifth. 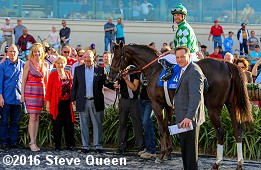 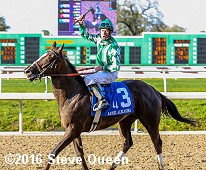 Left: Venus Valentine in the winner's circle. Winning trainer Tom Amoss said, "She's been a bit of a guessing game. She won her first start for us and we knew she had great raw talent. She was tying up and cramping up a lot muscle-wise. We solved this problem. We felt she had a real chance based on how she was coming into the race."

Right: Venus Valentine returns after the race. Winning jockey Corey Lanerie said, "They told me she was a longshot today but she was doing really good and I just let her run her race." 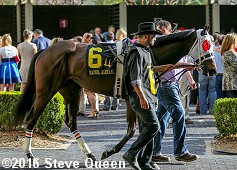 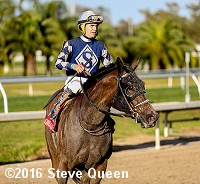 Right: Second place finisher Midnight On Oconee in the post parade. Jockey James Graham said, "She got an easy lead last time, but she did what she had to do today. She was floating her ears up, back and forth and I just sat as long as I could."

Left: Third place finisher Shaken heads out to the track before the race. Jockey Brian Hernandez Jr. said, "She dug in and got graded stakes placed in only her second start. She missed the break a little, but you have to expect that with this being only her second start. She even got a little tired late, but she kept digging in and giving me more. She's a nice filly." 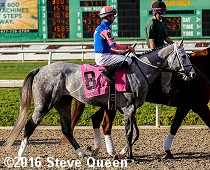 Fifth place finisher and beaten favorite Stageplay in the post parade. Jockey Florent Geroux said, "We were wide all the way and did all the dirty work for the winner." 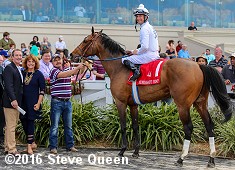 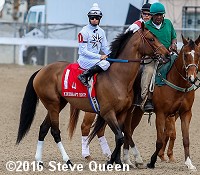 Left: Majestic Harbor in the winner's circle. Winning trainer Paul McGee said, "With as bad of a trip as he had last time, I was worried, but he breezed so well out of that race. He's been touting himself the last couple weeks, so we figured we would come back in this race."

Right: Majestic Harbor in the post parade. Lanerie said, "I figured I was the only speed, but he did break a little slow today and it took him a few strides to get himself together. I just let him do his thing." 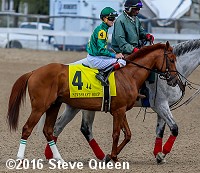 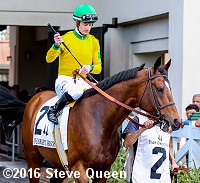 Left: Second place finisher Eagle in the post parade. Jockey Brian Hernandez Jr. said, "We had a good trip. I wish we hadn't had to break from the outside, but that was the card we were dealt. Turning for home I thought we were on the best horse and after he switched leads I thought for sure he'd run down that horse, but that other horse was just gritty. Tough old horse and a Grade I winner, but our horse ran his race."

Right: Third place finisher Point Piper heads out to the track before the race. 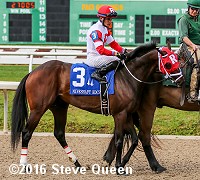 Fourth place finisher and beaten favorite International Star in the post parade. He was an early Kentucky Derby favorite last year after winning the Lecomte, Risen Star, and Louisiana Derby and went in as the leader in Road to the Derby points, but was scratched on race day due to an abscess in his left front foot.


A field of 9 older horses went to post for the $125,000 Fair Grounds Handicap (G3) at about 1 1/8 miles on the turf. Colonel E.R. Bradley Handicap (G3) winner and defending champ Chocolate Ride was sent off as the 6-5 favorite over 3-1 Roman Approval, fourth in last year's American St. Leger (G3), and 7-2 Departing, runner-up in the Fifth Season. Jockey Florent Geroux sent Chocolate Ride to the front first time by through fractions of 24.31, 49.72, and 1:13.91 over the firm course while pressed by Departing and stalked by 16-1 String King. Into the lane Chocolate Ride opened up a 1 1/2 length lead through 1 mile in 1:37.48. Roan Approval, 7th early, put in a strong rally but Chocolate Ride held him off by 3/4 length in 1:49.31. It was another length back to Departing third. 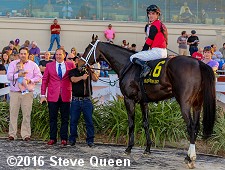 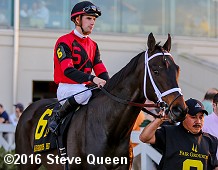 Left: Chocolate Ride in the Fair Grounds Handicap winner's circle for the second year in a row. Winning trainer Brad Cox said, "It's been a big day and it's all about the help. They do a tremendous job and winning today is a reflection of their hard work. He loves this turf course. It worked out today and he's really doing well."

Right: Chocolate Ride heads out to the track before the race. Winning jockey Florent Geroux said, "You never know how these races are going to unfold, but we had the best horse. He can run on the lead or take off it. He's a very tough horse, especially on this turf course. He's very hard to catch. Brad and his team have done a great job with him keeping him healthy and happy." 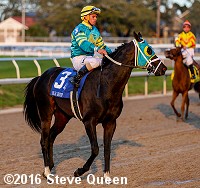 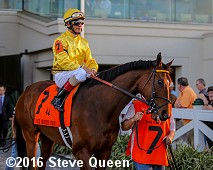 Left: Second place finisher Roman Approval returns after the race. Jockey Javier Castellano said, "I didn't have the best trip. I saved ground, but unfortunately, the pace was slow and the winner took advantage."

Right: Third place finisher Departing heads out to the track before the race.