2016 "Road to the Derby" Kickoff Day at the Fair Grounds

Fair Grounds Race Course in New Orleans hosted its "Road to the Derby Kickoff" card on Saturday with five stakes races. Conditions were overcast with temperatures in the mid 60's. The highlight of the afternoon was the $200,000 Lecomte Stakes (G3) for 3-year-olds going 1 mile 70 yards on the main track. The race is a points-scoring race in the Road to the Kentucky Derby series, the points used to determine Derby starting spots. Street Sense Stakes winner Mo Tom was sent off as the 2-1 favorite in the field of 9 (after the gate scratch of Dolphus) off his 3rd place finish in the Kentucky Jockey Club (G2) at Churchill Downs. In to challenge him included 3-1 second choice Uncle Walter, second in an allowance last out, and 4-1 third choice Fish Trappe Road, second in the Sleepy Hollow Stakes at Belmont Park.

Jockey Victor Espinoza sen 11-1 Z Royal to the front first time by and he set fractions of 23.64, 47.30, and 1:12.47 while as many as 2 lengths in front of 17-1 Pinnacle Peak and Uncle Walter stalking him second and third. On the far turn, 11-2 fourth choice Tom's Ready, 6th early, came out 5 wide for room to gain the lead through 1 mile in 1:38.89. However, Mo Tom, 8th early under Corey Lanerie after hitting the gate at the start, rallied down the center of the track to win going away by 2 1/4 lengths in 1:43.18 over the fast main track. It was another 3/4 lengths back from Tom's Ready to Uncle Walter third.
Results Chart 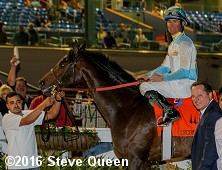 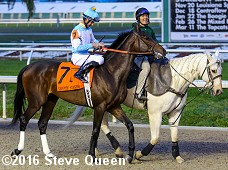 Right: Mo Tom in the post parade. Winning jockey Corey Lanerie said, "It was good. He broke really good and got pinched a little bit going into the first turn. We got knocked a little off-stride there, but he gathered himself up really good. Down the backside I was pretty confident, especially when I called on him to get in a little bit better position. On the middle of the turn I was going to try to maybe weave my way through but I had so much horse I said, ‘let me just put him in the clear.'" 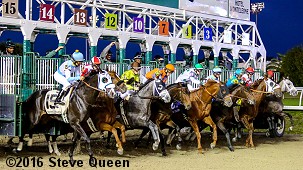 The start of the Lecomte Stakes with Mo Tom (#7) breaking from post 4 Trainer Tom Amoss said, "Great way to start his 3-year-old season. Today's race was a mile and 70, I'm sure Corey would agree, when the distance gets further, the better our horse is going to get – so we're really excited about that. I have to say Gayle Benson has been great, she's a great owner and she gets a big assist from her partner Tom Benson. We're really pleased, they're both New Orleans natives – we're really happy." 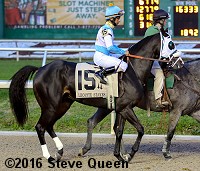 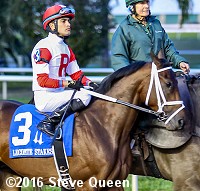 Left: Second place finisher Tom's Ready in the post parade. Jockey Shaun Bridgmohan said, "It was my first time on him and I wish I had known him a little bit better. He has a good turn of foot; good acceleration. He flattened out a little at the end, but he had made a big move."

Right: Third place finisher Uncle Walter in the post parade. Jockey Miguel Mena said, "I had a great trip and a nice horse. He's a little bit on the green side and I think there's a lot more in there and we haven't seen his best yet. He ran hard, I just think we got beat by horses who have had more racing. He'll be tough to beat next time."


The distaff counterpart to the Lecomte is the $150,000 Silverbulletday for 3-year-old fillies also going a mile and 70 yards on the main track. Stageplay was sent off as the 3-5 favorite in the field of 7 over 7-2 second choice Lovable Lyss and 7-1 third choice Jet Black Magic.

Jockey James Graham sent 15-2 fourth choice Midnight On Oconee to the lead first time by and she set fractions of 24.18 and 47.89 while pressed by Lovable Lyss and stalked by Stageplay. On the far turn, Stageplay, 3 wide, gained the lead through 3/4 in 1:12.60. Kept to task by jockey Florent Geroux, Stageplay easily held off Midnight On Oconee by 1 1/4 lengths in 1:43.76. It was a long 4 3/4 lengths back to Jet Black Magic third.
Results Chart 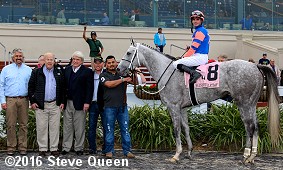 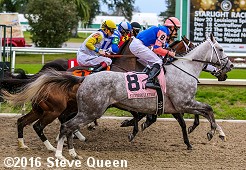 Left: Stageplay in the winner's circle with trainer Steve Asmussen at the far left. Asmussen said, "She's a very talented filly. I'm very fortunate to have her for Mr. (Mike) Rutherford. She came in from GoldMark and they had the highest opinion of her and she's definitely not disappointed."

Right: Stageplay breaks from the gate. Winning jockey Florent Geroux said, "She's a very intelligent filly. Very smart. She broke very sharply from the gate and from there I just sent her along. She did the rest and dragged me to the lead and collected the win." 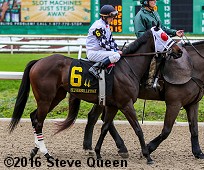 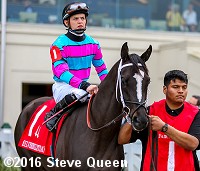 Left: Second place finisher Midnight on Oconee in the post parade. Jockey James Graham said, "I got a little bit of a breather coming out of the turn. Asmussen's filly came at me and passed me, but I was getting back at her late. (Midnight On Oconee) is hardy. (Stageplay) had to run to beat me."

Right: Third place finisher Jet Black Magic. Jockey Colby Hernandez said, "I had a great trip. It set up exactly how we wanted and she ran a big race."


A field of 9 older horses went to post in the $125,000 Colonel E.R. Bradley Handicap (G3) at about 1 1/16 miles on the turf. Last year's Mervin Muniz (G2) and Fair Grounds Handicap (G3) winner Chocolate Ride was sent off as the 4-5 favorite off an allowance win. In to challenge him included 7-2 second choice Sky Flight, winner of the Artie Schiller at Aqeuduct, and 7-1 third choice and last year's winner String King off a close second in the Louisiana Turf Stakes. 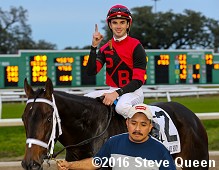 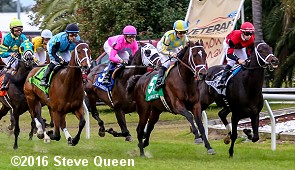 Left: Winning jockey Florent Geroux celebrates aboard Chocolate Ride after the race. Geroux said, "He broke a little slower than usual today, but he got a little breather around the first turn. He's a pro and that's what great horses are for – they win even when things don't go their way. I'm hoping he wins a Grade 1 this year."

Right: Chocolate Ride leads down the stretch. Winning trainer Brad Cox said, "We couldn't be happier for him. He tries. He's been training excellent. We expected a big effort. He gave it to us." 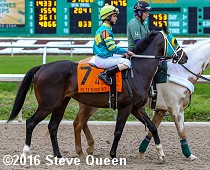 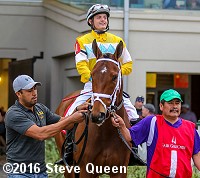 Right: Third place finisher Blarp and jockey Colby Hernandez head out to the track before the race. The Joe Sharp trainee has a record of 4 wins, 3 seconds, and 1 third in 23 starts, earning $144,540 for owners Robert Persons and Earl Sanderson Jr. 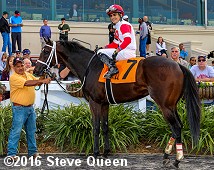 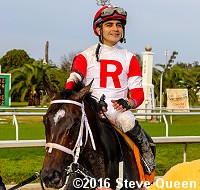 Left: International Star in the winner's circle. He was the winner of last year's Lecomte Stakes, Risen Star Stakes, and Louisiana Derby but was scratched from the Kentucky Derby in the morning on Derby day.

Right: International Star returns after the race. Winning jockey Miguel Mena said, "He's a nice horse. Mike (Maker) was telling me how good he was doing and he likes this racetrack. We were on the rail on the turn and I swung him out so he wouldn't get stopped today and he was full of run. His turn of foot from the 5/16 pole was unbelievable." 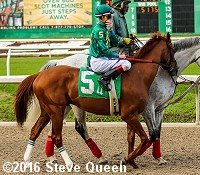 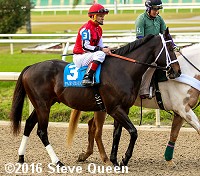 Left: Second place finisher and beaten favorite Eagle in the post parade. Jockey Brian Hernandez Jr. said, "We had a great trip. I thought I was on the best horse. We made the lead easily and I was surprised when (International Star) went by, but my horse fought back."

Right: Third place finisher Ride On Curlin in the post parade with jockey Patrick Valenzuela aboard. The Billy Gowan trainee improved his record to 3 wins, 4 seconds, and 6 thirds in 19 starts, earning $794,987 for owner Daniel Dougherty.


The distaff counterpart to the Col. Bradley is the $60,000 Marie G. Krantz Memorial Handicap, with a full field of 12 older fillies and mares also going about 1 1/16 miles on the turf. 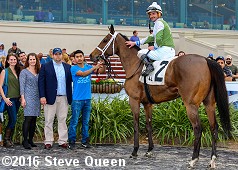 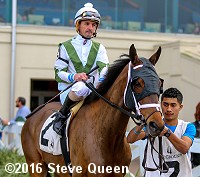 Left: Street of Gold in the winner's circle. Winning trainer Brad Cox said, "She's been doing great. Super pleased with her. She was 3-2. She ran like it. She definitely likes this turf course. It took a Grade 1 winner (Kitten's Dumplings) to beat her last time."

Right: Street of Gold heads out for the post parade. Winning jockey Robby Albarado said, "She broke a little alertly today, better than last time. I was up against a slow pace again today which makes it a little more special, but I ran down a nice filly (Mizz Money) today." 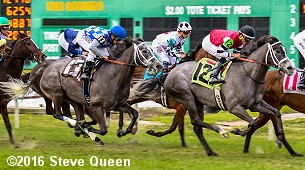