The last Grade 1 of the New York racing season is the $500,000 Cigar Mile Handicap (G1), traditionally run on the Saturday after Thanksgiving. This 1 mile trip around one turn of the Aqueduct main track often plays a role in deciding Eclipse Award champions in certain categories. Conditions were typical for late November, with partly cloudy skies and temperatures in the mid 40's. Pennsylvania Derby (G2) winner Connect was sent off as the 3-2 favorite in the field of 10. In to challenge him included 11-4 second choice Anchor Down, winner of the Kelso Handicap (G2) at Belmont, and 6-1 third choice Divining Rod, second in the Fayette (G2) at Keeneland.
Jockey Jose Ortiz sent Anchor Down to the lead exiting the chute through an opening quarter of 23.21 while pressed by 9-1 Threefiveindia and stalked by Divining Rod. Near the end of the backstretch Threefiveindia gained a short lead through a half in 46.44. On the turn, Divining Rod, 3 wide throughout, moved up to take the lead through 3/4 in 1:11.00 and looked homefree, opening up a 1 1/2 length lead at the 1/8 pole. However, favorite Connect, 6th early under Javier Castellano, came out 4 wide into the lane and rallied to get up by a head in 1:35.34 over the fast main track. It was a long 5 lengths back to 18-1 Realm third. 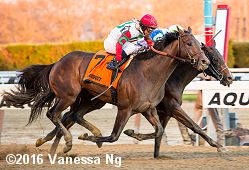 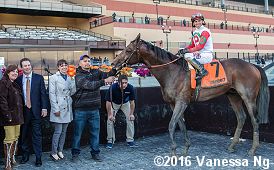 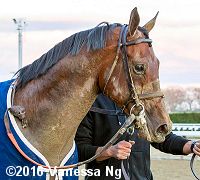 Left: Connect poses in the winner's circle. Winning trainer Chad Brown said, "It was an exciting race and this is such a nice horse. Javier really rode him good. He had to move a little earlier than he wanted and he got a bit of a wide trip, but he knew how to time it just right. Then he got in a battle with a real classy horse (Divining Rod) there on the inside, and luckily, we came out on top in the photo. I'm real proud of this horse. He hadn't run since the Pennsylvania Derby, so we freshened him a little and there is always a bit of a risk doing that. He could be a little short. But he had just enough today and got it done at a mile."

Right: Connect heads back to the barn after the race. Brown added, "I was a little concerned because this horse hadn't had a race under his belt since the Pennsylvania Derby, but I know how much heart he has and how competitive he is. He really showed a lot of heart today. It's very rewarding to have a horse who shows you so much, especially as he was an unrated 2-year-old. Beating older horses in a race like this is a very high mark on his resume." 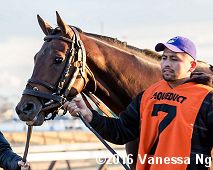 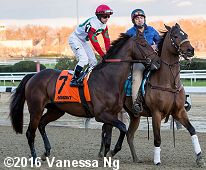 Left: Connect walks over before the race. Winning jockey Javier Castellano said, "We had a good trip and that's all I was looking for today. The way it set up was perfect. There was a lot of speed in the race. They went pretty quick and started backing up and every time I asked him, he responded every step of the way. I liked the way he finished. He's a good horse. He fought back. I'm so proud of the way he did it today."

Right: Connect in the post parade. Castellano added, "You don't have much to think about (in a stretch duel). You ride and focus and try to motivate your horse. That's what I did." 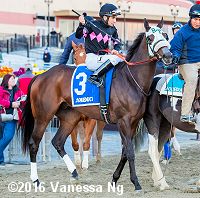 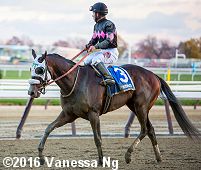 Left: Second place finisher Divining Rod heads out for the post parade. Trainer Arnaud Delacour said, "I thought that was a great stretch from both horses. I think Connect is a great horse, so I'm thrilled. I don't really think anything could have made a difference. I think everything went pretty much our way. We had good position, we started at the same time as Connect. We fought all the way down the stretch. I don't see any excuse. We'll have to regroup and see where we go next."


Kicking off the Saturday stakes quartet, a field of 7 three-year-old fillies went to post in the $250,000 Comely Stakes (G3) at 1 1/8 miles, one complete lap of the main track. Gazelle (G2) winner Lewis Bay was the 3-5 favorite off her win in the Turnback the Alarm Handicap (G3), over 3-1 Unbridled Mo, winner of the Monmouth (G3) and Remington Oaks, and 9-2 Going for Broke, with in the Beldame (G1) after finishing second in the Alabama (G1). 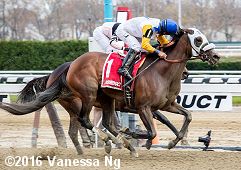 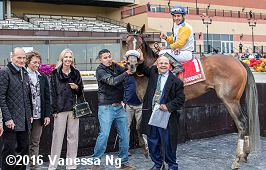 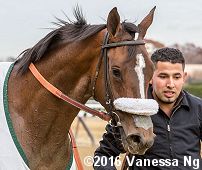 Left: Verve's Tale in the winner's circle with owner Charles Fipke at his head. Winning jockey Paco Lopez said, "I got carried wide on both turns. In the first turn, everybody came over and I waited, waited. Then I started picking up horses outside at the 3/8 pole. I didn't have much pace to run at. In the stretch, she gave me a lot. She's a very nice filly and she tried really hard today."

Right: Verve's Tale heads back to the barn. Winning trainer Barclay Tagg said, "I wasn't quite sure she was where she should be for these type of horses, but she was doing so well, I couldn't hold her down, so I put her in there. She loves to run. She's nice and sound. She's gone through all kinds of stuff, but she's been doing quite well. I wasn't afraid to bring her over." 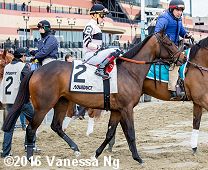 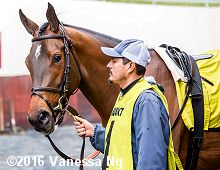 Right: Third place finisher Going for Broke in the paddock before the race. The Chad Brown trainee improved her record to 3 wins, 2 seconds, and 1 third in 7 starts, earning $316,200 for owner-breeder Waterford Stables Inc.

.
The $300,000 Remsen Stakes (G2) featured a field of 10 two-year-olds going 1 1/8 miles on the main track. It is also a points-scoring race with the winner earning 10 points in the Road to the Kentucky Derby. Debut winner by 8 lengths Takaful was sent off as the 4-5 favorite over 4-1 Mo Town, a maiden winner by 6 lengths in his second try, and 9-2 No Dozing, fourth last out in the Breeders' Futurity (G1) at Keeneland. 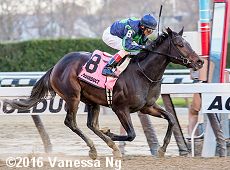 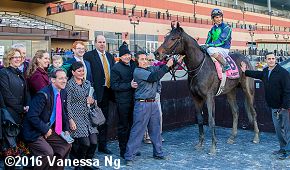 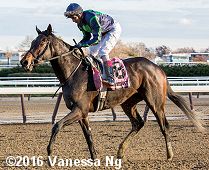 Left: Mo Town in the winner's circle. Winning trainer Tony Dutrow said, "Going back to March, we always felt this was a good horse. I felt strongly that he would run big today. For him to prove this much, I feel great. I wanted the horse fresh and happy going into his 3-year-old year. I didn't pressure this horse in getting him ready for today. I feel strongly that we have not seen what this horse is capable of yet. He's going to go Payson (Park, Florida) and he'll have a very light December; next to nothing. I'll talk to (the owners) about (the Gotham) and see how they feel."

Right: Mo Town heads returns after the race. Winning jockey John Velazquez said, "He was very good. He got carried wide into the first turn and after that I had to do the dirty job with the horse in front. After that, he did everything well. Hopefully he can come back better as a three-year-old." 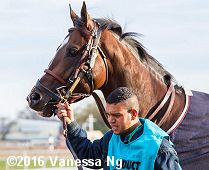 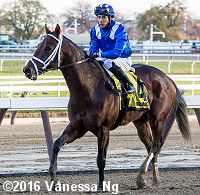 Left: Second place finisher No Dozing walks over before the race. The Arnaud Delacour trainee improved his record to 2 wins, 1 second, and 0 thirds in 4 starts, earning $129,340 for owner-breeder Lael Stables (Roy and Gretchen Jackson).

Right: Third place finisher and beaten favorite Takaful returns after the race. Jockey Jose Ortiz said, "He didn't stumble (at the break) but he was bit slow today. As soon as he broke, he ran. He wanted to go the first 3/16, the first 1/4, until I got him relaxed. Finally, on the backside, I did get him to relax. He tired a little bit but he's a great horse. He came from 6 1/2 to 1 1/8 in a short period." Trainer Kiaran McLaughlin added, "The break didn't help us and it looked like he was pretty keen the first 1/8 after the break, but he dug in and held on for third."


The distaff counterpart to the Remsen is the $300,000 Demoiselle Stakes (G2) for 2-year-old fillies also going 1 1/8 miles, and is a points-scoring race in the Road to the Kentucky Oaks. Jamyson 'n Ginger was sent off as the 9-5 favorite in the field of 9 off her fifth place finish in the Breeders' Cup Juvenile Fillies (G1). In to challenge her included 7-2 Libby's Tail, second in the Frizette (G1), and 11-2 Miss Sky Warrior, winner of the Tempted (G3). 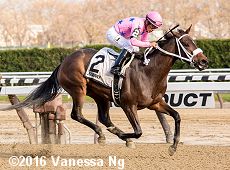 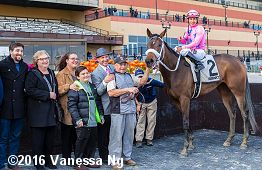 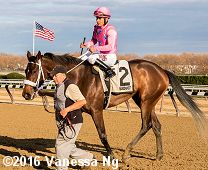 Left: Miss Sky Warrior in the winner's circle. Winning trainer Kelly Breen said, "Two turns was key for her as opposed to the one-turn mile last time, where she had a right to get tired. After this, we're going to give her some R&R and hope to have her back at Gulfstream Park in February. She's a game filly. If I have a thought in the back of my head of trying to get her to the Kentucky Oaks, I'll start mapping it out. It would be great to go with a horse that's legit."

Right: Miss Sky Warrior returns after the race. Winning jockey Paco Lopez said, "When the gates opened it laid out a little different. I made the lead briefly going into the first turn and heading into the second 1/4 we were going a bit slow but I thought she was in a perfect position. I just waited. I knew she was a nice filly from when she ran at Belmont Park. Heading to the 1/16 pole I thought we could get to (Jamyson 'n Ginger). She's a nice filly." 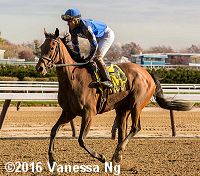 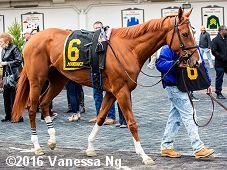 Left: Second place finisher and beaten favorite Jamyson 'n Ginger returns after the race. Jockey Irad Ortiz Jr. said, "I got a perfect trip. She was coming back on short rest, she flew back from the Breeders' Cup and it might be a little quick for her. They're fillies and she's a little filly, but no excuses. She just got beat. She ran hard."

Right: Third place finisher Bonita Bianca in the paddock before the race. The Rudy Rodriguez trainee improved her record to 2 wins and 1 third in 3 starts, earning $216,000 for owners Michael Dubb, Bethlehem Stables and Michael Imperio.