The co-feature on Saturday at Parx Racing near Philadelphia was the $1.25 million Pennsylvania Derby (G2) for 3-year-olds going 1 1/8 miles on the main track. Conditions were excellent most of the day with mostly sunny skies and temperatures in the low 70's, with the main track fast and the turf firm and an estimated 16,000 fans in attendance. Juvenile champion and Kentucky Derby (G1) winner Nyquist was sent off as thd 6-5 favorite in the field of 12 off his 4th place finish in the Haskell Invitational (G1). In to challenge him included 5-1 second choice Gun Runner, 3rd in the Travers (G1), and 6-1 third choice Exaggerator, winner of the Preakness (G1) and Haskell but 11th in the Travers.

Jockey Paco Lopez sent 20-1 Awesome Slew to a clear lead first time by through fractions of 23.01, 47.35, and 1:11.81 while pressed by 13-2 Cupid and stalked by Nyquist. Turning for home, the pacesetters tired as 10-1 Connect, 5th early under Javier Castellano, came through on the rail to gain a short lead on Gun Runner through 1 mile in 1:37.20. Connect outfinished Gun Runner for the 1/2 length win clocked in 1:50.20. It was a long 4 lengths back to late-running 62-1 longshot Wild About Deb third, while favorite Nyquist faded to 6th.

Also on the card was the Cotillion Stakes (G1) won by Songbird. 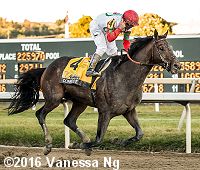 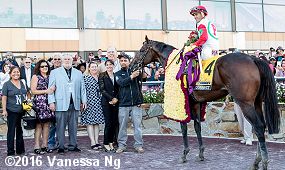 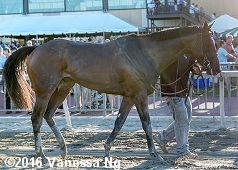 Left: Connect in the winner's circle. Winning trainer Chad Brown said, "He has only run one bad race (the Travers) and he came out of it with a lung infection. (Owner Paul Pompa) felt it was a legitimate excuse and he pushed to run in the Pennsylvania Derby. I'm glad he did." Assistant Cherie De Vaux added, "He broke really well and found himself in a really good position on the rail, saving all the ground. Javier was really patient with him, took his time with him and made his one run and the horse was really gutsy to hang in there."

Right: Connect heads back to the barn after the race. 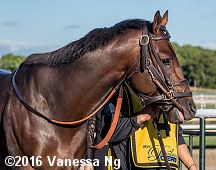 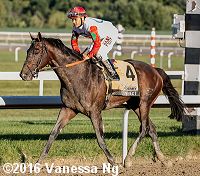 Left: Connect heads to the paddock before the race.

Right: Connect returns after the race. Winning jockey Javier Castellano said, "I was confident in the stretch. I had a lot of horse and didn't think the other horse was going to get by. This kind of horse, he's a big horse and I think he put it together today, and I'm very satisfied with the way he did it today. The owner and the trainer would make that decision (about running in the Classic). I'm the pilot. If they need me, I'm willing to work it out." 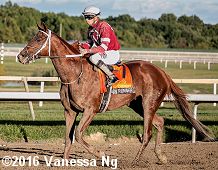 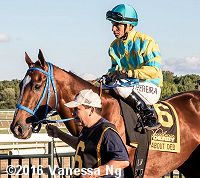 Left: Second place finisher Gun Runner returns after the race. Trainer Steve Asmussen said, "He's such a nice horse. He ran a solid race and beat the horses that beat him in the (Kentucky Derby). He was second, but I kind of planned on winning today."

Right: Third place finisher Wild About Deb heads out to the track before the race. The 62-1 longshot sat 7th 6 lengths off the pace under Tiago Pereira, then rallied to get third beaten 4 1/2 lengths. The Ramon Preciado trainee improved his record to 1 win, 2 seconds, and 2 thirds in 6 starts, earning $261,500 for owner Marisa Lizza. 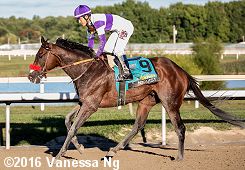 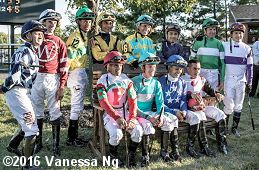 Left: Sixth place finisher and beaten favorite Nyquist returns after the race. Owner Paul Reddam said, "The winner ran well and we didn't have any apparent excuse. We'll have to check the horse over and make sure that he's (well) and we'll work from there. That was definitely the worst performance of his life, so that's not how you want to go into the Breeders' Cup. Maybe it'll somehow look different tomorrow, but I'm not sure how." Trainer Doug O'Neill added, "He was in a perfect spot. Mario (Gutierrez) said he was kind of struggling with the track but he had a good trip and we have no excuses. We'll take him home and talk about what we should do next."

The first of three graded stakes on Saturday was the $300,000 Gallant Bob Stakes (G3) for 3-year-olds sprinting 6 furlongs on the main track. Noholdingback Bear was sent off as the 3-1 favorite in the field of 11 off his third place finish in the King's Bishop (G1). In to challenge him included 7-2 second choice Threefiveindia, winner of two allowances in a row, and 4-1 third choice Navy Hymn, an allowance winner at Del Mar last out.

Jockey Rafael Bejarano sent Navy Hymn to the lead exiting the chute and he set fractions of 22.14 and 45.29 while pressed by 10-1 Awesome Speed and stalked by Noholdingback Bear. Entering the lane, jockey Eurico Rosa da Silva asked Noholdingback Bear to challenge and he took over through 5/8 in 57.52. Kept to task by Da Silva, Noholdingback Bear cruised to a 1 1/4 length win over late-running 15-2 Mind Your Biscuits in 1:09.61. It was another 1/2 length back to Threefiveindia third. 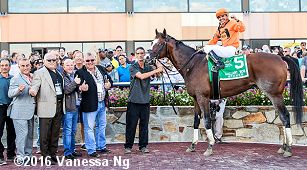 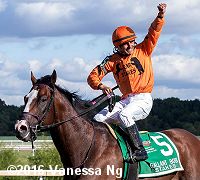 Left: Noholdingback Bear in the winner's circle. Winning trainer Mike De Paulo said, "He broke pretty good and they ran away from him a little early, and Eurico sat off the pace, went a little wide and ran them down. In the King's Bishop, 7/8 was a little far for him – 6, 6 1/2 furlongs is perfect for him. I think right now, he is a better stronger horse. We are looking to going to the Breeders' Cup Sprint if we can."

Right: Noholdingback Bear returns after the race. Winning jockey Eurico Rosa da Silva said, "I got squeezed just a little bit, the horse outside me came in and closed the door. But it worked out well because my horse is very relaxed and an easy horse to ride. I just waited for the stretch and had a lot of horse all the way. He recovered very nicely, he did everything very professional. Last time, 7/8 was not his distance, but at 3/4 I can press any horse with him." 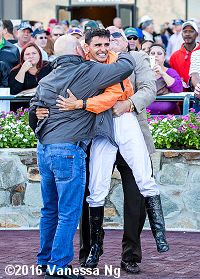 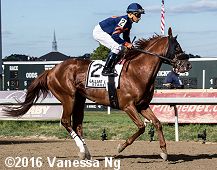 Right: Second place finisher Mind Your Biscuits in the post parade. The 15-2 shot raced 8th 4 3/4 lengths off the pace under Cornelio Velasquez then rallied to get second beaten 1 1/4 lengths. The Robert Falcone trainee improved his record to 3 wins, 4 seconds, and 2 thirds in 11 starts, earning $360,366 for owners J Stables and Scott, Hope and Daniel Summers. 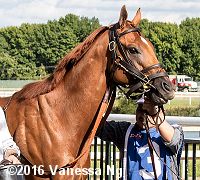 Third place finisher Threefiveindia heads into the paddock. The 3-1 second choice stalked the pace 4th 1 1/4 lengths back under Javier Castellano then passed the tiring pacesetter to finish third beaten 1 3/4 lengths. The Chad Brown trainee improved his record to 3 wins, 0 seconds, and 1 third in 5 starts, earning $145,367 for owner Amerman Racing LLC.