The 48,630 fans who crammed into historic Saratoga Race Course for the 147th Travers Stakes were also treated to 6 additional graded stakes on the undercard. Conditions were ideal for racing, with mostly sunny skies, minimal wind, and temperatures in the low 80's, with the main track fast and turf courses firm. The 1 1/4 mile track record fell in the Travers but other track records were almost beaten due to the lighting fast surfaces.

Immediately before the Travers, a field of 7 older horses contested the $1 million Sword Dancer Stakes (G1) over 1 1/2 miles on the inner turf course, looking for automatic entry into the Breeders' Cup Turf. Manhattan (G1) and Bowling Green (G2) winner Flintshire was sent off as the 1-5 favorite over 11-2 Money Multiplier, second in both the Man O'War (G1) and United Nations (G1), and 9-1 Grand Tito, second in the Bowling Green. 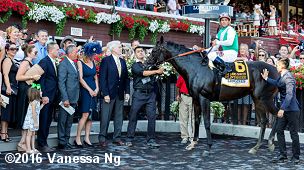 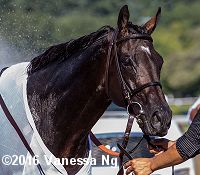 Left: Flintshire in the winner's circle. Winning trainer Chad Brown said, "Aaron Gryder (aboard Inordinate) did a fabulous job as the pacesetter. Still (Flintshire) had trouble in the back. Javier decided to go on the inside and it turned out to be the right decision. I've never seen anything like him outside of Lady Eli. He's the greatest horse I've ever seen.Ý He came to me a great racehorse. I just try to keep him happy and healthy. Give credit to my team. They have kept him in top form."Ý

Right: Flintshire gets hosed off after the race. Winning jockey Javier Castellano said, "I am very lucky and fortunate. The way I rode this horse I tried to save some ground.Ý Everyone ended up in the same position and I had to make my own decision and use my best judgment and it worked out. I was very lucky to go and cut through on the rail and accelerate. He is a phenomenal horse. I've never seen any horse with that much acceleration on the grass. (Inordinate) got a little tired and with the tight corners, he drifted out a little bit. I saw my best opportunity to go forward and it worked out for me today." 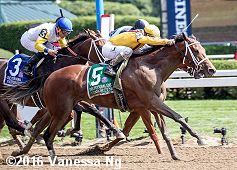 Kicking off the stakes septet on Travers day, the $750,000 Personal Ensign Stakes (G1) featured a field of 5 older fillies and mares going 1 1/8 miles with the winner earning a spot in the Breeders' Cup Distaff. Shuvee Handicap (G3) and La Troienne (G1) winner Curalina was the 9-5 favorite over 5-2 Cavorting, winner of the Ogden Phipps (G1) and Ruffian (G2), and 11-4 I'm a Chatterbox, winner of the Delaware Handicap (G1). 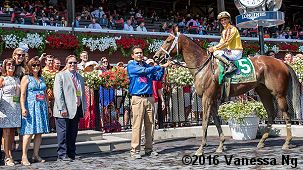 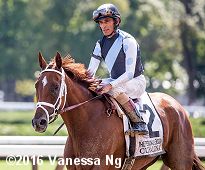 Left: Cavorting in the winner's circle. Winning trainer Kiaran McLaughlin said, "She ran terrific. Javier got her back and the others went four-wide. HeÝsaved ground and I think that was the key to race. He [Javier] gets along great with this filly. That was an important move he made into the first turn, Not sure if we'll go straight to the Breeders' Cup or run back at Belmont." Jockey Javier Castellano added, "The way the race developed was amazing. I was able to cover up a little bit, and then turning for home, the way she did it was amazing. I had a lot of horse under me and I absolutely felt the power. It worked out great. It was perfect; a dream trip."

Right: Second place finisher and beaten favorite Curalina returns after the race. Jockey John Velazquez said, "The plan today was to be near the lead. There was no speed. The only speed was (I'm a Chatterbox). That's where we landed. She ran hard, she just got beat." 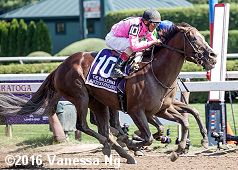 The $500,000 Ballerina Stakes (G1) featured a field of 10 older fillies and mares going 7 furlongs on the main track, with the winner earning automatic entry in the Breeders' Cup Filly and Mare Sprint. Acorn (G1) winner and Coaching Club American Oaks (G1) runner-up Carina Mia was sent off as the even-money choice over 5-1 Sheer Drama, 5th in the Ogden Phipps, and 11-2 Wavell Avenue, winner of the Shine Again.

Carina Mia dueled on the front end with 6-1 Paulassilverlining through fractions of 23.39 and 45.54 while stalked by 13-1 By the Moon and 10-1 Haveyougoneaway. Paulassilverlining gained a short lead midstretct through 3/4 in 1:09.06 before tiring, as Haveyougoneaway, 5 wide into the lane, took over at the 1/16 pole and outfinished By the Moon by 1/2 a length in 1:21.63. It was another length back to favorite Carina Mia third. 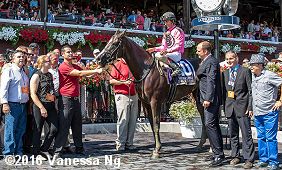 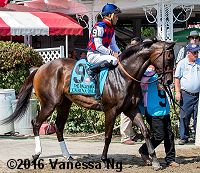 Left: Haveyougoneaway heads to the winner's circle. Winning trainer Tom Morley, celebrating his first Grade 1, said, "First one means everything. It's the Ballerina, it doesn't get much bigger than this. It's Travers Day, we're here in Saratoga. That's the icing on the cake. This filly, she's good enough to win going six [furlongs] and she's got plenty of gears; you can be tactical with her. We knew she'd stay; she'd only just got there in the Honorable Miss and she ran a very good second to Bar of Gold going a mile at Belmont. The 7/8 is absolutely her wheelhouse and Johnny had her in the right spot the whole race. It was a great ride and a great result. Now obviously we'll have to plot our route to California carefully. She's had three big efforts in relatively quick succession, so we might just train up to the Breeders' Cup." 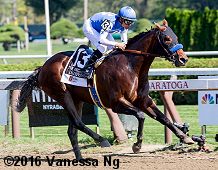 The $500,000 King's Bishop Stakes (G1) featured a field of 12 three-year-olds sprinting 7 furlongs on the main track. Allowance winner Drefong was the 3-1 favorite over 7-2 Mohaymen, 4th in the Jim Dandy (G2), and 9-2 Summer Revolution, undefeated in 2 starts. 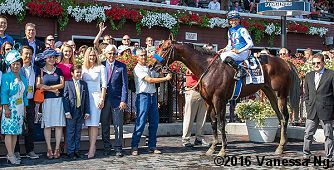 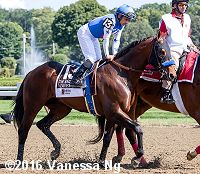 Left: Drefong in the winner's circle. Winning trainer Bob Baffert said, "He's fast, he looks the part. He's got a great mind. I've always thought he was cut out to be this kind of horse, but he had to prove it today. That was a tough little bunch he was in there with. If you can do it on a day like the Travers, that's even more important. We're trying to win these big races. I'm trying to get him to the Breeders' Cup Sprint and I didn't want to run him in the Bing Crosby, I had the other horse in there, this was the last chance to run against 3-year-olds."

Right: Drefong in the post parade. Winning jockey Mike Smith said, Ý"He's fast. He's a good horse. My main concern was the surface switch, when you come from tighter surfaces to here, where it is a bit more sandy. But he is so strong, and pushes so hard. He gets a hold of it at Santa Anita, but I didn't know about here. He might have got hold of it better. I didn't even hit him. I just rode him with my hands, with my whip down. He ran big today." 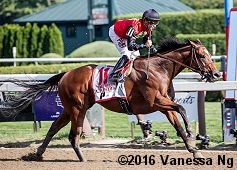 The $700,000 Forego Stakes (G1) is a Breeders' Cup Challenge qualifier in the Sprint division with a field of 10 older horses sprinting 7 furlongs. Belmont Sprint (G3) and Vanderbilt (G1) winner A.P. Indian was the 11-10 favorite over 3-1 Catalina Red, third in the Vanderbilt, and 6-1 Limousine Liberal, second in the Smile Sprint (G2). 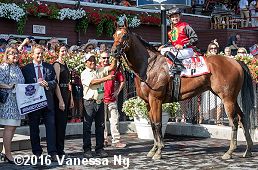 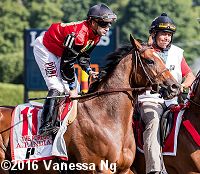 Left: A.P. Indian in the winner's circle. Winning trainer Arnaud Delacour said, "He came back (from the Belmont Sprint) so much more confident for some reason. Ever since, he has been improving and consistent.ÝI told Joe nothing. I just asked him what he wanted to do and he told me what he wanted to do, and I said 'good luck.' I did have confidence in him with a race over the track and also that he won the two stakes this year already going 7/8. That is always an edge. Obviously, the horse was very fit. He has enough tactical speed to go six and enough stamina to keep going at seven, so it's pretty amazing."

Right: A.P. Indian in the post parade. Winning jockey Joe Bravo said, "I was really shocked, he was just so relaxed all the way through to the wire. It's really a pleasure to be able to ride a horse like that. It just shows the control and different dimensions he possesses. He ran a huge race at 1 1/16 and got beat by a nose, so that made me really feel comfortable with him. The way he did it so relaxed just makes you feel so comfortable. It took him a little time to develop but wow, he's just enjoying the game. He knew he would beat those horses today." 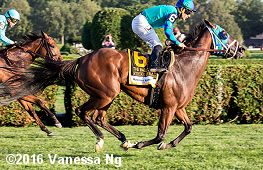 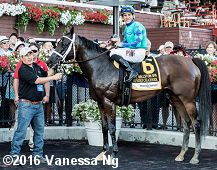 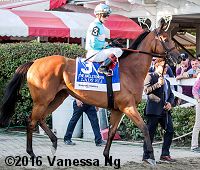 Left: Strike Charmer in the winner's circle. Winning trainer Mark Hennig said, "I didn't know they'd go that fast early but we were where we needed to be with the pace being that way. We talked in the paddock after watching the Flintshire race and I told Javier, 'Don't get stuck behind that rabbit because everybody's going to be lined up at the 1/4 pole thinking they're coming off the rail.' Lady Eli took the overland route and I thought he did a great job of just kind of hiding out behind her and then trying to pounce. We were fortunate enough to run her down today."

Right: Second place finisher and beaten favorite Lady Eli heads out for the post parade. Trainer Chad Brown said, "I'm a little disappointed she got beat but I'm happy that she's back to the races. She made a big move there on the turn under a wicked pace and it just took a little too much out of her. Irad said he got her off the fence down the backside so they wouldn't trap her. He said he moved into a pretty strong pace. He didn't want Sentiero Italia and Miss Temple City to get too far away from him so he moved up on them and felt he had them all measured. He just didn't imagine that horse coming from the back and getting him.