The Saturday after Independence Day is one of the highlights of the Belmont Park spring-summer meeting, with 6 rich graded stakes run on Saturday afternoon. Conditions were excellent on Long Island, with overcast and temperatures in the low 70's, with a fast main track and both turf courses firm. The highlight race of the afternoon was the $1.25 million Belmont Derby Invitational (G1) for 3-year-olds going 1 1/4 miles on the inner turf course. Long Island Sound, third in the Tercentenary (G3) at Royal Ascot last out, was sent off as the 5-2 favorite in the field of 13. In to challenge him included 5-1 second choice Camelot Kitten, winner of the American Turf (G2) and Pennine Ridge (G3), and 6-1 third choice Deauville, 11th in the Epsom Derby (G1) after finishing a close second in the Dante (G2). 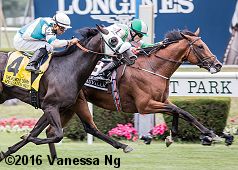 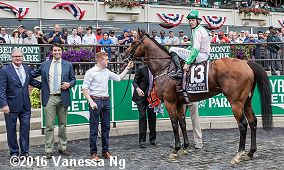 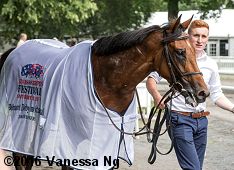 Left: Deauville in the winner's circle. T.J. Comerford, assistant to winning trainer Aidan O'Brien said, "I saddled two good horses, the trip just worked out a little better for the winner. He finished stronger, had a good setup and was left with plenty of run. The best horse won and he gave a great effort."

Right: Deauville returns to the barn with his winner's blanket. Winning jockey Jamie Spencer said, "I spoke to Aidan earlier and he was adamant that if I got a good break, to be positive and lead if there wasn't a leader. When you set them alight, sometimes they don't switch off again. But he switched off great once he turned into the backstretch. He was full of energy and had plenty left in reserve for the stretch. He's a hard-trained horse who was ready for the day." 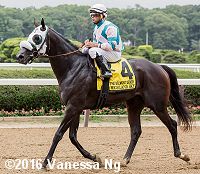 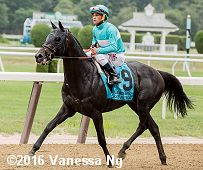 Left: Second place finisher Highland Sky returns after the race. Trainer Barclay Tagg said, "He likes to come from behind and it's hard on him. You need a lot of luck as you have to get around 13 horses. He loses a lot of ground every time. It's nobody's fault, it's just the way he's made and the way it works."

Right: Third place finisher Beach Patrol returns after the race. T.J. Comerford, assistant to trainer Aidan O'Brien said, "He's a decent horse and it's only his fifth start. He'll get better from this start. At the end of the day, he ran a good race. We know he gets the 1 1/4 well and thank God it didn't rain, so everything worked out well." 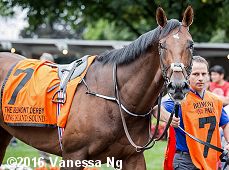 The $1 million Belmont Oaks Invitational (G1) featured 13 three-year-old fillies also going 1 1/4 miles in the inner turf, with the winner earning automatic entry into the Breeders' Cup Filly and Mare Turf under the BC Challenge "Win and You're In" promotion. Ballydoyle was sent off as the lukewarm 2-1 choice, 6th in the Prix de Diane (G1) after finishing second in the 1000 Guineas (G1). In to challenge her included Breeders' Cup Juvenile Fillies Turf (G1) winner and Canadian Horse of the Year Catch a Glimpse as the 7-2 second choice over 4-1 third choice Time and Motion, winner of the Memories of Silver and the Wonder Again. 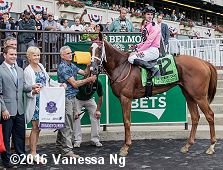 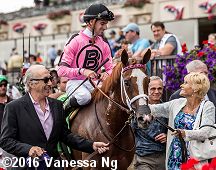 Left: Catch a Glimpse in the winner's circle. Norm Casse, assistant to winning trainer and father Mark said, "The 1 1/4 was a legitimate concern; she had never been beyond 1 1/16. Any time another horse comes to her, she finds another gear and she rewarded our confidence today. This has been a dream come true (winning at Royal Ascot with Tepin and a Grade 1, $1 million race with Catch a Glimpse). There's a lot of pressure. This morning I woke up and I was really nervous. But at the end of the day, it's what we wanted, and now we're getting a chance to achieve our dreams. It's very rewarding for Dad, and it's very rewarding for me. She'll definitely go up to Saratoga to train; I'm not sure what her next race will be. It's always been race to race with her."

Right: Owner Gary Barber leads Catch a Glimpse down Victory Lane. Winning jockey Florent Geroux said, "She broke very well from the gate and from there I just kept going as fast as I could. When I asked her to leave from home she gave me a good kick and was very brave all the way to the wire. She was the quickest of the race so it's not like I had an outside post with a horse with no speed. Speed is always dangerous no matter what the distance. Last year and this year, we've had trouble keeping her calm before the race. At the end, she gets bored and switches leads back and forth and goofs around but she is who she is, and we're not going to change anything because it's working." 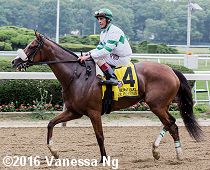 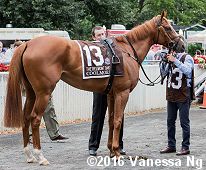 Left: Second place finisher Time and Motion returns after the race. Trainer Jimmy Toner said, "I thought they would press (Catch a Glimpse) a little bit more, but they didn't. Something happened with Coolmore at the break and I thought Harmonize might put on a little pressure since they put the blinkers on her. I don't know. We gave it a try. She was too far in front."

Right: Third place finisher Coolmore in the paddock before the race. The Aidan O'Brien trainee improved her record to 1 win, 1 second, and 2 thirds in 8 starts, earning $231,593 for owners Michael Tabor, Mrs. John Magnier, and Derrick Smith. 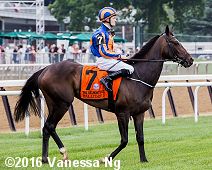 The last race of the card was the $400,000 Belmont Sprint Championship (G3), featuring a field of just 7 older horses going 7 furlongs on the main track. Last year's winner and Breeders' Cup Sprint (G1) runner-up Private Zone was sent off as the 6-5 favorite over 5-2 Marking, fourth in both the Godolphin Mile (G1) and Metropolitan (G1), and 3-1 Ready for Rye, third in the Jaipur (G3).

Jockey Martin Pedroza sent Private Zone to the front through fractions of 22.66 and 45.33 while pressed by Marking and stalked by 33-1 Green Gratto. Entering the lane Private Zone tired as 6-1 fourth choice A.P. Indian, 4th early, swept to the lead 3 wide through 3/4 in 1:08.81. Marking attempted to close 5 wide but A.P. Indian held him off by a head in 1:21.41 over the fast track. It was a long 4 1/4 lengths back to late-running Ready for Rye third, and another 1 1/2 to favorite and pacesetter Private Zone fourth. 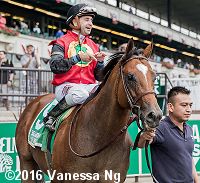 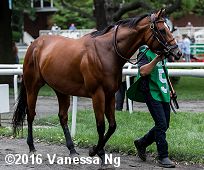 Left: A.P. Indian in the winner's circle. Winning trainer Arnaud Delacour said, "Well, obviously it was a huge performance. We thought about coming to run in this race last year but he ran into some minor issues and we couldn't make the race. He's come back very well this year. I usually leave the options open to the rider and Joe did a great job keeping him covered up and he extended away in the stretch. Going forward I'll definitely take a look at the races at Saratoga and we'll keep our options open but we'll first see how he comes back form this race first."

Right: A.P. Indian in the post parade. Jockey Joe Bravo said, "Horses like this make our job so easy. He breaks from the gate with control, relaxes, turns off and breathes underneath me so comfortably that all you have to know is when to pull the trigger. He really opened up beautifully turning for home and made me look good." 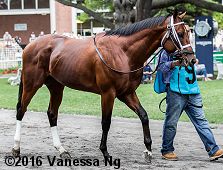 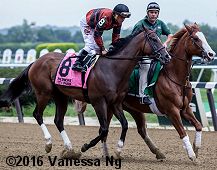 Left: Second place finisher Marking in the paddock before the race. The Kiaran McLaughlin trainee improved his record to 3 wins, 2 seconds, and 0 thirds in 8 starts, earning $426,200 for owner-breeder Godolphin Racing.

Right: Third place finisher Ready for Rye in the post parade. The Tom Albertrani trainee improved his record to 5 wins, 4 seconds, and 5 thirds in 15 starts, earning $634,760 for owner Chalk Racing. 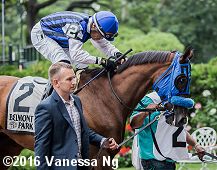 Fourth place finisher Private Zone heads out to the track before the race. The Brian Lynch trainee has a record of 10 wins, 9 seconds, and 3 thirds in 33 starts, earning $2,924,620 for owner Good Friends Stable.