The $1 million Breeders' Cup Juvenile Fillies Turf (G1) featured a field of 14 two-year-old fillies going 1 mile on the Haggin turf course at Keeneland. Tattersalls Millions 2yo Fillies Trophy winner Alice Springs was sent off as the 3-1 favorite over 9-2 Harmonize, winner of the Jessamine (G3), and 5-1 Illuminate, second in the Cheveley Park (G1) after winning the Duchess of Cambridge (G2) both at Newmarket. 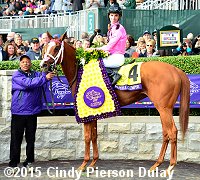 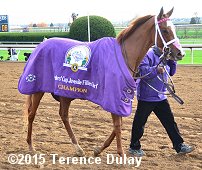 Left: Catch a Glimpse in the winner's circle. Winning trainer Mark Casse, celebrating his first Breeders' Cup win with his 26th starter, said, "This game is about dreams. So when you buy a horse, the dream is always the Breeders' Cup, the Kentucky Derby, those races. So yes, she showed a lot. We had her here this spring and she showed she was a little better than average. That's why she ended up at Saratoga. But when did I really think we could win the Breeders' Cup? After she was so impressive in the Natalma. I hadn't really given much thought about that. I'm a guy that kind of like goes from one race to the other. Sometimes I get along, but I wanted her to show me she was that good."

Right: Catch a Glimpse heads back to the barn after the race. 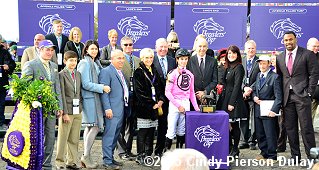 The trophy presentation for the Juvenile Fillies Turf. Winning owner Gary Barber, also celebrating his first Breeders' Cup win, said, "Flo (Geroux, jockey) did a masterful job of just pulling back and then getting to the outside. Once she got into a comfortable stride on the outside, the time, I think was 24 and 2. It was reasonable time. And when we got to the four turn and coming home, I felt really good, and she got to the lead. When she's on the lead, she's tough." 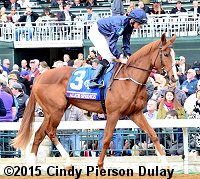 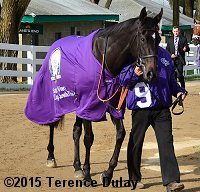 Left: Second place finisher and beaten favorite Alice Springs warms up on the main track before the race. Trainer Aidan O'Brien said, “She ran really well. Maybe it was too soft for her.". Jockey Ryan Moore refused comment.

Right: Third place finisher Nemoralia walks over before the race. Trainer Jeremy Noseda said, “She ran a great race. Maybe she was a bit unlucky. Who knows? As soon as it rained, I gave up all hope. Some you lose, but that’s racing." Jockey Joel Rosario added, “She relaxed beautifully, she was very comfortable and did everything I asked her to do. Turning for home I took them outside and she had a good finish. We were just a little short today. She started running again. (Winner Catch A Glimpse) and (2nd place Alice Springs) were just a little tougher."

The fillies break from the starting gate for the Breeders' Cup Juvenile Fillies Turf. Florent Geroux aboard winner Catch a Glimpse (number 4, post 3) said, “She broke very sharp. The only speed in the race was (Ruby Notion) and I had to make sure to keep my position, but not go head-to-head with her. I was shut off and I had to steady a little bit in the first turn, but I took a hold and let (Ruby Notion) go. Then, when I was outside of her, (Catch a Glimpse) settled really nicely. In the stretch I had plenty left and I was pretty confident. She gave me a good run. I'm 100%, two-for-two (in the Breeders' Cup), but we still have a few more. It feels great."