The first race of the 2015 Championships was the $1 million Breeders' Cup Juvenile Turf (G1), a 1 mile test around 2 turns of the 7 1/2 furlong Haggin Turf Course at Keeneland. Airoforce was sent off as the 5-2 favorite in the field of 14 off his win in the Bourbon (G3) at Keeneland, over 5-1 second choice Cymric, runner-up in the Prix Jean-Luc Lagardere Grand Criterium (G1) at Longchamp, and 7-1 third choice Hit It a Bomb, winner of the Star Appeal Stakes at Dundalk. 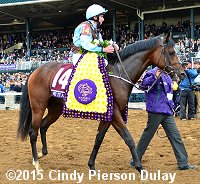 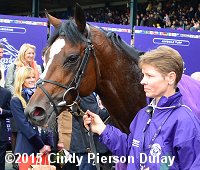 Left: Hit It a Bomb heads into the winner's circle. Winning jockey Ryan Moore said, "The ground was really loose and my horse was uncomfortable and had a hard time finding his footing. Once he settled and found his footing he got into the race and came running."

Right: Hit It a Bomb heads back to the barn after the race. 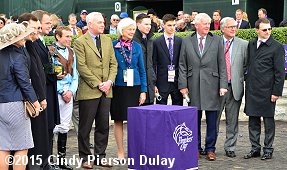 The trophy presentation for the Juvenile Turf with trainer Aidan O'Brien on the far right. O'Brien said, "Ryan said he was drawn 14, so he was going to leave him relaxed the first half of the race and he was going to walk it out from there. It was going to depend on where he was really. Then, it was whether he was going to get there or not. We've seen it so many times. He gave a marvelous ride, let him relax early and came along smooth. I was very worried in that ground the horse wouldn't make up enough ground, he couldn't get there. Obviously, he did." 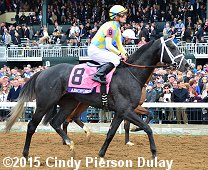 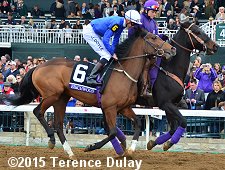 Left: Second place finisher and beaten favorite Airoforce returns after the race. Trainer Mark Casse said, "At first he wasn't running at all and I was really concerned then he kicked in. I thought he might win it. All you can ask for is for them to run their race and I'm proud of them both (Airoforce and stablemate Conquest Daddyo, 4th). I sure would have liekd to win. We'll win one (Breeders' Cup race) someday." Casse gets his wish in the Juvenile Fillies Turf an hour later.

Right: Third place finisher Birchwood in the post parade. Jockey James Doyle said, "They were going a bit quick and I was a bit keen around the first turn. I had a good trip, can't complain. I got pushed 3 wide early on to stay right on to heels, I just had to ease him into a bit of space so I had a good trip down the stretch and didn't get stopped. The horse finished off really well, I'm really placed. This is very similar to the grass we have at home (England) this time of year."