The first of three championship turf races on Saturday was the $2 million Breeders' Cup Filly and Mare Turf (G1) with 10 older fillies and mares going 1 3/16 miles over the Haggin turf course. Legatissimo was sent off as the 9-10 favorite off her wins in the Nassau (G1) at Glorious Goodwood and the Matron (G1) at Leopardstown.. In to challenge her included 5-1 Dacita, winner of the Ballston Spa (G2) at Saratoga, and 7-1 Stephanie's Kitten, last year's runner-up and coming here off her Flower Bowl (G1) win at Belmont. 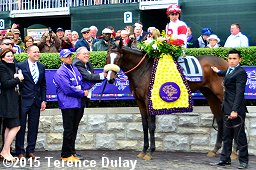 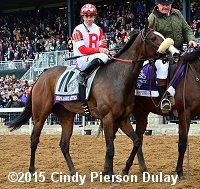 Left: Stephanie's Kitten in the winner's circle. Winning trainer Chad Brown said, "A really strong field. Legatissimo, particularly, we have a lot of respect for and some other ones that were in there just had fantastic form from Europe. It's a real spirit of the Breeders' Cup, international competition at its finest. On this day, it was a Kentucky bred horse, just miles from where she was born, that came out victorious. And I just think it's a great story. She beat all the best today."

Right: Stephanie's Kitten returns after the race. Jockey Irad Ortiz Jr. said, "I broke from the outside so I was trying to save some ground. I found a hole to go through around the quarter pole and then when I asked her she just took off." 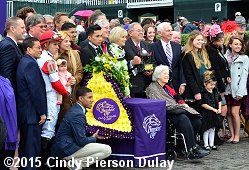 The trophy presentation with owners Ken and Sarah Ramsey and Kentucky Governor Steve Beshear. Ken Ramsey said, "These Kitten's Joys come from last to first. I was a little bit concerned when I saw her back that far. But last to first. Great ride by the jockey, used his smarts. He's going to be in the Hall of Fame himself. This Irad Ortiz is really a good jockey. He's right up there with John Velazquez, Javier Castellano and all the good ones that are running up there in New York now. What can I say about the mare that hasn't already been said? She's had a tough luck career. There's lot of seconds on there that could have been won. Just a head bob or two or a little more pace in the race. Today, she went out in a blaze of glory. We're very proud of her." 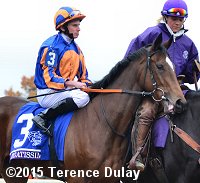 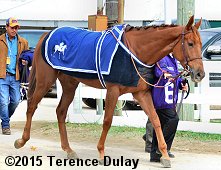 Second place finisher and beaten favorite Legatissimo in the post parade. Trainer David Wachman said, "She ran a good race, but she’s had a long season. I was pleased with her run. She met a good horse today. No excuses."

Right: Third place finisher Queen's Jewel walks over before the race. Jockey Maxime Guyon said, "She needs a bit more time to keep up with pace and find her stride. She struggled a bit on the turns, but made up a lot of ground on the straight."