The $2 million Breeders' Cup Mile (G1) featured a field of 12 older horses going 1 mile around 2 turns of the Haggin turf course at Keeneland. Prix le Parisien (G1) and Prix de la Foret (G1) winner and 3-year-old filly Make Believe was sent off as the 5-2 favorite. In to challenge him included 4-1 second choice 5-year-old mare Esoterique, winner of the Sun Chariot Stakes (G1) and 5-1 third choice Tepin, winner of the First Lady (G1) as a 4-year-old filly. Note that despite the race being open to older horses of both genders the top three favorites are all distaffers. 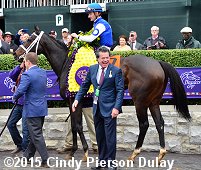 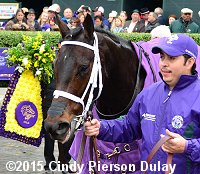 Left: Tepin in the winner's circle with owner Robert Masterson. Masterson said, "I told everyone that she was the best filly in the country and she proved it today. She's great. She's a Breeders' Cup champion and she deserves it."

Right: Tepin heads back to the barn. Winning trainer Mark Casse said, "I said to Norman (son and top assistant) after Stephanie's Kitten's performance today (in the Filly and Mare Turf) that if (Tepin) is going to be champion Turf Mare, she's going to have to win today. I whispered that in her ear. To be in the same company with Goldikova, Miesque, Six Perfections, and Royal Heroine, beating the boys in the mile, I'm not sure I have the words. Am I dreaming? She just continues to amaze me. I'm still in shock (at how easily she won and by how many lengths) so I'll have to watch the race a few more times, and then I'll be even more surprised. I can't put it into words what great work Norman did with this horse. It's special. He worked really hard with her." 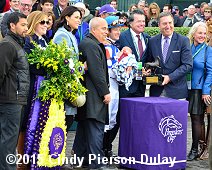 The trophy presentation with trainer Mark Casse to the left of jockey Julien Leparoux. Leparoux said, "She broke well like she always does. I was surprised actually to be on the lead around the first turn. I thought that Obviously would be there already. He came across on me and I couldn't get out. As soon as I pulled, she was great, she just relaxed. On the backside, I was very confident." 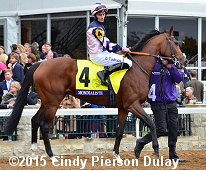 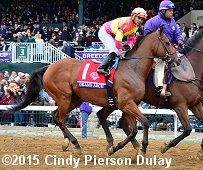 Left: Second place finisher Mondialiste in the post parade. Trainer David O'Meara said, "I'm over the moon. He was struggling for a while and we got a b it short of room. But, he didn't have it coming down the stretch. He's improving all the time and has even improved from his last run in Canada (Woodbine Mile). I'm really, really pleased." Jockey Daniel Tudhope added, "He traveled great for most of the way and everything nearly went according to plan. I had to wait for the gaps and he picked up incredibly well."

Right: Third place finisher Grand Arch in the post parade. Jockey Luis Saez said, "Got a good break and we got some good position early. The horses in front of me seemed to be going slow and he was wanting to run off with me. But he settled and kept on running. In the stretch, he was perfect, but the winner was going too fast to catch." 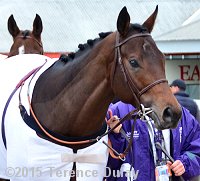 Beaten favorite and fifth place finisher Make Believe walks over before the race. Jockey Olivier Peslier said, "Disappointing really. Last time at Longchamp, he gave me a great kick. This time, he traveled well for me, but found no kick today. Maybe it was the ground."