As expected "rabbit" Shining Copper (stablemate of Big Blue Kitten) sprinted clear of the field soon after the start, and set fractions of 24.56, 48.38, 1:12.64, and 1:39.07 while as many as 20 lengths in front of 151-1 longest shot Cage Fighter in second, in turn 2 lengths ahead of Golden Horn stalking him in third. At the top of the stretch for the last time, Shining Copper clocked 1 1/4 mile in 2:07.20 and was dropping from contention along with Cage Fighter, as Golden Horn easily inherited the lead. However, 13-2 fourth choice Found, who was 6th early, rallied late to win by 1/2 a length in 2:32.06 over the good course. It was another 3/4 length back to late-running Big Blue Kitten third. 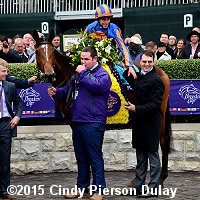 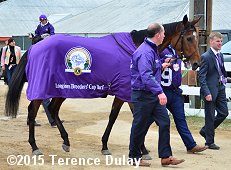 Left: Found in the winner's circle. Winning jockey Ryan Moore said, "She is very tough filly. To run in Champion Stakes and the Arc and to come on here is amazing. She beat a champion (Golden Horn) and that is special too. I had to go around one and then I had to go."

Right: Found walks over before the race. Co-owner M.V. Magnier said, "Ryan said that she's exceptional and so what can I say? Ryan gave her a fantastic ride. Aidan has done an unbelievable job keeping her going. And (sire) Galileo, I don't know what more to say about him." 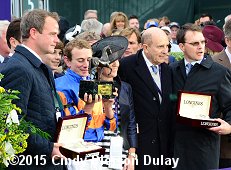 The trophy presentation with owner Michael Tabor and trainer Aidan O'Brien on the right. O'Brien said, "We trained her, kept her a mile earlier in the year with a view to giving her a break in the middle and then training her for the Arc. Everything went well for the Arc, but she just didn't have much look and went to the line on the bridle. So we came back to the Champions Stakes. She was drawn badly, but came out of the race really well. Like I say, the lads made a decision to run. I thought it was a little bit far-fetched, like she was a 3-year-old filly after running in two Champion Stakes and an Arc within a month. But she didn't have any look in any of the races. She's very special filly." 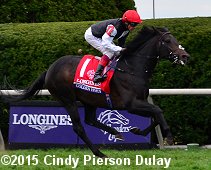 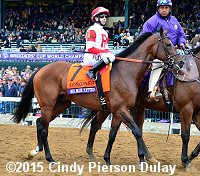 Left: Second place finisher and beaten favorite Golden Horn racing in third place first time by, over 20 lengths behind the rabbit Shining Copper. Trainer John Gosden said, "We always knew we were taking a risk running on ground like this that is softer than anything he's run on before. Take nothing away from the winner. She's a very good filly, and the best turf horse in America has finished third, Our horse has run a terrific race on ground that didn't suit him." Jockey Frankie Dettori added, "(The turf) was just too loose for him. He ran a great race though. He was laboring from the top of the stretch."

Right: Third place finisher Big Blue Kitten in the post parade. Trainer Chad Brown said, "Disappointed they didn't win, but man, those four horses on the wire together are four very good racehorses. I'm really proud of the effort my two horses put in. I'm so proud of them at age seven to be running as good as ever. I can tell you those two horses ahead of them, Found and Golden Horn, they weren't backing up either. They were flying through the lane. So it's hard to make up ground on horses that are that talented and finishing that strong at 1 1/2. What a terrific horse race!"