A full field of 14 older horses contested the $1 million TwinSpires Breeders' Cup Turf Sprint (G1) going 5 1/2 furlongs around one turn of the Haggin turf course. Undrafted was sent off as the 7-2 favorite, winner oft he Diamond Jubilee (G1) at Royal Ascot but 2nd in the More Than Ready last out at Kentucky Downs. In to challenge him included 9-2 Lady Shipman, winner of the Smart N Fancy before second in the Franklin County, and 11-2 Pure Sensation, winner of the Turf Monster (G3) at Parx.

13-2 Ready for Rye contested the pace with 16-1 Mongolian Saturday through fractions of 22.19 and 45.09 while stalked by Lady Shipmam amd 48-1 Jimmy Bouncer. Entering the stretch, Mongolian Saturday broke free from the pack by 2 lengths through 5/8 in 57.15. Lady Shipman put in a strong 5 wide rally but Mongolian Saturday held her off by a neck in 1:03.19 over the good course. It was 1/2 a length back to 7-1 Green Mask third, while Undrafted was 5th. 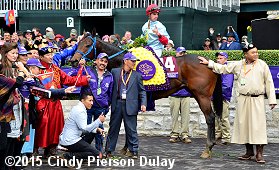 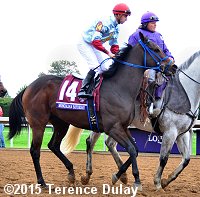 Left: Mongolian Saturday in the winner's circle. Trainer Enebish Ganbat said, "In Mongolia, we have 25 kilometer (15 mile) races. This (Turf Sprint) is (about) one kilometer. It's sort of different. But to understand it, I spent four years. And from last year, I begin to understand this is how to feed, how to train, how to breed. It's totally different. Mongolian people are horsemen people. We know a little bit about what horses feel. Need to feel, contact horse very good.This year we really wanted to participate in the Breeders' Cup."

Right: Mongolian Saturday went out early for the post parade. Winning jockey Florent Geroux said, "Coming from the 14 hole, you need to establish your position pretty quickly. And don't wait too long to make your decision. From there, my horse broke very sharply, and lightly, and I was about to be in good position right off the bat. And come the turn, I was only like second position. My horse was nice, relaxed, and when I asked him turning for home, he shows a lot of heart and give me a very good kick. So he's a very nice horse. I've been trying to get on this horse for quite a few time. Those people are also a fan of mine because they're based in Arlington Park." 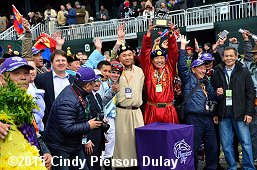 The trophy celebration with trainer Enebish Ganbat (beige) and owner Ganbaatar Dagvadorj (red) of Mongolian Racing. Davdadorj said, "It's been an honor to participate in this big event. And for us, it's a big dream as Mongolians to participate in this big event. And as a Mongolian, we ride horses starting at age four. So, yeah, it's our tradition just to raise with the horse. Being a Mongolian, it's part of our tradition. 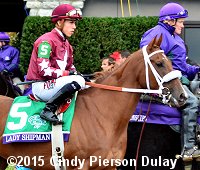 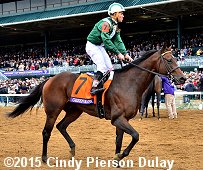 Left: Second place finisher Lady Shipman in the post parade. Trainer Kathleen O'Connell said, "That was such a tough beat, but she ran her heart out. For a 3-year-old filly to come in second and with all she's accomplished, we are very, very proud of her. She came so close, but we're still very happy with her."

Right: Third place finisher Green Mask returns after the race. Jockey Joel Rosario said, "He ran very good. He made a big move and I thought he might get there in time, but the others didn't quite come back to me." 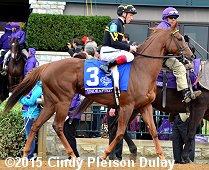 Fifth place finisher and beaten favorite Undrafted in the post parade. Jockey Frankie Dettori said, "The ground was not fast enough for him and he needs 6 1/2 furlongs, not 5 1/2 furlongs. My horse is not quick enough with them and I was last and I ran on. He's getting older and losing a bit of speed, but, we might get into Ascot next year."