The feature race at Belmont Park on Saturday was the $400,000 Man o'War Stakes (G1), a 1 3/8 mile inner turf contest for older horses, contested over firm going under overcast skies and temperatures in the mid 60's. Wake Forest was sent off as the 2-1 favorite in the field of 9, second in the Pan American Handicap (G2) after finishing a distant 6th in last year's Arlington Million (G1). In to challenge him included 4-1 second choice Kaigun, second in the Elkhorn (G2) after winning the Pan American Handicap, and 9-2 third choice Morandi, fifth in an allowance last out at Keeneland and winless since the 2012 Criterium de Saint-Cloud (G1) as a juvenile. 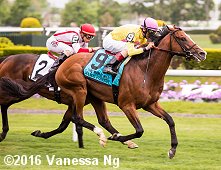 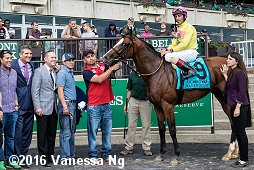 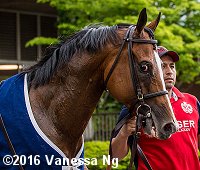 Left: Wake Forest in the winner's circle. Winning trainer Chad Brown said, "Getting a race under his belt, running such a hard race coming off a layoff and then having six weeks helped. The whole thing came together nicely. Everything worked out for this horse today. He's got a lot of talent, Grade 1 talent. I think he can cut back further in the Manhattan. I have to see what group of horses that I would point towards there, but this horse would be at the top of the list.

Right: Wake Forest heads back to the barns after the race. 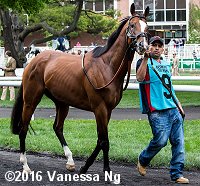 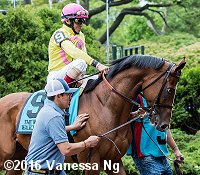 Left: Wake Forest in the paddock. Winning jockey John Velazquez said, "It was a perfect trip. We know he doesn't break really well, so it was a perfect opportunity to put him behind horses and save ground and hopefully, down the lane, we'd get some sort of seam where we could let him run. When he got the little seam he just exploded."

Right: Wake Forest heads out to the track before the race. 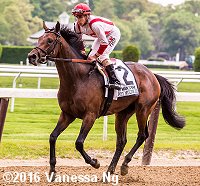 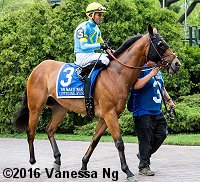 Left: Second place finisher Money Multiplier returns after the race. Trainer Chad Brown said, "He is a bit one-paced. His only chance was to go out there and be forwardly placed and use his stamina to his advantage. He's got a lot of stamina. Irad (Ortiz) used good judgment on the backside not letting Go Around get away too far. He gave way grudgingly down the lane. He's a top horse, too."

Right: Third place finisher Can'thelpbelieving heads out of the paddock. The 12-1 shot stalked the pace in third under Joel Rosario but could not improve, finishing third beaten 1 3/4 lengths. The Graham Motion trainee improved his record to 3 wins, 5 seconds, and 3 thirds in 15 starts, earning $228,407 for owner Albert Frassetto.


The second stakes race on the card was the $150,000 Beaugay Stakes (G3) for older fillies and mares going 1 1/16 miles on the Widener turf course. My Miss Sophia was sent off as the 9-5 favorite in the field of 8, unraced since third in the Ballston Spa (G2) and First Lady (G1) last year. In to challenge her included 2-1 second choice Recepta, 5th in the Jenny Wiley (G1) after finishing 12th in the Breeders' Cup Mile (G1), and 9-2 third choice Ball Dancing, 8th in the Hillsborough (G2) after 8th in last year's Just a Game (G1). 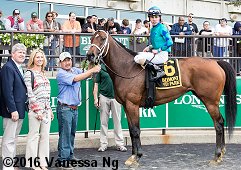 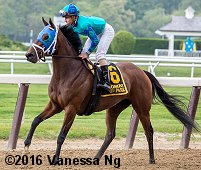 Left: Strike Charmer in the winner's circle. Winning trainer Mark Hennig said, "She broke sharp and I was happy with the pace. She really kicked well and I thought she put in a strong finish. She looks like a filly that's coming the right way. She's showing it too. She's never had a good hair coat her whole life, but now she does. We made some changes shoeing-wise. She's a happy horse right now. We'll take it one race at a time. We didn't know if we were going back to listed races or going forward. We won't go looking for Tepin, but we'll find a spot."

Right: Strike Charmer returns after the race. Winning jockey Irad Ortiz Jr. said, "She broke so good, I thought I was going a little fast. I tried to wait as long as I could and I thought the pace in front of me was going quick. When I asked her, she was there for me. Mark has done a great job with her, she was ready. She's nice. I rode her last time and I won on her and she won again with me today, so I guess she likes me, and I like her too." 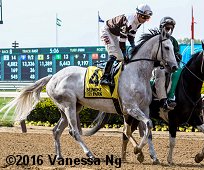 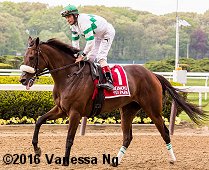 Left: Second place finisher Tapitry in the post parade. The 7-1 shot pressed the pace second under Jose Ortiz, led in the stretch but could not hold off the winner. The Shug McGaughey trainee improved her record to 3 wins, 3 seconds, and 2 thirds in 11 starts, earning $223,200 for owners Gainesway Stable and Andrew Rosen.

Right: Third place finisher Recepta returns after the race. The 2-1 second choice was 12 lengths off the pace in last early under John Velazquez then rallied to get third beaten 2 3/4 lengths. The James Toner trainee improved her record to 5 wins, 1 second, and 4 thirds in 15 starts, earning $466,700 for owners Phillips Racing Partnership and Pam Gartin. 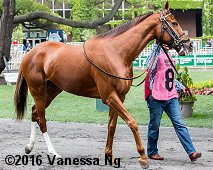 Fourth place finisher and beaten favorite My Miss Sophia in the paddock before the race. The 9-5 choice was loose on the lead under Joel Rosario but tired late to check in fourth beaten 5 3/4 lengths. The Bill Mott trainee has a record of 3 wins, 2 seconds, and 2 thirds in 12 starts, earning $605,040 for owner Alpha Delta Stables.