The feature race on the first Sunday of the Saratoga meeting is the $300,000 Coaching Club American Oaks (G1), featuring some of the top 3-year-old fillies going 1 1/8 miles, one complete lap of the main track. Conditions were excellent with sunny skies and temperatueres in the low 80's. As expected, undefeated 2015 champion juvenile filly Songbird was sent off as the 3-10 favorite, off wins in the Santa Anita Oaks (G1) and Summertime Oaks (G2) both at Santa Anita. In to challenge her included 2-1 second choice Carina Mia, winner of the Eight Belles (G2) and Acorn (G1), and 11-1 Weep No More, 7th in the Acorn (G1) after winning the Ashland (G1). Due to the presence of the heavily favored champion, there was no show wagering on the race.

Jockey Mike Smith sent Songbird to the lead immediately and she set fractions of 23.86, 47.52, and 1:11.63 over the fast main track while pressed by Carina Mia and stalked by 22-1 Mo d'Amour. Entering the lane Songbird began to pull away, opening up a 2 length lead midstretch through 1 mile in 1:36.02. Kept to task by Smith, Songbird drew off to win by 5 1/4 lengths, stopping the timer in 1:49.56. It was another 4 lengths from Carina Mia to late-running 63-1 longest shot Flora Dora third. 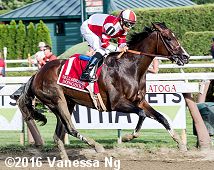 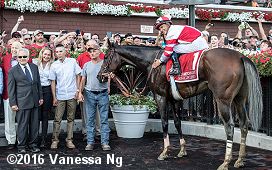 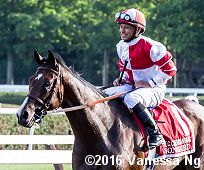 Left: Songbird in the winner's circle. Winning trainer Jerry Hollendorfer (gray suit) said, "We thought we were going to get tested and we thought Julien (Leparoux) would send Carina Mia at us early, which he did. We got a chance to test our filly and she dug in. We came here because we thought these two races here would fit into our program if we could do it. We had a good trip over and got lucky and prevailed, so we're very pleased to win the race. I'm not superstitious. I was trying to think positive. This is a very difficult place to win races, and that's because there are great horses and great trainers here."

Right: Songbird returns after the race. Winning jockey Mike Smith said, "I knew at some point that Carina Mia was going to give me a serious test, an acid test, and she did - she made her do something she never had to do before. We'll see what happens. A lot of times, a true champion, this will move them up. This was the first time someone got inside of her gut. A lot of times it'll really move them up, and if that happens, oh my. If this race moves her up like I think it will, there's no telling how good this filly is." 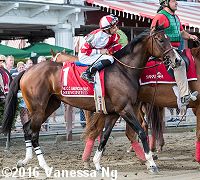 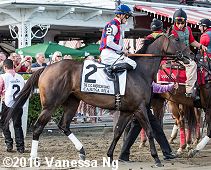 Right: Second place finisher Carina Mia heads out for the post parade. Trainer Bill Mott said, "She ran well. I mean, she did what we asked her to do, she laid close. We took it to her leaving the three-eighths pole; it looked like when they turned from home we were in for the shot, but the other filly had a little too much left. She's definitely has some stamina that the others don't. She's a top filly and I'm definitely impressed. I don't think it's any disgrace or embarrassment to run second to Songbird. We tried her and we had our chance and we have no excuse, she was doing great going into it. She ran the way we envisioned it, we couldn't have written this out on paper any better." 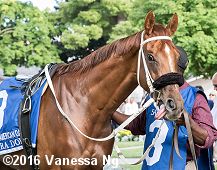 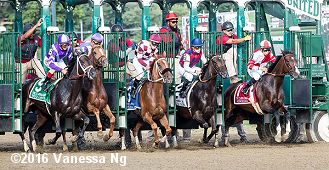 Left: Third place finisher Flora Dora in the paddock before the race. The 63-1 longest shot rated in 4th 7 lengths off the pace under Emmanuel Esquivel, then passed tired fillies to finish third beaten 9 1/4 lengths. The Marialice Coffey trainee improved her record to 2 wins, 2 seconds, and 1 third in 10 starts, earning $496,582 for owner Coffeepot Stables.

Right: The fillies break from the gate for the Coaching Club American Oaks. Winning jockey Mike Smith added, "I asked her more than I've ever had to. I take my hat off to Carina Mia, she made her run a little bit. But once I got going, I was comfortable. This is a tough place to just step into town - especially when you're coming from the west coast, the humidity factor is what it is; the air is so much thicker here. It gets to me as a rider, so I can't imagine a horse. She's very young yet, she has a lot left to do. She's so special, but I don't want to stop and think about it because it scares me. I don't want to let up. I want to keep my nose to the grindstone. We've got a job to do."