The major California prep race for the Triple Crown is the $1 million Santa Anita Derby (G1) for 3-year-olds going 1 1/8 miles over the Santa Anita main track just 4 weeks before the Run for the Roses, and worth 100 points in the Kentucky Derby Championship Series. Conditions were less than ideal at the historic Arcadia oval, with 27,821 fans braving the rainy weather with temperatures in the low 60's, leaving the main track sloppy and the turf course yielding on Saturday afternoon. A field of 8 (after 2 scratches) went to post, with Robert Lewis (G3) winner Mor Spirit sent off as the 7-5 favorite off his second place finish in the San Felipe (G2). In to challenge him included 8-5 second choice Danzing Candy, winner of the San Felipe, and 7-2 third choice Exaggerator, third in the San Felipe after finishing second in the San Vicente (G2).

Jockey Mike Smith sent Danzing Candy to a clear lead first time by and he set fractions of 22.15, 45.24, and 1:10.12 while as many as 3 lengths in front of 26-1 Uncle Lino and 15-1 Smokey Image. On the far turn, Danzing Candy tired from the fast pace as Exaggerator, 7th early, came out 3 wide for room and swept to the lead through 1 mile in 1:36.30. Kept to task by jockey Kent Desormeaux, Exaggerator drew off to an impressive 6 1/4 length victory over late-running favorite Mor Spirit in 1:49.66 over the sealed sloppy track. It was another 2 1/4 lengths back to Uncle Lino third. 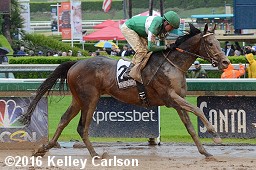 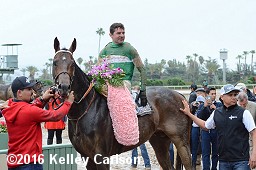 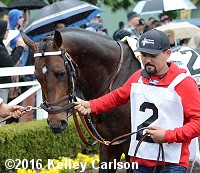 Left: Exaggerator in the winner's circle. Winning trainer Keith Desormeaux said, "We had a good pace to run at in the San Felipe, but not a really fast pace. Today, we had a great pace scenario and he took full advantage. For me, this is like a dream. I mean, the (Kentucky) Derby is what everybody in this business dreams of. We'll probably come in (to Churchill Downs) right on top of the race, maybe ship in on Monday or Tuesday."

Right: Exaggerator in the paddock. Winning jockey Kent Desormeaux said, "If he shows up the first Saturday in May like he did today, he was ultra-confident today. He's so mature and he walked to the gate like an old pony. Exaggerator felt like he had track shoes on. He really liked the going and I think that was part of his incredible effort today. He enjoyed the mud. He left there quiet and comfortable and I think that's the difference, when a horse lets you drive and they're not man-handling themselves. He reminded me of Texas Red." 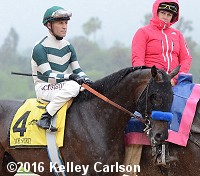 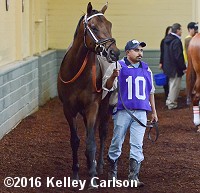 Left: Second place finisher Mor Spirit in the post parade. Jockey Gary Stevens said, "He warmed up great and left the gate wrong, and we got hit by the first wave of water and mud going into the first turn, he slipped with me and started lunging. He came off the bridle, and the first thing I said was, ‘This is going to be a long race.' When Kent came by me, he actually tried to go with him – he sort of re-ignited again, but he sort of just looked after himself."

Right: Third place finisher Uncle Lino in the paddock. Trainer Gary Sherlock said, "The track didn't make him run any better but I wasn't worried about it. The biggest thing was to let him run. He ran perfect, that's what we had in mind. The only thing that fooled me was that Iron Rob didn't send! Uncle Lino made the lead and just got run down by two pretty good horses, that's about it. 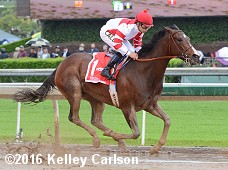 The $400,000 Santa Anita Oaks (G1) featured a field of seven 3-year-old fillies going 1 1/16 miles with the winner earning 100 Kentucky Oaks Championship Series points. As expected, undefeated Songbird was sent off as the 1-10 favorite in the field of 6 off wins in the Breeders' Cup Juvenile Fillies (G1), Las Virgenes (G2), and Santa Ysabel (G3). In to challenge the 2015 champion juvenile filly included 6-1 second choice Bellamentary, making her stakes debut off 2 straight allowance wins, and 14-1 Mokat, third in the Santa Ysabel.

Jockey Mike Smith put Songbird on the lead first time by and she set fractions of 23.34 and 47.17 while pressed by 25-1 Forever Darling and stalked by Bellamentary. On the far turn, Songbird began to pull away from the pack, opening up a 4 length lead through 3/4 in 1:11.21. Into the stretch, Songbird extended her lead to 6 lengths through 1 mile in 1:37.13. Mokat, fourth early, put in a strong late rally but Songbird easily finished 3 3/4 lengths in front in 1:44.14. It was just a neck back to 22-1 She's a Warrior third. 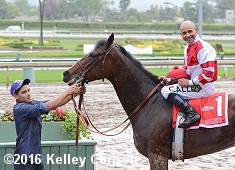 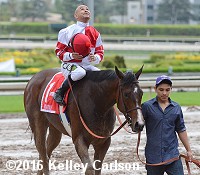 Left: Songbird in the winner's circle. Winning trainer Jerry Hollendorfer said, "I had a little bit of anticipation with the off track, wondering if she could handle it or not. We didn't want her slipping, but she didn't slip, so that's good. She's always been well thought of and she's done everything we've asked her and we thought she would do that today. We have the (Kentucky Oaks) coming up, so if we have good fortune and she stays sound, we'll try to go to Kentucky and win that one." Owner Rick Porter added, "We've found that most really good horses can handle any kind of surface – today, she didn't show us anything different. It's so exciting to see the horse perform time after time unasked. I'm so fortunate to have a horse like this."

Right: Songbird returns after the race. Winning jockey Mike Smith said, "I feel so blessed and I keep pinching myself, having to remind myself that I'm the one that gets to keep the weight on her. That's really all I do. She's so professional, so good at everything. She was spinning her wheels a little bit going into the first turn but once we got to the backside, she found her rhythm and she got comfortable and it was all her again." 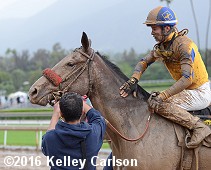 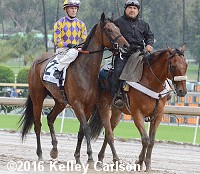 Left: Second place finisher Mokat returns after the race. Jockey Flavien Prat said, "She ran great. I mean, that was the game plan, to try to win second which is what we did. I think she ran really good, it's just that the winner was just way too good for her. But I am really impressed with her and the way she ran today."

Right: Third place finisher She's a Warrior in the post parade. The 22-1 shot raced 5th early under Gary Stevens then rallied to get third beaten 1 3/4 lengths. The Peter Eurton trainee improved her record to 0 wins, 3 seconds, and 3 thirds in 6 starts, earning $120,800 for owner CRK Stable. 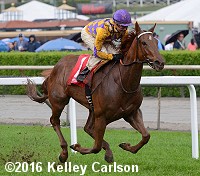 Kicking off the stakes action on Saturday, the $150,000 Providencia Stakes (G3) featured 3-year-old fillies going 1 1/8 miles on the turf. China Doll Stakes runner-up Lady Valeur was sent off as the 2-1 favorite in the field of 9 over 3-1 second choice Decked Out, third in the Sweet Life Stakes, and 7-2 third choice Nodiac, third in the China Doll. 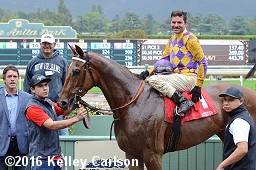 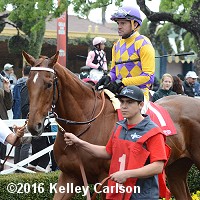 Left: Decked Out in the winner's circle. Winning trainer Keith Desormeaux said, She doesn't want to be pushed on, she wants to sit chilly and let her do it on her own, and that's what Kent did. He never moved on her the whole race. All he does is point her in the right direction. It's just been the switch to turf that's turned her around. It only took us about eight races to figure out that we should try the grass, and really, that's been the biggest reason."

Right: Decked Out in the walking ring before the race. Winning jockey Kent Desormeaux said, "I wouldn't compare the journey (today) to her mental progress. The reason she had that trip, last time, was because I had to bury her, she wanted the race Quarter Horse style. She's been that way since the first day she's run. Now, she's matured. She's letting me drive, instead of wanting to go (all) out." 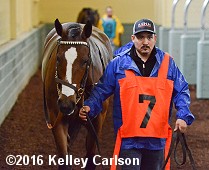 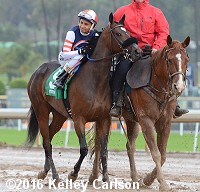 Left: Second place finisher Jeremy's Legacy in the paddock before the race. The 19-1 shot pressed the pace under Mario Gutierrez, led at the 1/8 pole but could not hold off the winner. The Doug O'Neill trainee improved her record to 1 win, 2 seconds, and 0 thirds in 8 starts, earning $78,657 for owners Bada Beng Racing, Great Friend Stable, and Head of Plains Partners.

Right: Third place finisher Nodiac in the post parade. The 7-2 third choice was 7th early under Rafael Bejarano then rallied to get third beaten 2 1/3 lengths. The Phil D'Amato trainee improved her record to 1 win, 2 seconds, and 3 thirds in 6 starts, earning $88.181 for owners Little Red Feather Racing and Marsha Naify. 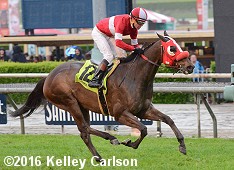 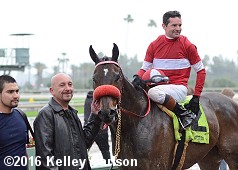 The last of four graded stakes on the card was the $100,000 Thunder Road Stakes (G3) for older horses going 1 mile on the turf. California Cup Turf Classic winner What a View was sent off as the 9-10 favorite in the field of 11 off his win in the Frank Kilroe Mile (G1) over 3-1 Twentytwentyvision, unraced since second in the Eddie Read (G1) and winning an allowance at Del Mar, and 13-2 Finnegans Wake, winner of last year's Woodford Reserve Turf Classic (G1) but third in the Eddie Read.

Winning trainer Ken Black said, "There was no speed in the race, and he's sitting fifth or sixth and three off him. I would have bet every dime I had that he'd be on the lead when he turned down the backside. I think this horse will run longer if we want him to." Jockey Kent Desormeaux added, "He was coming off the bridle today, there's no way in the last month or two that he let me ride him like he let me ride him today. He can obviously run and the time on the track shows you how tough the going is today. He ran a mile in 1:35 last time and he stuck his neck out and got a mile in 1:39 today. True champion, heart of a champion." 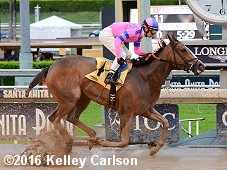 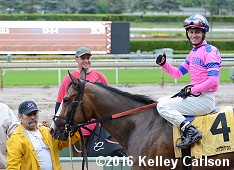 Winning trainer Joe Ciaglia said, "She won at Del Mar, she won on the grass, she won the dirt, she won going short, she won going long – so she's very versatile. She's got a lot of talent. We might wait two months and go to the Acorn Stakes." Jockey Flavien Prat added, "I prefer a fair track. She wasn't really comfortable on this sloppy track today but she has so much talent that didn't even matter. Her talent made all the difference." 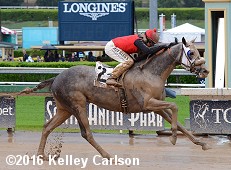 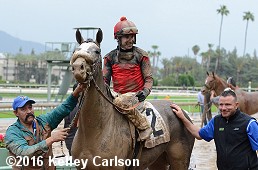 Winning jockey Joe Talamo said, "We had a good trip. Phil (D'Amato) just told me to ride him like Kent Desormeaux on Exaggerator, so we stayed in the five path and went from there. I thought the track was pretty fair for the first few races, and these last few you can come from behind; it feels great.