There were two graded stakes contested on the opening Saturday of the Saratoga summer meeting. The 30,708 fans in attendance braved high 80's temperatures and passing thunderstorms later in the card.

Jockey Paco Lopez sent 8-1 Isabella Sings to a clear lead first time by and she set fractions of 22.88, 47.28, and 1:11.08 through the driving rain while pressed by 12-1 Onus and stalked by 7-1 Mrs McDougal. Entering the stretch, Isabella Sings tired allowing Onus to inherit the lead through 1 mile in 1:34.64, but also weakened in the final furlong. Davita, last for the first 5f, came out 6 wide into the stretch and outfinished 9-1 Recepta by a nose for the win in 1:46.25 over the firm going. It was just a head back tio 29-1 Rainha Da Bateria third, and a nose more to late-running favorite Miss Temple City fourth. Julien Leparoux aboard Rainha Da Bateria claimed foul against winning rider Irad Ortiz Jr. aboard Dacita for interference but the claim was disallowed. 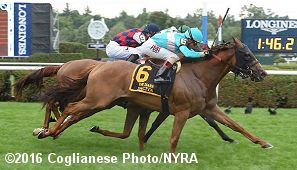 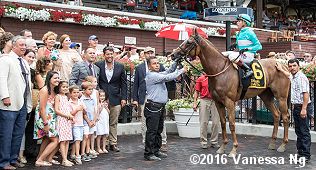 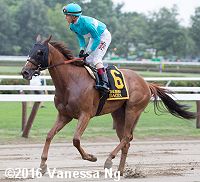 Left: Dacita in the winner's circle. Winning trainer Chad Brown said, "It was a lot to watch. In the end it was like a replay of the Ballston Spa last year when Dacita got up the last jump to beat Tepin. Similar finish here. Dacita loves Saratoga and she knows where the wire is. The first quarter there they were rolling along. I know they tried to slow it down some but it really set the tone for the race that someone from behind, or in mid-pack at worse, was probably going to have the best run. Irad was patient and worked out another great trip for Dacita, and she timed it just right."

Right: Dacita returns after the race. 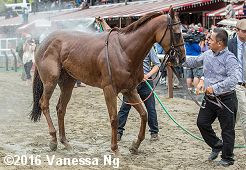 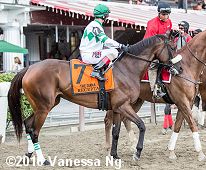 Left: Dacita gets hosed off after the race. Winning jockey Irad Ortiz Jr. said, "She's a nice filly. I got the perfect trip while saving ground. She came from last and come running at the end." Asked about the bumping he added, "They were coming out a little and we just had a little contact - brushing. My impression was that they came out more than anything." 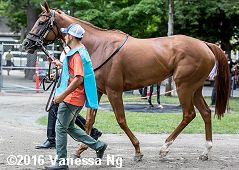 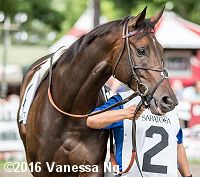 Left: Third place finisher Rainha Da Bateria in the paddock before the race. The Chad Brown trainee improved her record to 2 wins, 4 seconds, and 2 thirds in 15 starts, earning $383,836 for owner Three Chimneys Farm.

Right: Fourth place finisher and beaten favorite Miss Temple City in the paddock. The Graham Motion trainee has a record of 4 wins, 3 seconds, and 2 thirds in 12 starts, earning $601,038 for owners Sagamore Farm, Needle in a Haystack and The Club Racing LLC.


Four hours earlier under sunny skies, the $150,000 Sanford Stakes (G3) featured a short field of just 5 two-year-olds sprinting 6 furlongs on the main track. Bitumen, a 6 3/4 length debut winner at Churchill Downs, was sent off as the 9-10 favorite over 8-5 Random Walk, a debut winenr at Belmont, and 11-2 Bronson, winner of his debut at Monmouth.

13-2 Zartera was quickest away and set fractions of 22.61 and 45.79 while pressed by Random Walk and stalked by 17-1 Bay Numbers. Turning for home, Random Walk gained a short lead through 5/8 in 58.17, but Bitumen, fourth early, came through 2 wide to win going away by 1 3/4 lengths in 1:10.68 over the fast main track. It was a long 3 lengths back to pacesetter Zartera third. Jockey Irad Ortiz Jr. aboard Zartera claimed foul against Jose Ortiz aboard Random Walk for interference but the result stood. 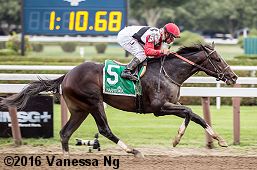 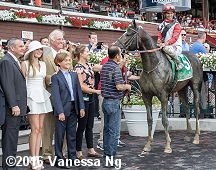 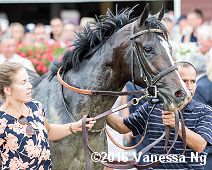 Left: Bitumen in the winner's circle. Winning trainer Eddie Kenneally said, "I'm delighted with performance, he ran really, really well. He got a great education today because he was in behind and took so much dirt. He overcame that and that goes to show how much class he has. He's a really nice horse. He galloped out good and ran a huge race. Today was a great foundation and education and will help him going forward."

Right: Bitumen heads back to the barn. Winning jockey Javier Castellano said, "He was very professional the way he did it, handling the dirt very well - three horses up on the lead with a lot of kickback, it hit him for the first time in the face. You kind of anticipate he wouldn't like it much, but he went through it. He figured it out really quick and turning for home he gave me great acceleration. Very professional. He didn't break too sharp out of the gate. I didn't want to rush up, I just wanted to do the right thing with the horse, and he showed me a lot of class. It worked out great, just perfect, three horses went into a speed duel, I took my time and when I asked, he responded very well." 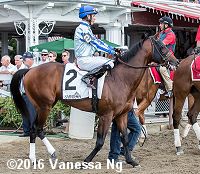 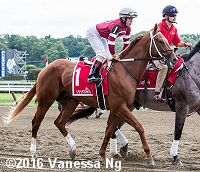 Left: Second place finisher Random Walk heads out to the track. Trainer Rick Violette said, "He ran terrific. He fell out of the gate and ran between two other horses; they were flying around there and he withstood them and shook them off. He went after the winner but we kind of set it up for them. He was very courageous, he really made another run even at the winner."