The Belmont Stakes Racing Festival runs from Thursday to Saturday, highlighted by the 148th Belmont Stakes run on Saturday. Friday had six stakes on the card, highlighted by the $500,000 New York Stakes (G2) at 1 1/4 miles on the inner turf for the distaffers. Friday afternoon had beautiful weather, with sunny skies and temperatures in the mid-70s, with a fast main track and firm turf courses. 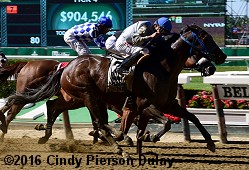 The first graded stakes of the Festival was the $250,000 True North Stakes (G2) for older horses sprinting 6 furlongs on the main track. After Private Zone scratched, just 5 faced the starter with Churchill Downs Stakes (G2) winner Catalina Red sent off as the 6-5 favorite over 2-1 Holy Boss, 4th in last year's Breeders' Cup Sprint (G1), and 5-2 Always Sunshine, winner of the Maryland Sprint (G3).

Jockey Irad Ortiz Jr. sent 12-1 longest shot Dads Caps to the lead through fractions of 22.44 and 44.71 while pressed by Catalina Red and stalked by Holy Boss. Entering the lane, Dads Caps continued to lead through 5f in 55.99, but 10-1 Joking, last early, came out 5 wide for room and rallied to win by a neck in 1:08.04. it was another 3/4 length back to Holy Boss third, while favorite Catalina Red was another neck back in fourth. 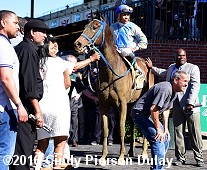 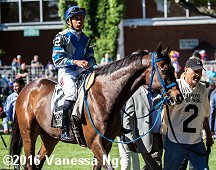 Left: Joking in the winner's circle. Winning owner-trainer Charlton Baker said, "I'm very impressed. He's doing great but today he was stepping up. I didn't know how he'd handle it. I know he's doing super and then again the track was fast all day. It seemed like speed was dominating. I was hoping he'd get there. He gives you that kick. He's got that killer instinct now that he wants to get there."

Right: Joking in the paddock before the race. Jockey Manny Franco added, "I just rode the way I usually do with him and just sat in the back, and when I was ready to make my move, I did it. It's the perfect distance for him because they put pace in front of him and he's coming on from behind. I tried to get out with a good trip and try to take advantage." 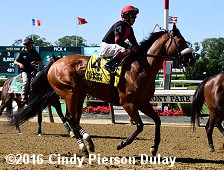 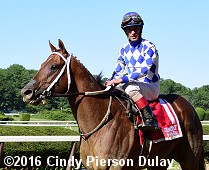 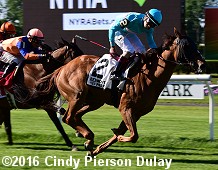 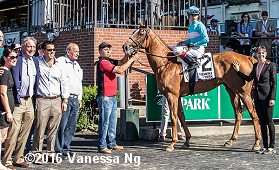 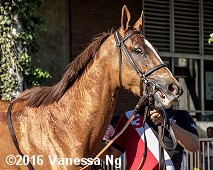 Left: Dacita in the winner's circle. Chad Brown, who trained the first three finishers, said, "All three horses ran terrific, so that makes the trainer happy."

Right: Dacita heads back to the barn after the race. Winning jockey Irad Ortiz Jr. said, "She ran really good. Chad brought her in ready and when I asked she was there for me and took off. Thankfully, we got to run our own race and she got a perfect trip." 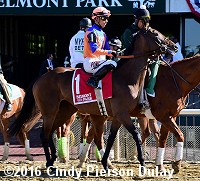 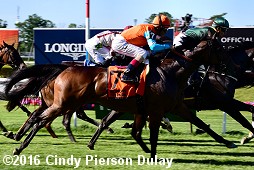 Left: Second place finisher and beaten favorite Sea Calisi in the post parade. Trainer Chad Brown said, "Sea Calisi, unfortunately, didn't get a great trip inside. I felt like if she could have gotten clear maybe she would have had a better kick than she showed, but that's turf racing, especially in a short field with moderate pace."

Right: Third place finisher Guapaza on the outside first time by. Trainer Chad Brown said, "And Guapaza, with not a clear challenger to the lone speed horse, Photo Call, someone had to go ahead and take the initiative and I'm glad Johnny [Velazquez] did that. I thought Guapaza did a lot of the heavy lifting. She wasn't pressuring her the whole race but at different times she tried her and kept it just honest enough. She really dug in gamely and was right there in the photo. I thought she ran an outstanding race. All three horses are nice." 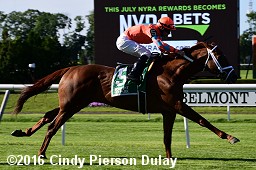 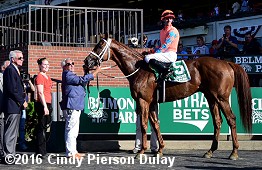 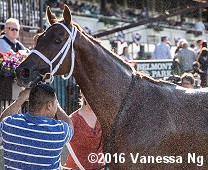 Left: Da Big Hoss in the winner's circle. Winning trainer Mike Maker said, "I thought we'd be a bit closer earlier, to be honest, but that's why I leg him up and let him make the decisions. He made the right move at the right time. I think it was the distance that made the difference. The horse was just crying out for more ground."

Right: Da Big Hoss gets hosed off after the race. Jockey Florent Geroux said, "It worked out good. There was plenty of speed in front of us and I was able to save ground most of the way and I just tipped him outside and from there he just took me there." 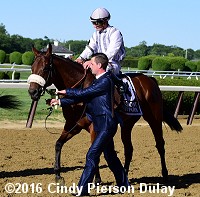 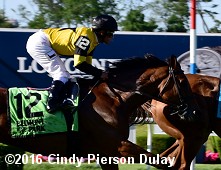 Left: Second place finisher and beaten favorite Now We Can returns after the race. The Nicolas Clement trainee improved his record to 7 wins, 3 seconds, and 1 third in 16 starts, earning $395,422 for owner Winfried Engelbrecht-Bresges. 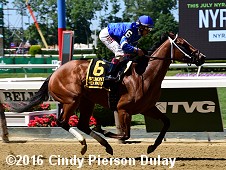 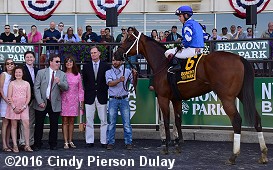 Winning trainer Kiaran McLaughlin said, "She's just an impressive filly. She's got a great disposition. She's a very kind filly and she can really run, so it was a great; that was a serious race. We're hoping to do what we did with Cavorting last year. The post position that allowed her to sit off of the early pace; two of them inside of her had speed. If we had been inside, we might've had to go ahead and go but sitting outside, she could do that. It was beautiful.” Jockey Irad Ortiz Jr. added, "She was prepared and ready to go. She pulled me home and was real excellent today." 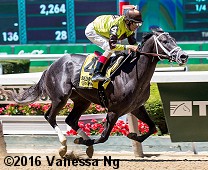 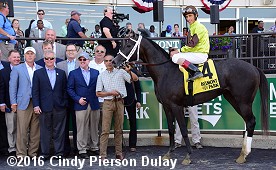 After 3 scratches, the $200,000 Tremont Stakes featured just 4 two-year-olds sprinting 5 1/2 furlongs. Jockey John Velazquez sent 5-2 third choice Silver Mission to the front and he set fractions of 22.99 and 45.89 while about 2 lengths in front of 11-10 favorite Hey Mike stalking in second. Entering the stretch Silver Mission powered away from the field under a hand ride, getting 5f in 57.61, and finishing up under wraps 6 1/4 lengths ahead of Hey Mike in 1:03.78. It was another 3 1/2 lengths back to 9-1 longest shot Pachi Cruze third, and 6 1/4 more to 2-1 second choice Saratoga Two Step fourth.

Winning trainer Todd Pletcher said, "We were a little concerned with the way the track seemed to be playing. We know it's not a long way to the turns. so you're not running into the headwind quite as much. These races, everybody's kind of done the same thing. Most of them are wire-to-wire, so you sort out who's the quickest. He caught a great start, Johnny was super impressed with the way he broke. It was his race to have from there." Velazquez added, "It was pretty easy. He broke well coming out of there. He got to the lead and he kept going. He handled it very well. He's pretty quick for a little guy. He's also pretty talented for as little as he is." 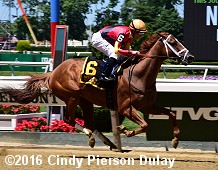 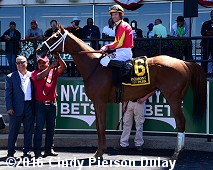 Winning trainer Mark Casse said, "We weren't sure about the 1 1/2 miles, but we said, 'Let's give it a try.' The (4f in 46.60) work sharpened her up. A mile and a half is a different kind of race and I didn't want her getting too far back. We got her into the race. She amazed me how well she finished. She really took off. I leave the trip planning to Julien. I never tell him much. I just told him we wanted to get her in the race early. She wouldn't get into the race the other day at Pimlico and it cost her the win." Leparoux added, "Everyone has to prove they can go that distance. We felt comfortable before the race that she would like it. She's a big-stride filly and just kept going. It was a good trip for her."