The record 131,680 in attendance at Pimlico for the Preakness Stakes (G1) were treated to a marathon 14-race card with the first race off at 10:30am. Conditions were less than ideal, as rains earlier in the day downgraded the sealed main track to muddy and the turf course to good, with temperatures in the high 50's. 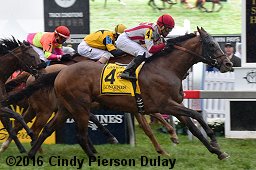 A field of 8 older horses went 1 1/8 miles on the turf in the $250,000 Longines Dixie Stakes (G2). Breeders' Cup Mile (G1) third place finisher Grand Arch was sent off as the 2-1 favorite. In to challenge him included 5-2 second choice Ring Weekend, winner of the Frank Kilroe Mile (G1), and 7-2 third choice Takeover Target, second in the Danger's Hour Stakes.

Martin Pedroza sent 17-1 longhest shot El Kabeir to a clear lead first time by through fractions of 23.94 and 48.56 while as many as 2 1/2 lengths ahead of Grand Arch and 7-1 Za Approval. On the far turn Grand Arch hained the lead through 3/4 in 1:12.94 and held the lead to midstretch through 1 mile in 1:38.83. However Takeover Target, last through 3/4 mile, came out 7 wide into the lane and outfinished Ring Weekend by a neck in 1:44.76 over the good course. It was another 1/2 length back to Grand Arch third.
Full results chart from DRF 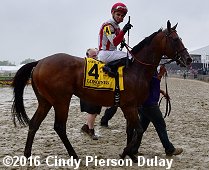 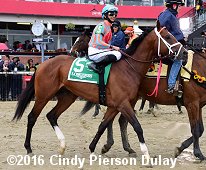 Left: Takeover Target heads to the winner's circle. Dermot Megner, assistant to winning trainer Chad Brown said, "It was a great performance and a great ride and a great stretch run. We're really proud of him." Winning jockey Joel Rosario said, "We got a good start and we had a good position. The horse in front of me started to stop and I had to take hold because there was another horse coming up outside of me. He got right back in stride though. He is always close and I knew that he would be today. The turf is fine, just wet from the rain. He had a pretty good trip."

Right: Third place finisher and beaten favorite Grand Arch in the post parade. Jockey Luis Saez said, "He had no excuses. We had a fine trip." 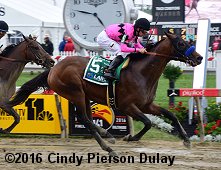 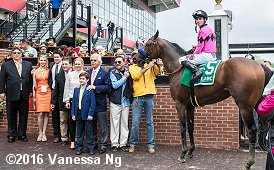 American Freedom in the winner's circle. Winning jockey Florent Geroux said, "Bob (Baffert) told me, ‘Make sure you break nice and clean and try to put him in the race without using him like crazy.' I was able to sit second, nice and comfortable; when the horse came outside of me, my horse felt him and responded very well, and he was very game all the way to the wire." Trainer Bob Baffert added, "It looked like he was almost done, and then he came back. We've always been really high on this horse. Hopefully, he has a great summer in front of him." 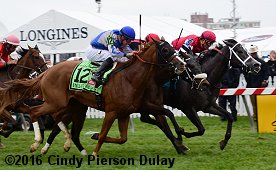 A field of 11 older fillies and mares contested the $150,000 Stella Artois Gallorette Handicap (G3) over 1 1/16 miles on the turf. 5-1 Mizz Money and 4-1 Josdesanimaux dueled on the front end through fractions of 24.19, 50.18, and 1:15.13 while stalked by 15-1 Ginger N Rye and 8-1 Ol' Fashion Gal. At the top of the lane Josdesanimaux continued to hold a short lead but tired in the final furlong. Mizz Money took over the lead for good and held off late-running 76-1 longest shot Vielsalm by a head in a new course record time of 1:39.73 over the good turf course. It was a nose back to 9-2 Heath third.
Full results chart from DRF 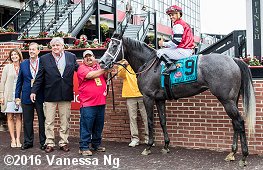 Mizz Money in the winner's circle. Winning trainer Bernard Flint said, "What a hard-fought race. My heart was pounding all the way through the stretch and everybody took their shots at her, but she was best today. I knew the forecast called for heavy rain and I was just hoping it would stay good enough for it to stay on the turf, because I didn't want to run her on an off track. This is special because we bred her and it's like having one of your children go out and succeed." 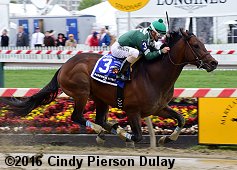 Kicking off the Preakness Day stakes action, the $150,000 Sagamore Spirit Maryland Sprint Stakes (G3) featured a field of 7 older horses sprinting 6 furlongs on the main track. Jockey Florent Geroux sent 2-1 third choice Cinco Charlie to the front through fractions of 23.54 and 46.75 while stalked by 9-5 second choice Always Sunshine and 15-1 All Star Red. Entering the lane Always Sunshine took over from the tiring pacesetter, and drew off to win by 2 1/2 lengths over All Star Red in 1:10:49. It was 2 more lengths back tio late-running 54-1 longest shot Rockinn On Bye third, while 6-5 favorite Salutos Amigos checked in 5th.
Full results chart from DRF 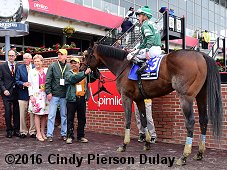 Always Sunshine in the winner's circle. Winning trainer Ned Allard said, "I was very confident going in. I was really up for this horse's race. He's such a nice horse. He's turned into a monster. He's one of those horses that trains like a good horse, acts like a good horse, and now he has to go out and prove it. He's on his way to doing that." Jockey Frankie Pennington added, "He took the lead, so we figured we'd sit outside. We got there and he was doing it very comfortably and easily. At the 1/4 pole, I asked him, he took off and did it easily. The track is great and he handled it beautifully." 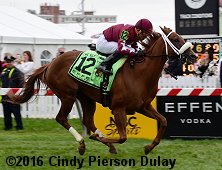 A field of 12 older fillies and mares sprinted 5 furlongs on the turf in the $100,000 The Very One Stakes. 36-1 Everything Lovely was quickest away and opened up a 2 length lead down the backstretch through an opening quarter of 22.33 over the good turf while pressed by 9-2 Exaggerated and stalked by 2-5 favorite Lady Shipman. Entering the stretch Lady Shipman took over on the outside and drew off to win by 2 1/4 lengths over late-running 14-1 Joya Real in 57.85 seconds. It was a head back to Exaggerated third.
Full results chart from DRF 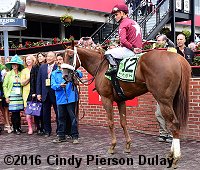 Lady Shipman in the winner's circle. Winning jockey Joel Rosario said, "She broke just a little bit slow because she was way on the outside. I sent her a little bit, and she covered a lot of ground really quickly. The more that I asked her, turning for home, the more I asked her, the more she was giving to me. I think (she can run in the Breeders' Cup Turf Sprint). The more you ask, the more she'll give it to you. The way she broke, the way she did it, it was very impressive to me." 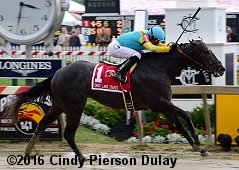 The $100,000 Chick Lang Stakes featured a field of 7 three-year-olds sprinting 6 furlongs on the main track. Jockey Martin Pedroza sent 4-5 favorite Justin Squared to the lead exiting the chute and he set fractions of 23.01 and 46.17 while about 2 lengths ahead of 45-1 Formal Summation stalking him in second. Entering the lane Justin Squared opened up a 4 length advantage through 5/8 in 58.38, and easily held off late-running 2-1 second choice Counterforce by 2 lengths in 1:11.41. It was another 2 lengths back to Formal Summation third.
Full results chart from DRF 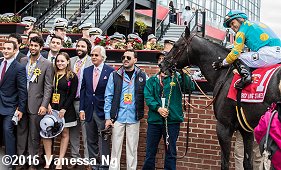 Justin Squared in the winner's circle. Winning trainer Bob Baffert said, "He's an extremely fast horse. We're just going to slowly try to get him to the Breeders' Cup Sprint. He's ridiculously fast. I loved Chick Lang. You'd get here and he'd tell you the history. He loved the horses and he loved the horsemen. Fortunately, this is the second time we've won it. It was for the Zayats, too. It's good to see those colors back in the winner's circle here." 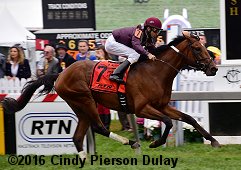 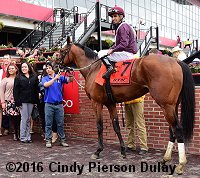 Marengo Road in the winner's circle. Winning trainer Michael Trombetta said, "He runs well on all surfaces, although I may keep him on the grass after this performance. After he won the Miracle Wood he got sick two days before the next race we planned to run him in. At Laurel last fall, we weren't able to get a race after the close of the turf, so we tried him in the Private Terms. I don't have a plan for him but like I said I will likely try to keep him on the turf."