The filly counterpart to the Preakness is the $250,000 Black-Eyed Susan Stakes (G2) held on the Friday before Preakness day. In stark contrast to the forecasted rains expected to fall all day Saturday, the Preakness Eve record 47,956 fans in attendance enjoyed ideal racing conditions, with a fast track and firm turf, mostly sunny skies and temperatures in the low 70's. A field of 12 three-year-old fillies went to post for this 1 1/8 mile main track contest, with Fair Grounds Oaks (G2) winner and Kentucky Oaks (G1) runner-up Land Over Sea sent off as the 8-5 favorite. In to challenge her included 9-5 second choice Go Maggie Go, winner of the Gulfstream Oaks (G2) but 4th in the Kentucky Oaks, and 5-1 third choice Kinsley Kisses, third in the Beaumont (G3). 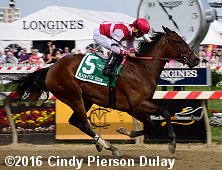 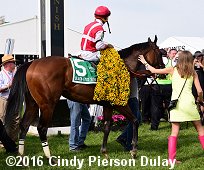 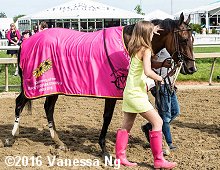 Left: Go Maggie Go heads to the winner's circle. Winning trainer Dale Romans said, “This is such a special race in a special city that still loves horse racing so much and treats us all with such open arms when we come to town. I tell everyone that the Kentucky Derby is the most intense race in the world, this is the most fun for horsemen. We get out of that boiler pot over there and we come here, and Baltimore just opens its arms to us. We love it here.”

Right: Go Maggie Go heads back to the barn after the race. 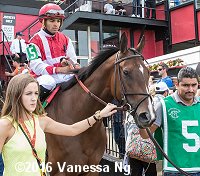 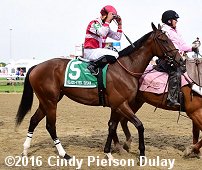 Left: Go Maggie Go heads out to the track before the race. Jockey Luis Saez said, When she broke from the gate (in the Kentucky Oaks) she got a little bothered and then we came from far back. She made a move but we lost a lot of ground. Today she got a nice trip. I didn’t want to be in that position, but when we came to the first turn I was right there and I had to let her run.”

Right: Go Maggie Go in the post parade. Trainer Dale Romans added, “She should have been closer to the pace in the Oaks. She crossed her legs and when they were straightening her up they sprung the latch and she just got left behind. That’s what showed me the quality filly that she is, because she had been close to the lead in her two previous starts and she got all the dirt and still came running. When she left there clean today, I didn’t think they were going to beat her.” 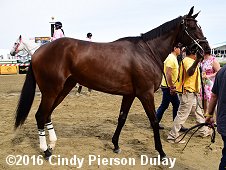 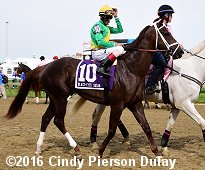 Left: Second place finisher Ma Can Do It walks over to the paddock before the race. Jockey Brian Hernandez Jr. said, “I had a great trip, and was able to save ground all the way around. She broke well and I was going to be forwardly placed but when I saw (Go Maggie Go) in front of me I let her go. Dale (Romans, trainer of the first two) told me to ride her with confidence. For a maiden to come back like that (in the stretch) against stakes winners, that’s really good.”

Right: Third place finisher Kinsley Kisses in the post parade. Jockey John Velazquez said, “We had her basically in a perfect spot. We just didn’t have enough at the end.” 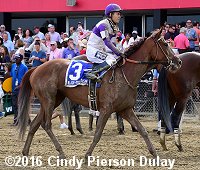 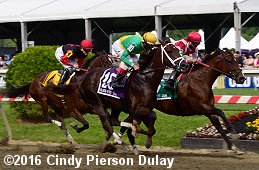 Left: Sixth place finisher and beaten favorite Land Over Sea returns after the race. Trainer Doug O'Neill said, “Just a rough trip. She didn’t break real good. They kind of went slow early and she was a victim of a rough trip. Thank God she came back good and Mario (Gutierrez) came back good. We’ll live to fight another day. We’re just fired up about tomorrow.”

Right: Shortly after the start of the Black-Eyed Susan with eventual winner Go Maggie Go vying for the lead on the inside with third place finisher Kinsley Kisses and second place finisher Ma Can Do It just behind. 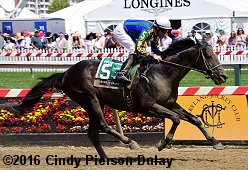 The co-feature on Friday is the $300,000 Pimlico Special (G3). A field of 6 older horses contested this historic 1 3/16 mile trip, with last year's Stephen Foster Handicap (G1) winner Noble Bird sent off as the 4-5 favorite over 7-2 Savoy Stomp, 4th in the Skip Away (G3), and 4-1 Idolo Porteno, 8th in the Elkhorn. Jockey Julien Leparoux sent Noble Bird to the front immediately and he set fractions of 23.53, 47.48, and 1:12.12 over the fast track while stalked by 47-1 longest shot Warrioroftheroses. Entering the stretch, Noble Bird pulled away from the field getting 1 mile in 1:36.80, and finishing up 11 1/4 lengths ahead of Idolo Porteno in 1:55.18. It was another 6 lengths back to Warrioroftheroses third. 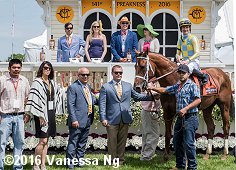 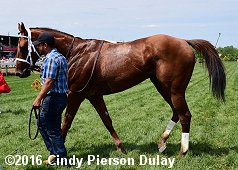 Left: Noble Bird in the infield winner's circle. Winning trainer Mark Casse said, “It was the exact opposite of what happened to him last time. Before his last start, I told a couple news people that I’ve been doing this for 37 years and he’s one of the toughest horses I’ve ever trained. After his last race, ‘No, he’s the toughest.’ He makes good riders look bad. He’s so sensitive about his mounts. As a 2-year-old, I told Mr. Oxley that this horse was going to win the Kentucky Derby, that’s the ability that he displayed. He’s his own worst enemy. Today? That’s how good he is. They went the half-mile in 47 and Julien thought they went in 50. He’s just a really talented horse.”

Right: Noble Bird goes back to the barn after the race. Winning jockey Julien Leparoux said, “The last time I rode him he didn’t break good. This time I learned from that. I thought just be patient with him. The key for today was to let him alone. He relaxed beautifully. I tried to sit behind (Warrioroftheroses) but he wanted to go. He likes being out front looking at everything.” 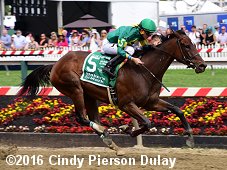 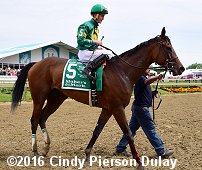 Winning trainer Neil Howard said, “I was thrilled. She’s such a nice filly. All of these races are so damned tough. It was an honest pace, she really dug in down the stretch. You’ve got to give it to Stoneway (Farm). That’s what they do, breed and race these kinds of horses. I love coming here, winning here is terrific. You know wha? I’m glad to win a maiden race, any race, so this is great. She’s pretty consistent.” Jockey Brian Hernandez Jr. added, She left there on the button today and put us where we needed to be. I got a little nervous going around the second turn that (Super Majesty) would kick on, but when I nudged on my filly she went after it really nicely and finished it off great. I was about two lengths off of it on the outside. She’s such a big rangy filly that she’s better on the outside and getting a good rhythm about her.” 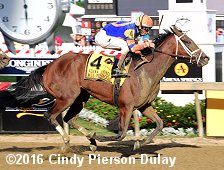 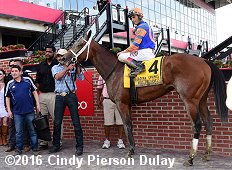 Closing out the Friday stakes action. a field of 10 three-year-old fillies sprinted 6 furlongs in the $100,000 Miss Preakness Stakes (G3). 14-1 Quick Release was fastest away through fractions of 22.69 and 45.94 while pressed by 4-1 Moment is Right and stalked by 5-2 favorite R Girls a Charmer Into the stretch, Quick Release continued to lead through 5/8 in 58.46, but 7-2 second choice Lost Raven, 8th early, came out 5 wide into the lane and rallied well to win by 3/4 length over fellow deep closer 17-1 One True Kiss in 1:11.43. It was another 1 1/4 length back to Quick Release third, while favorite R Girls a Charmer faded to 8th.

Winning trainer Todd Pletcher said, “I was a little concerned because she’s never been that far back in her career. I knew that 22-and-change at Pimlico is flying, so I was hoping the fractions were fast enough to allow her to come from behind. It’s really exciting for us to be associated with Uncle Mo, not only when he was racing but to see his stud career get off to this historic beginning." Jockey John Velazquez added, "I had to change what I wanted to do, just kind of bide my time and encourage her little by little and try to get a spot at the 3/8 pole. Once she got running, I was running out of goggles (because of dirt of them). I couldn’t see where I was going. I pulled the last goggle right before going to the 1/4 pole, and I saw a little seam and I got through there and then she came running. After that." 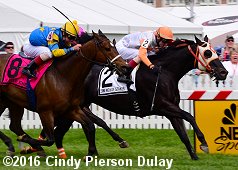 The $100,000 Jim McKay Turf Sprint featured a field of 8 older horses going 5 furlongs on the turf. 4-5 favorite Rocket Heat was allowed an uncontested lead as he posted fractions of 21.46 and 44.04. At the top of the lane, 10-year-old 4-time winner of this race and 5-2 second choice Ben's Cat, 4th early, closed through traffic to win by a neck over 26-1 Spring to the Sky in 56.10. It was 1/2 length back to pacesetting favorite Rocket Heat third. 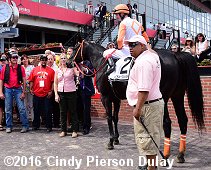 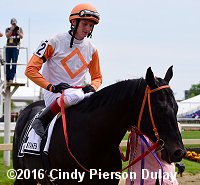 Winning trainer King Leatherbury said, "I know he brings tears to my eyes when he runs a race like that. It proves that thrills don't weaken your health because I would have been dead a couple of years ago. The last time he won a race five times they discontinued the race; that was the Maryland Million Turf Sprint. They said you won it enough, we're not going to have it anymore. Hopefully, the Jim McKay will be back again next year." Winning jockey Trevor McCarthy added, "I've never seen a horse like that. He loves to run at something and he was running up the fence, running up the fence, and I had to wait a minute before I swung him out. I knew once I got in the clear he was going to re-break. He's unbelievable." 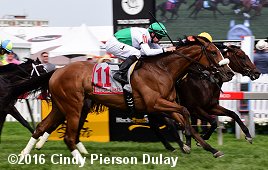 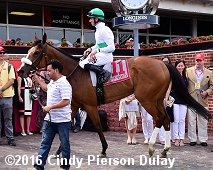 Winning trainer Michael Matz said, “I'm just delighted, Just delighted. She got a little wound up in the paddock, so I'm glad she handled everything well and ran her race." Jockey Florent Geroux added, “It worked out great. We let them go early and she relaxed early pretty good toward the rear. When it was time to go, she gave me a good kick. You don’t know how it will work out until the gates open. In the stretch, I was looking inside and saw (Family Meeting) coming. She was coming real fast, but we got the job done.” 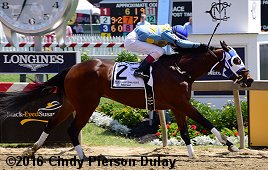 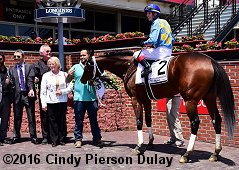 Kicking off the Preakness weekend stakes action, the $100,000 Skipat Stakes featured a field of 7 older fillies and mares sprinting 6 furlongs. 9-2 second choice Disco Chick was sent to the front by Trevor McCarthy through fractions of 23.21 and 45.83 while stalked by 1-5 favorite Fantastic Style. Into the lane, Disco Chick drew off through 5/8 in 57.81, and finished up 8 lengths in front of late-running 67-1 Dallas Cowgirl in 1:10.33. It was a length back to Fantastic Style third.

Winning trainer Mario Serey Jr. said, "The owner gave her to me when she was 2. I saw the potential, but when she was young, she didn't know what she was doing. She has been growing up in the body, and last year she told me that she needed to be a speed filly." Jockey Trevor McCarthy added, "She has run some awesome races in Maryland. All she needed was to get away from Lady Sabelia."