The $500,000 Stephen Foster Handicap (G1) is Kentucky's premier race for older horses, run at 1 1/8 miles over the Churchill Downs main track, with the winner automatically qualifying for the Breeders' Cup Classic (G1) under the "Win and You're In" scheme. Conditions were excellent on Saturday night, with cloudy skies and temperatures in the mid 80's. Lea was sent off as the 9-5 favorite in the field of 7 off his third place finish in the Dubai World Cup (G1). In to challenge him included 3-1 second choice Hoppertunity, third in the San Antonio (G2) last out, and 7-2 third choice Commissioner, winner of the Pimlico Special (G3).

Jockey Robby Albarado sent 16-1 Paganol to a clear lead first time by and he set fractions of 23.39, 46.81, and 1:10.93 while as any as 2 lengths in front of 9-2 fourth choice Noble Bird stalking him in second. Entering the stretch, jockey Shawn Bridgmohan sent Noble Bird past the tiring pacesetter, opening up a 1 1/2 length lead through 1 mile in 1:35.04. Favorite lea, 4th early, put in a late rally but Noble Bird held him off by a neck for the win in 1:47.94 over the fast main track. It was a long 5 1/2 lengths back to Hoppertunity third. 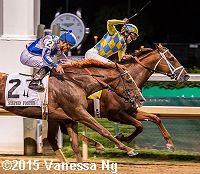 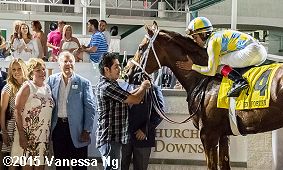 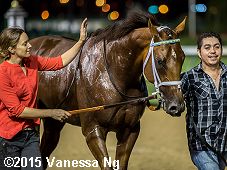 Noble Bird in the winner's circle. Norm Casse, assistant to winning trainer Mark Casse said, "He just ran in the Alysheba and ran a really big race in that, and he's just gotten better from there and he rewarded our confidence. Last summer we had him here before we went out to Del Mar and I told Dad (trainer Mark Casse) back then that I thought that he was a very talented dirt horse. Things just didn't happen that way and then he went to Oaklawn and he had to run on the dirt obviously. I just think that's a testament to how gutsy this horse is. He's trained extremely well and he wanted to win just as bad as we did. We'd probably have to look at the older horse races at Saratoga. I think he deserves to be in that discussion."

Right: Noble Bird heads back to the barn. Winning jockey Shaun Bridgmohan said, "He won three out of his last four races. He's getting better. He's been working like this in the morning so this performance was expected. That (Lea) is why I didn't turn my stick over; I just kind of gave him a little reminder because he was trying and giving me everything he had. He's been training very well and he's a horse that is on the improve. He just ran lights out tonight. He's been maturing and I think he's going to be a horse to watch for. I think in every race he's improved and he's not lacking any talent. He's a very talented horse." 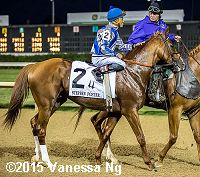 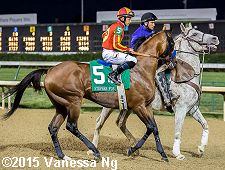 Left: Second place finisher and beaten favorite Lea in the post parade. Trainer Bill Mott said, "He had a good trip and he ran well. We just couldn't get there. It looked like if they'd gone three more jumps we could have had him, but the race was 1 1/8 miles. It wasn't 1 1/8 and three or four jumps. He'll run in the Whitney." Jockey Joel Rosario added, "Every time I came to (Noble Bird), he just kept on going. My horse ran well and he did everything well, but every time I began to get to the winner, he would respond. For a second I thought I would get there, but every time I came to him he would just keep on going."

Right: Third place finisher Hoppertunity in the post parade. Jockey Mike Smith said, "He broke okay and I felt pretty good because the pace was pretty honest. They were moving right along. I thought I was in a great spot, but they just kept running. I had no excuse. The air's a bit thick tonight for these California horses, but he warmed up really good. I secured third but he just didn't gain any ground. There wasn't any use to urge him any more to get a half-length closer." 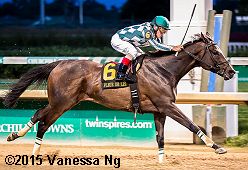 The $200,000 Fleur de Lis Handicap (G2) featured a filld of 9 older fillies and mares going 1 1/8 miles on the main track, with the winner earning entry into the Breeders' Cup Distaff. Royal Delta (G2) winner Sheer Drama was sent off as the 8-5 favorite off her close second in the La Troienne (G1). In to challenge her included 3-1 Gold Medal Dancer, third in both the Apple Blossom (G1) and La Troienne, and 7-2 My Sweet Addiction, winner of the Vanity (G1). 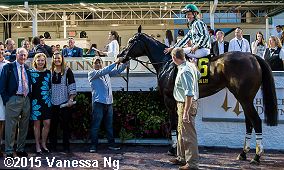 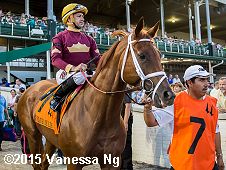 Left: Frivolous in the winner's circle. Winning trainer Victoria Oliver said, "It's a very big win for her. I've always believed in the filly. She dances every dance. I don't know what happened on Oaks Day, but she showed up today. She loves this track. I don't know where we'll go next but we're just going to enjoy this win and look for a race a little later. This was a ‘Win and You're In' so we'll just pick our spots and hopefully get here there in the fall."

Right: Second place finisher and beaten favorite Sheer Drama heads out to the track before the race. Trainer David Fawkes said, "I thought we were in the perfect position, we just couldn't get by her. (Sheer Drama) ran a big race tonight." 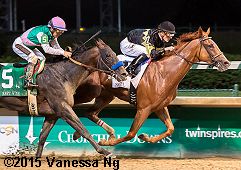 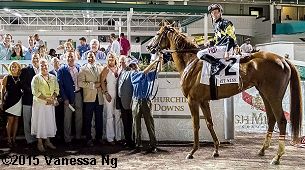 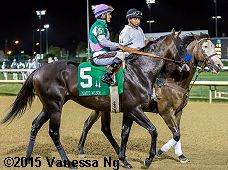 Left: Island Town in the winner's circle. Winning trainer Ian Wilkes said, "Naturally off the race on Derby Day, he ran a tremendous race that day and I thought this would be a good spot at his home track. He's won here twice and we can stretch him out and try him around two turns. He's a seriously talented horse; we always thought that. He just took a long time to come around. I never rushed him and he's one that's found his way along. He's seriously talented. We don't know how good this horse is yet. He showed a new dimension today. He laid on the front end and they went really slow and to so that coming away where he closed a few times is tremendous. I'm going to enjoy this but the Indiana Derby is a logical spot for him." 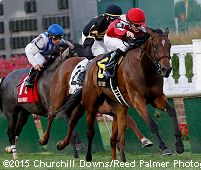 Winning trainer Chris Block said, "The 1 1/8 mile was very enticing for me. I had the older siblings and they could go that far. Her last race was run weirdly, but she bounced out of it really quickly. I thought that looking at the spot it would be a good chance to win a Grade III with her and it worked out well in the end. With two races back-to-back like this she'll need some time. The ultimate goal would be the Pucker Up at Arlington, but I'll have to see what I can find."

Right: Second place finisher Lady Zuzu heads out for the post parade. Jockey Robby Albarado said, "(The start) didn't matter, she got settled in nicely, it was to her benefit. I thought she got pinched but she settled nice, took over the field on the backside and she finished well."