The feature race on Sunday at Saratoga was the $350,000 Alfred G. Vanderbilt Handicap (G1), one of the premier races for older sprinters on the east coast. A field of 8 went to post in this 6 furlong main track event under partly cloudy skies and temperatures in the low 80's. Last year's Amsterdam (G2) winner Holy Boss was sent off as the 3-1 favorite off a 3rd place finish in the True North (G2). In to challenge him included 9-2 second choice Delta Bluesman, winner of the Smile Sprint (G2), and 19-4 third choice A.P Indian, winner of the Belmont Sprint (G3).

Delta Bluesman was quickest out of the gate posting an opening quarter of 22.26 before A.P. Indian took over at the end of the backstretch through a half in 44.63 while pressed by Delta Bluesman and stalked by Holy Boss. Entering the lane A.P. Indian continued to lead through 5/8 in 56.17. Holy Boss attempted to close but A.P. Indian easily dismissed him, pulling away to a 1 1/4 length win in 1:08.25. It was another 1 1/2 lengths back to 8-1 Catalina Red third.

The Jim Dandy and Amsterdam Stakes also on the card 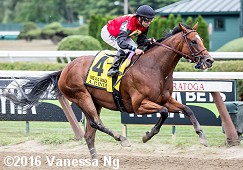 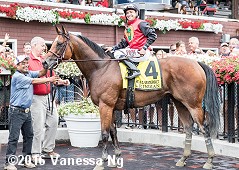 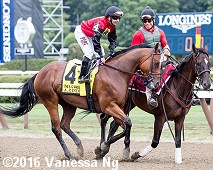 Left: A.P. Indian in the winner's circle. Winning trainer Arnaud Delacour, celebrating his first career Grade 1 win, said, "I thought he fitted well with these horses. It was a little tricky, but knowing he's in good form right now, we thought we had a shot. I had a lot of faith in the horse. If you like at his career, he's had some minor setbacks. But all the time he comes back. He seems to come back even stronger. It's worth giving him time for that. We'll see how he comes back. He ran three weeks and three weeks before. We'd love to see how he comes back. It's a little too far away [the Breeders' Cup]. We'll see."

Right: A.P. Indian in the post parade. Winning jockey Joe Bravo said, "He's pretty nice isn't he? He breaks great. When you have good horses like that they make you look good by hanging on. The [final time] is [asking] a lot to go over a course like this, but the most impressive part is that you got Holy Boss and another very fast horse on the inside, huge competition. Overcoming that is really cool." 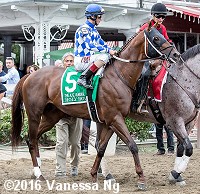 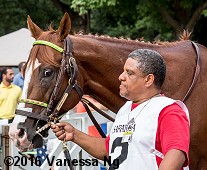 Right: Third place finisher Catalina Red in the paddock before the race. The Jorge Navarro trainee improved his record to 5 wins, 1 second, and 3 thirds in 12 starts, earning $519,885 for owner Anthony Lenci.


The $250,000 Bowling Green Stakes (G2) featured a field of just 4 older horses (after the scratch of Danish Dynaformer) going 1 3/8 miles around 3 turns of the inner turf course. Manhattan (G1) winner Flintshire was the 1-10 favorite. In to challenge him included 7-1 Grand Tito, 4th in the Manhattan, 9-1 Can'thelpbelieving, 5th in the United Nations (G1), and 10-1 Twilight Eclipse, third in the Belmont Gold Cup.

Jockey Jose Ortiz sent Grand Tito to the front and he set fractions of 26.53, 53.14, 1:19.44, and 1:44.20 over the firm going while pressed by Can'thelpbelieving and stalked by Flintshire. Entering the lane Grand Tito continued to lead through 1 1/4 miles in 2:07.34, but Flintshire switched to the outside and rallied to get up by 3/4 length in 2:18.24. It was another length back to Twilight Eclipse third, and 1/2 more to Can'thelpbelieving fourth. 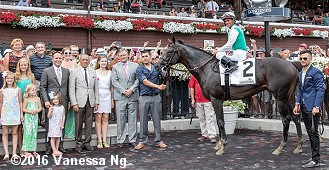 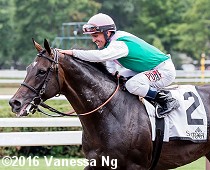 Left: Flintshire in the winner's circle. Winning trainer Chad Brown said, "When you have a 1-9 shot, there's a lot of pressure. The other riders don't give you anything, and they shouldn't. But it all worked out. I couldn't be more pleased with his effort. We don't have too many star horses in the game, and there seems to be several running at the Spa, and he's one of them. My thought process with choosing this race was that it was too long a space for me between the Manhattan the Sword Dancer. I just wanted to run this horse out of his own stall all the way up the Breeders' Cup. I wasn't interested in putting him on a plane to Arlington. This race made sense and it all worked out."

Right: Flintshire gets a pat as he returns after the race. Winning jockey Javier Castellano said, "I've been watching all the races in his career and I've seen him win in Japan and Hong Kong. The horse, he likes to cover up. As long as he covers up, he gives you that power and kick. I was a little concerned with not that many horses in the race. I wanted to be covered up and when turning for home finding his speed, I was going outside and he got out tremendous, a powerful kick. He is a great horse you don't see too many horses like that. He's the best horse on the turf in the world." 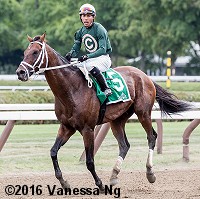 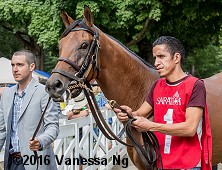