There were four graded stakes contested on the second Saturday of the Saratoga summer meeting. Conditions were excellent with sunny skies and temperatures in the low 80's at the historic oval.

The $600,000 Jim Dandy Stakes (G2) is the major local prep for the Travers (G1) to be run 4 weeks later. After 3 scratches, a short field of just 4 three-year-olds contested this 1 1/8 mile main track test, with Belmont Stakes (G1) runner-up and Wood Memorial (G1) winner Frosted sent off as the 3-4 favorite. In to challenge him included 9-5 second choice Texas Red, winner of the Breeders' Cup Juvenile (G1) but second in both the San Vicente (G2) and Dwyer (G3), and 7-2 third choice Japan, winner of the Easy Goer. 14-1 Frammento completed the field, unraced since fifth in the Belmont.

Jockey Junior Alvarado sent Japan to the lead first time by and he set fractions of 24.37, 48.15, and 1:11.92 while 1 1/2 lengths ahead of Texas Red stalking him second, in turn 2 lengths clear of favorite Frosted third. Entering the stretch, Texas Red came out 3 wide for room, and swept to the lead, getting the mile in 1:36.15. Frosted attempted to close late but Texas Red held him off by 1/2 a length in 1:48.77 over the fast main track. It was another 3 3/4 lengths back to Japan third, and 7 more to Frammento last. 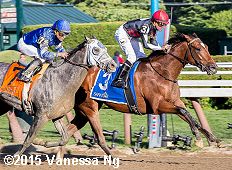 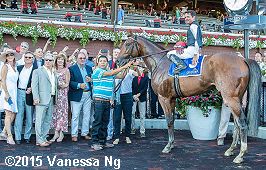 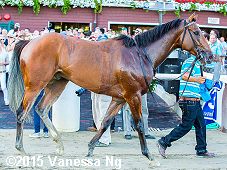 Left: Texas Red in the winner's circle. Julie Clark, assistant to winning trainer Keith Desormeaux said, "He's been doing really well at Saratoga. We got a lot out of that bullet work last weekend. He has been training really well. Kent basically said the ride he gave him was the trip he was planning, so we went with him. We trust him. I'm sure proud of him (Texas Red)."

Right: Texas Red heads back to the barn. 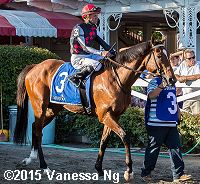 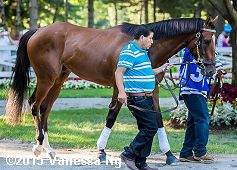 Left: Texas Red heads out for the post parade. Jockey Kent Desormeaux said, "He just galloped along to the quarter pole. I had so much left that I got to the front quicker than I thought I would. He kind of idled on the lead a little bit that last 3/16 mile, but when challenged he had tons left. The most encouraging thing about the entire ride was the energy left galloping out. I think I'm sucking more wind than he is from the race."

Right: Texas Red in the paddock. Desormeaux added, "I think he can only improve. He's a huge-striding, real-estate loving kind of horse. He loves two turns and the further they get to do something like that I think the more of him. His true superior athletic ability to get 1 1/2 and 1 1/4 is what he is best at." 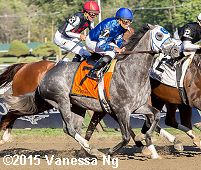 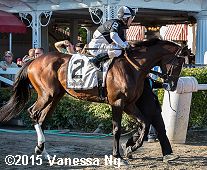 Left: Second place finisher and beaten favorite Frosted shortly after the start. Trainer Kiaran McLaughlin said, "We got beat. Frosted ran very well, a nice horse won it. We gave the winner four pounds. We came to win the race but we couldn't get by. Four-horse races are always tricky, but it will be a different race in four weeks. You just don't know what's going to happen, he ran well, but hopefully he will be better in (the Travers)."


Kicking off the stakes action on Saturday was the $200,000 Amsterdam Stakes (G2) for 3-year-olds sprinting 6 1/2 furlongs on the main track. Barbados was sent off as the 2-1 favorite in the field of 6 off his second place finish in the Carry Back (G3). In to challenge him included 9-4 second choice Holy Boss, winner of the Chick Lang at Pimlico last out, and 5-2 third choice March, winner of both the Bay Shore (G3) and the Woody Stephens (G2). 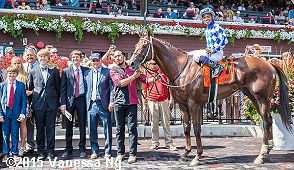 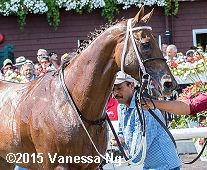 Left: Holy Boss in the winner's circle. Winning trainer Steve Asmussen said, "I love him winning a race on this stage. His Chick Lang validated what we thought we were seeing at Oaklawn. He ran really well there. We're trying to use this as a prep for the King's Bishop. You're just happy to see him handle the surface here; it's not for all of them. I thought if anything he showed more maturity today than he has in any of his previous races, and looked very good to the wire. I thought the horse looked the picture; he's been training really well and we expected a big race. You want to see all of those signs from here to the King's Bishop."

Right: Holy Boss heads back to the barn after the race. Winning jockey Ricardo Santana Jr. said, "It was a perfect race for him. I saw an open spot as I was turning into home. I asked him to go and he did." 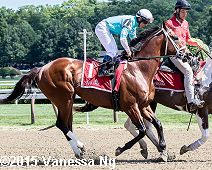 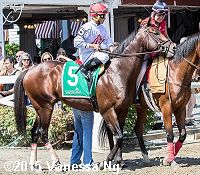 Left: Second place finisher Requite in the post parade. Jockey Javier Castellano said, "I had a beautiful trip. I saved all the ground stalking on the inside on the rail; that's where I wanted to be. I give the winner credit he was much the best. I had a perfect trip, he was just second best today."

Right: Third place finisher and beaten favorite Barbados heads out to the track before the race. The 2-1 choice stalked the pace 2 lengths off under Luis Saez, then tired late to finish third beaten 6 lengths. The Michael Tomlinson trainee improved his record to 3 wins, 2 seconds, and 1 third in 7 starts, earning $254,220 for owner Suzanne Stables LLC. 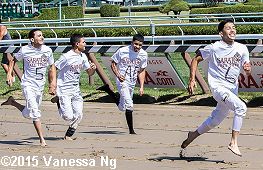 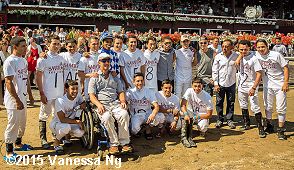 Earlier in the card, the jockey colony competed in a 1/16 mile foot race out of the starting gate in support of the Permanently Disabled Jockeys' Fund. Many of the riders competed barefoot or in socks and played up acting like a horse. Angel Cruz, new to Saratoga this season, won by 4 lengths over Junior Alvarado.

Cruz said, "It felt good to win. It's been an amazing day. It's brought a lot of funds for the guys who can't ride anymore and it's an accomplishment for all of us jockeys."